#BNShareYourHustle: BeAdornedbyYettie is Your One-Stop Shop for African Inspired Fashion

Are you an Agricultural Entrepreneur? Here's a Chance to apply for the FCMB Agritech EPIC Pitch 2020 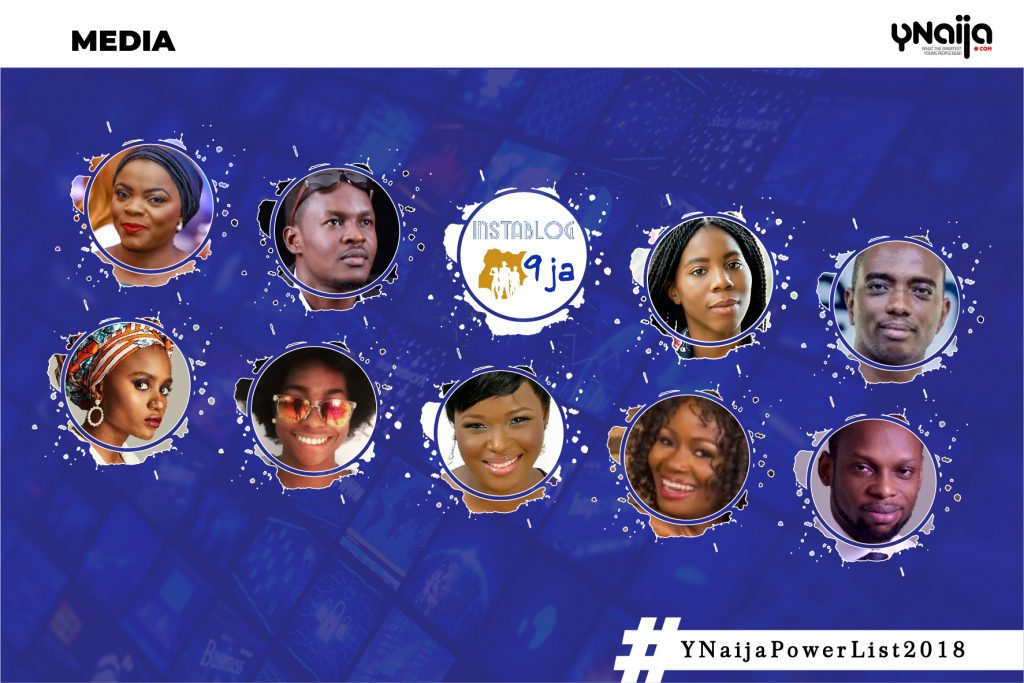 YNaija has released the 2018 edition of the #YNaijaPowerList for Media – “a roll call of the most powerful Nigerian influencers under the age of 40,” the platform says.

See full profile of the #YNaijaPowerlist2018 below:

Mercy Abang is a journalist, publisher, environmental consultant and social media maven. She has worked as media assistant to former Cross River governor, reported from the United Nations as the 2017 United Nations (Dag Hammarksjold) Journalism Fellow and played fixer roles for teams from the BBC and Al Jazeera. Abang runs the news site, NewsWireNGR, an online newspaper set up in 2013 to document the stories of underserved populations across media outlets around the world.

A former broadcast journalist and advertising executive, Bada Akintunde-Johnson is the Country Manager for Viacom International Media Networks Africa, a behemoth that houses lifestyle brands such as MTV Base, BET, Nickelodeon and Comedy Central in the Nigerian Market. As the focus person for Viacom Africa’s Nigeria business, Akintunde-Johnson positions the brand’s visibility and helps create wider opportunities for local talent.

Love it or hate it, you go to Instablog9ja for your gossip and news and everything else in between. No other online platform pulls as much weight as Instablog. Period. The numbers don’t lie. Over 1.8 million followers on Instagram avidly consuming over 47,000 posts with each one getting engagement that even legacy media platforms dream about. For a snapshot of the cultural cachet that Instagram wields, look no further than the circus surrounding the handle’s real ownership. Instablog9ja doesn’t just report gossip, it is the gossip.

Sonia Irabor was with Genevieve Magazine right from inception, as a precocious teen correspondent and columnist. In 2017, she took up the editor role, one which her publisher mum, Betty Irabor had quietly been preparing her for even while she was studying abroad. Genevieve Magazine has remained a market leader in the field of lifestyle glossies, seeing off countless competitors in its fifteen years of existence. Sonia Irabor hasn’t rocked the boat and has made attempts to increase the magazine’s online presence while attracting a younger generation of subscribers.

Matuluko is co-founder at Techpremier Media Ltd, publisher of Techpoint.ng, the leading tech website in the country. As executive editor of Techpoint, Matuluko leads a dynamic media outfit that covers the happenings in the tech and business spaces aggressively with comprehensive, award-grabbing reportage. The annual Techpoint Build is a buzzy conference and exhibition event that connects startup and SME communities with opportunities while Techpoint Inspired convenes essentially everyone in the tech value chain to explore emerging trends.

Since Chidera Muoka took over editing duties at Guardian Life, the trendy weekly pull-out has reclaimed its status as the magazine of record for generation Z. The Guardian newspapers has been working to shed some of the stuffiness that has characterised its presentation over the years. The decision to hire younger, edgier talent to realise this goal proved to be a smart one as Muoka – under the umbrella of the Ventra Media Group – has repositioned Guardian Life through buzzy cover stories, trendy profiles and attention-grabbing photo shoots.

For the generation of Nigerians who voraciously consume content via mobile, Damilola Odufuwa is something akin to a national treasure. She has led the newsrooms at Zikoko.com and Konbini where she oversaw a selection of bright young writers, video editors and producers to create unique, visual-focused content for young African millennials. Odufuwa moved to CNN in July, where she works as a producer running CNN Africa’s social division.

Ogunseye became the first-ever female editor in the Punch newspaper’s history when she was promoted to editor of the Sunday Punch. A multi-winner of the CNN/Multichoice African journalist prize, Ogunseye joined the BBC World Service in January in the role of head of language services for West Africa and manages the Hausa, Igbo, Pidgin & Yoruba channels. Ogunseye is a Mandela Washington Fellow and was the first Nigerian to win the prestigious Knight International Journalism award for her investigative reporting.

A reporter with The Nation Newspaper, Hannah Ojo’s dedication to digging up and reporting compelling stories is matched only by the quality of her output. Ojo’s work, straddling the areas of development, technology and social justice has earned her countless journalism prizes and fellowships. She has won prizes at the Nigeria Media Merits Awards and Zimeo Awards. Ojo has also been a recipient of media fellowships organised by BudgIT, News Corp, Thomson Reuters Foundation and the International Center for Journalists. Ojo reported from the 2018 UN General Assembly as a Reham Al-Farra Memorial Journalism Fellow.

While at TheCable newspaper, Soyombo proved his mettle as an eagle-eyed editor and excellent investigative journalist. And he’s got the international awards and renown to show for some of his efforts. When he joined the International Centre for Investigative reporting (ICIR), an independent, non-profit news agency that had funded his impactful Forgotten Soldiers series, it made perfect sense. This year, Soyombo joined Sahara Reporters and has published investigations on the health system and police corruption at state borders.