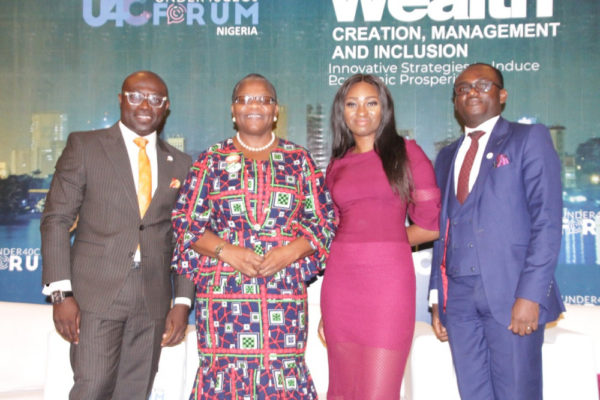 The third edition of the Under 40 CEOs Forum, which held in Lagos Thursday, had accomplished professionals and emerging business leaders share perspective on the theme “Wealth Creation, Management and Inclusion – Innovative Strategies To Induce Economic Prosperity.” Oby Ezekwesili, former World Bank Vice President, Africa Region, who was among the speakers, noted that investment in human capital, not oil, will drive Nigeria’s economic growth.

An erstwhile Minister of Education, and 2019 presidential candidate of the Allied Congress Party of Nigeria (ACPN), Ezekwesili harped-on the urgent need for human capital development via investment in education, which she described as the new oil. She said local productivity and competitiveness have to improve if the economy must grow, and that this only achievable through human capital development.

She noted: “As a country blessed with enormous human and natural resources, it is regrettable that we have wasted five cycles of the oil boom, according to available data. We really need to disrupt the pattern we have followed because our prosperity would have come by now if it were to come from oil. So the best thing to do is to say let us find a new trajectory.”

“With too much dependence on oil, our economy is so volatile that we basically have a situation where the country’s fortune goes up and drops. Such volatility is not good for economic growth; it has definitely not helped us. That is why, for me, education is the new oil and human capital development is the way forward. Because by investing in human capital we raise income, and when we raise the income capacity of people we raise them out of poverty.”

Ezekwesili stressed that prosperity is tied to how well an economy is run, noting that the Chinese had the same problems and were deep into poverty until a certain leader came up and stopped it. She charged the Under 40 CEOs Forum not to accept the status quo but to rise up to the challenge of redirecting the economy by creating more opportunities for mentorship of aspiring entrepreneurs so that, together, we can move the nation in the right direction.

“You must all join in rebuilding the economy, and not sit down hoping that friends will get government appointments and open doors for you. No! Everybody has to be involved. The difference between China and India is that China spent so much on human development. That is what brought about the economic wonder that China is today. So, we’re going to have to develop our human capacity to make significant progress,” she said.

The Under 40 CEOs Forum, an extension of the Under 40 CEOs television show, is a live interactive event, which offers a unique opportunity for current and aspiring CEOs to meet, share ideas and collaborate to create economic value across the continent. The highlight of the forum was the launch of the book “Under 40 CEOs – How We Made in Africa, volume 1” featuring authentic stories of 52 of the brightest young African business leaders from Nigeria, Ghana and South Africa.

In his remark, Executive Director, Africa, Under 40 CEOs, Familusi Akin Babajide (FAB), noted that the book launch is in furtherance of the objectives of the Under 40 CEOs, which is to create value for the younger generation of entrepreneurs and business leaders through learning and mentorship. He noted that the Under 40 CEOs Network currently has 874 members and that 91 have so far featured on the television show. Membership is currently drawn from Nigeria, Ghana and South Africa with plans to expand into other African countries.

Under 40 CEOs launched on TVC Entertainment and TVC News on October 9th, 2015 and subsequently launched on Silverbird Television Network on January 13th, 2017 and has spotlighted inspiring young business leaders aged 40 and under from Nigeria, Ghana and South Africa.

With over 87 episodes till date, and serial entrepreneur, Familusi Akin Babajide (Mr FAB), as the host, Under 40 CEOs has since gone on to inspire and motivate millions of would-be young business leaders across Africa to take action and join in the rebuilding and re-shaping of the African continent.