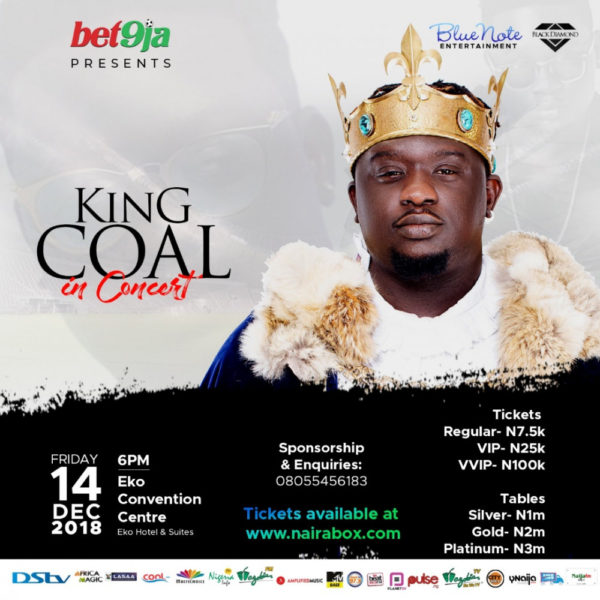 Nigeria’s talented vocalist and CEO of Black Diamond, Wande Coal, has announced his first headline concert in Lagos this Christmas. The concert tagged ‘King Coal in Concert’ is sponsored by Bet9ja, the Nigeria-based sports-betting company and it will feature the legendary artist performing hit songs such as Ololufe, The kick, Baby Hello, Ashimapeyin, Turkey Nla and So Mi So on a night of musical bliss.

‘King Coal in Concert’ is scheduled to hold on Friday, December 14th, 2018 at the Eko Convention Center, Eko Hotels and Suites Lagos and tickets are available on nairabox.com.

The concert will be Wande’s first solo show in Nigeria and it is set to feature seasoned and recognizable musicians in the industry some of whom have collaborations with Wande Coal.

Since the release of his debut album Mushin to Mo’Hits in 2009, Wande Coal has continued to thrill fans locally and internationally with mind-blowing performances, collaborations and songs earning him multiple awards such as the Headies, MTV’s MAMAs awards, the NEA awards and the Ghana music awards.

Speaking on the concert, Seyi Sodimu, a member of the Board of Directors, BlueNote Entertainment- organizers of the event said, “We are happy to bring Nigerians one of the most talented musicians the country has ever seen. We are putting together a wonderful event and Wande Coal is ready to thrill his fans. We are sure Nigerians will be entertained beyond their imaginations.”

According to the Senior Marketing Manager of Bet9ja, Olufemi Osobajo said. “We decided to move ahead with this sponsorship this Christmas, in recognition of the need to entertain our teeming customers who have been with us all through the year. At Bet9ja we are committed to the entertainment of our customers, whether they are watching sports or listening to music and we believe Wande Coal has been a major proponent for good music in Nigeria – as he embodies what good music sounds like.”

Over the years, Wande Coal’s style of music has been deeply rooted in telling stories; from love to life, relationships and his career journey – allowing him to connect with fans on a different level worldwide. Wande Coal’s voice has become a major part of his identity and his ability to render any song in any genre proves his vocal versatility.