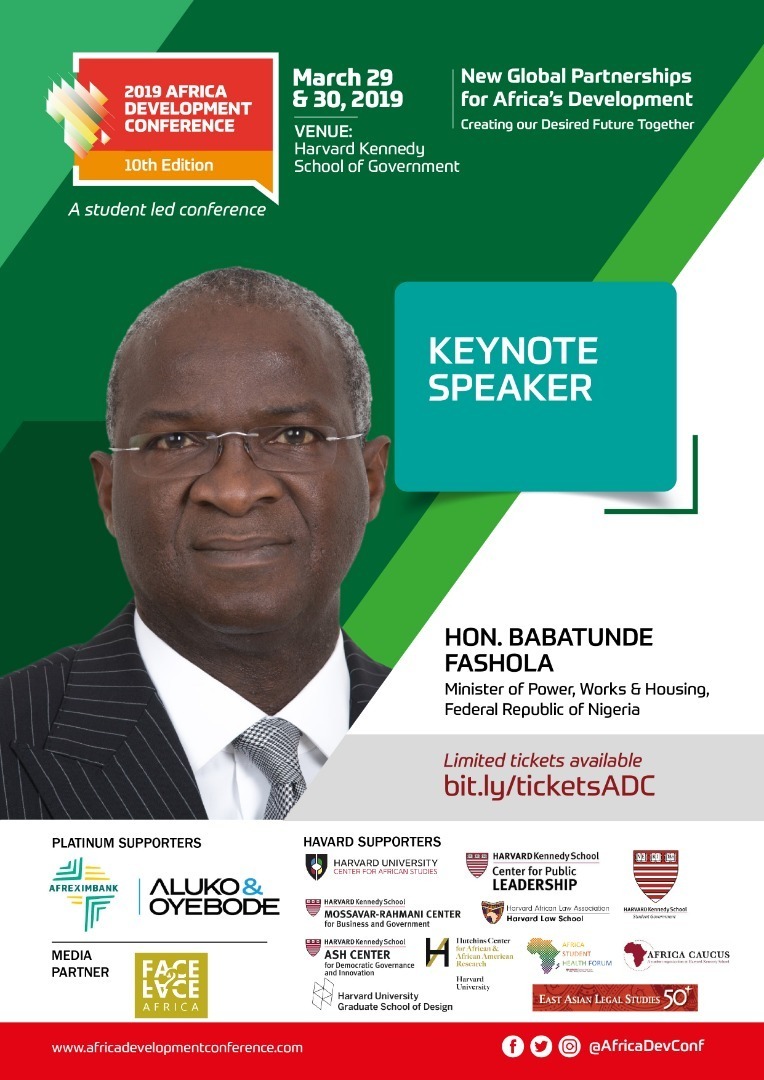 Nigeria’s Minister of Power, Works and Housing, Babatunde Fashola is part of a stellar cast of speakers headlined by the President of Ghana, Nana Akufo Addo who will speak at the 10th Africa Development Conference, a student-run event at Harvard University, scheduled for March 29th –  30th, 2019.

The 2019 edition of the conference will also feature Dr. Albert Zeufack, the Chief Economist of the World Bank in Africa and African-American corporate rock-star, Bozoma St. John, who has been named as one of the most influential black women on the planet for the last five years.

The Ghanaian President, a champion of African prosperity and African solutions to the continent’s problems will address the conference as the Special Guest of Honor on Friday while Hon. Babatunde Fashola will address the conference on Saturday as the Keynote Speaker. The 2019 Africa Development Conference is themed: “New Partnership for Africa’s Development: Creating our Desired Future Together”.

“We want to look at all the moving parts in the march towards Africa’s development, especially from the continent’s international partners”, says Thebe Tsatsimpe, the President of the African Caucus at the Harvard Kennedy School. “We are aware of what China is doing on the continent, the European Union’s new engagement policy of investing €100 billion in direct investments, the United States’ Build Act as a counterpoise to China and what other actors like India and Japan are pursuing on the continent,” said Tsatsimpe. 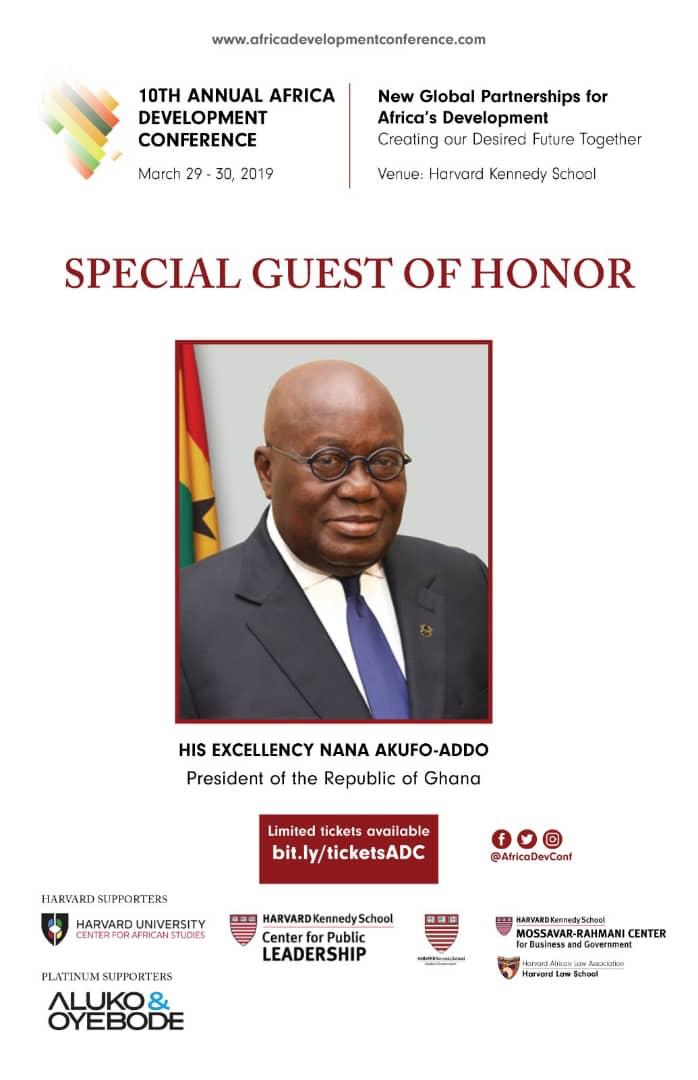 “Meanwhile the Africa Continental Free Trade Area which is expected to create a market of two trillion dollars ($2 trillion) when fully operationalized is also moving full steam ahead.  “How do we as African professionals and students in America and the world know about these opportunities and how do we plug in? This is what the conference will discuss.” Tsatsimpe told journalists in Cambridge, Massachusetts. The 2019 Africa Development Conference will constitute ten (10) panels, four (4) keynote sessions and more than fifty (50) speakers, drawn from various disciplines including health, finance, economy, legal, social enterprise, and planning among others. At least 400 Africans and Africa-enthusiasts are scheduled to attend the event this year. A Harvard tour, an Open-Mic networking cocktail, and an African Ball christened the ‘Taste of Africa”, where the culinary delights on the continent will be explored, are parts of the experience curated into the conference.

Africa’s leading Trade Finance institution, Afreximbank and top-notch Nigerian law firm, Aluko & Oyebode are headlining the Platinum Support of the conference. Several Harvard University institutions and centers including the Center for Public Leadership, Center for African Studies, the Mossavar-Rahmani Center for Business and Government, the Kennedy School Student Government are among the impressive list of supporters for the event. Other centers like the East Asia Legal Studies, the Harvard Africa Law Association, the Africa Health Forum, the Graduate School of Design and the Hutchins Center for African and African-American Research are also supporting the conference.

For more information, and to learn about ways you can get involved, visit: www.africadevelopmentconference.com 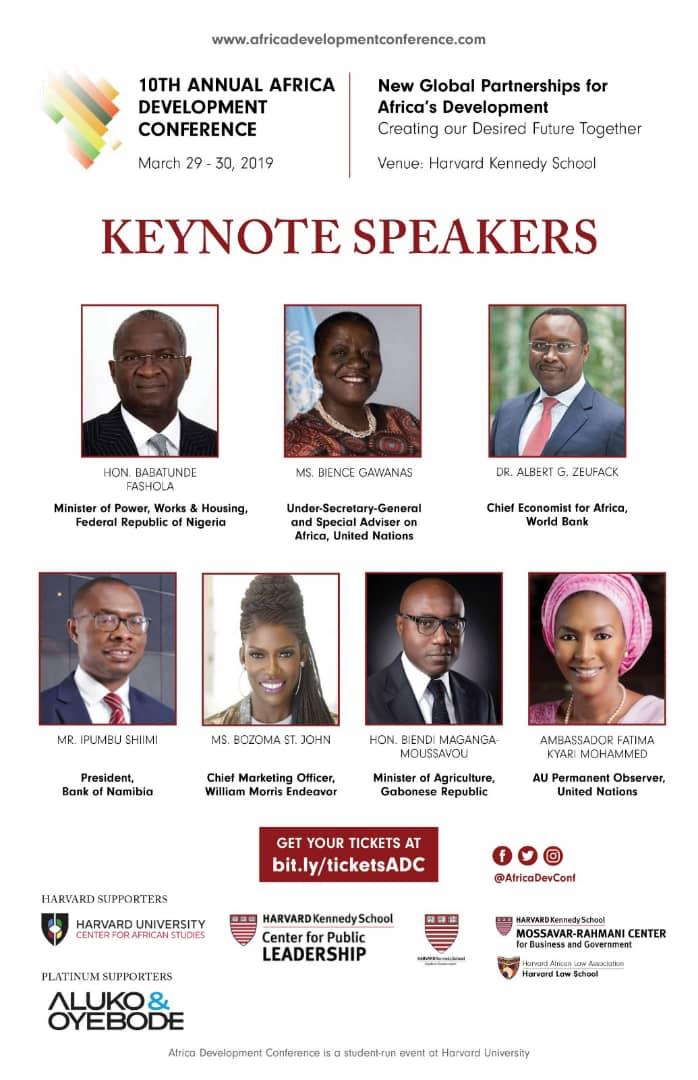