Queen Moremi The Musical: The Revolutionary Play about Women Leadership is Back | April 18th- May 5th 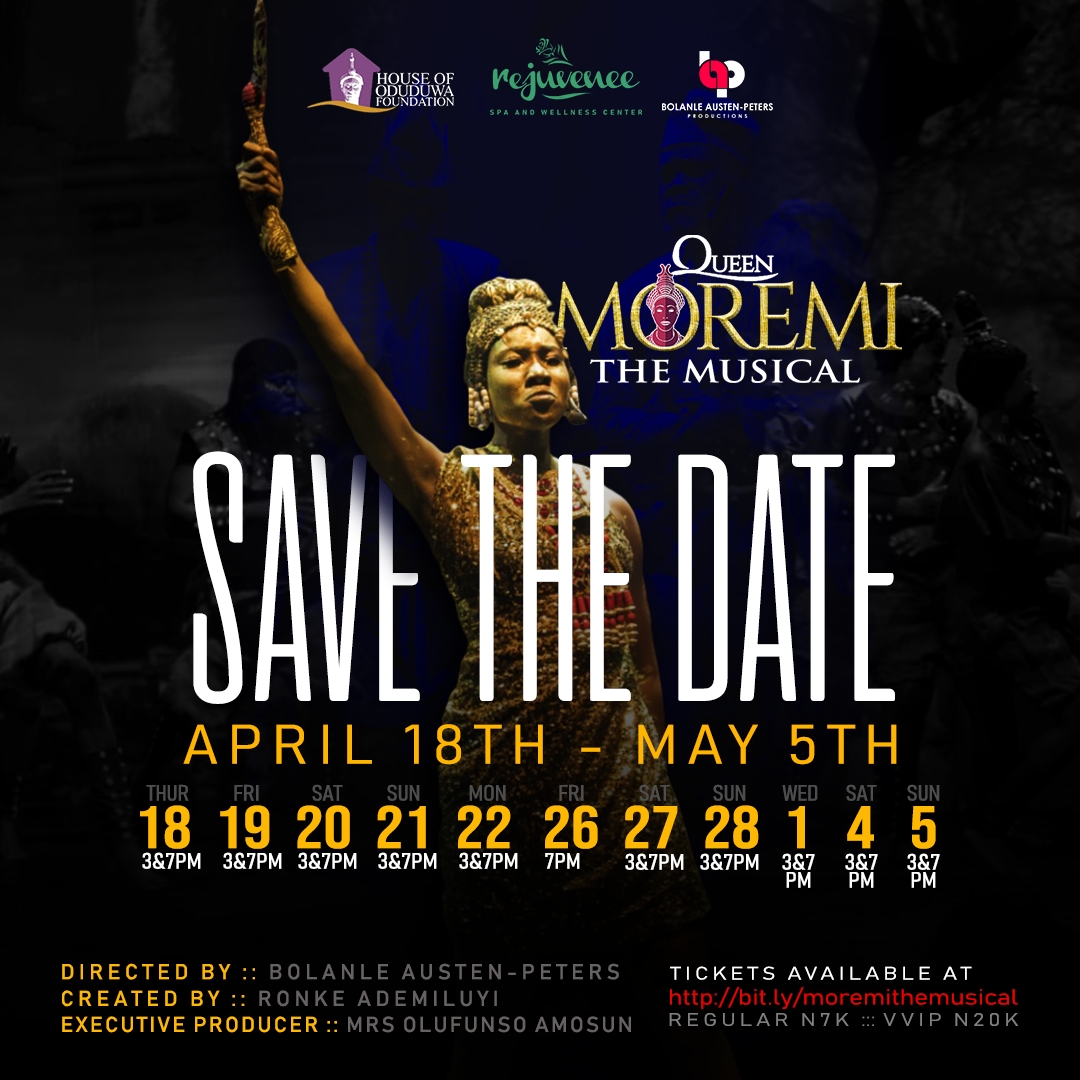 Fresh off from their major sell out of their “December to Remember” show, the executive producers Princess Ronke Ademiluyi & Chief H.E Olufunsho Amosun and the director Bolanle Austen-Peters is set to have a massive shutdown show this Easter. We weren’t told before the last season in December that it would be a total shutdown but Moremi the Musical Day 1’s can testify to the electrifying show moment they all experienced at the Terra Kulture hall.

Now, we know what you are thinking, should you expect double the action come April 18th?

Yes, the major sponsors House of Oduduwa & Rejuvenne hints that you should brace yourselves for the full blast action the cast is going to unleash on stage. More interestingly, they are bringing more exposure to the Queen Moremi Ajasoro story.

We have all been seeing a new buzzword around about “Easter Just Got Fully Booked” and we’re giddy with anticipation. Obviously, this is good news, as we have the great opportunity to witness the best selling stage show make a comeback this Easter. With this major return, we are left with no worries about what to do for the holidays, as Easter Just Got Fully Booked with 21 Raving Shows.

Queen Moremi the Musical, is a revolutionary show as the musical has surpassed just being a form of entertainment but a key awareness to the present conversation about feminism and women leadership. In a recent press release with The Nation News Agency, the Ooni of Ife spoke on the upcoming show he went ahead to say that he would be the first to campaign for a female president so long as such woman is detribalized and generally acceptable by Nigerians. “If I don’t believe in female leadership I will not have championed Moremi The Musical” – he added.

We all know that one of the most talked about glamour of the show was the delightful costumes, the cast stunned the audience in their uniquely colorful costumes, we would be remiss if we didn’t mention that this season, the Head costumier Terra Kulture tells us to expect a banging twist in the costumes.

Now that we know that you are fully anticipating what is to come from April 18th -May 5th, you can now get your tickets here

Remember just like the last season,  waiting to get your tickets at the venue might be disappointing because tickets might sell out before then, as everyone is anticipating the exciting entertainment live on stage.