Trick question: What does a Michelin Star chef from Thailand, A Chef Patron of an award-winning restaurant, and an award-wining OAP, turned seasoning whisper have in common? They love food and are Masterclass facilitators coming to the GTBank Food and Drink Festival!

These facilitators are part of a line-up of diverse culinary experts who will headline Masterclasses that explore all facets of the global food and drink industry. In ten days and a few hours, the long-awaited food and drink festival will kick-off, but until then, more facilitators will be announced as we count down in style. 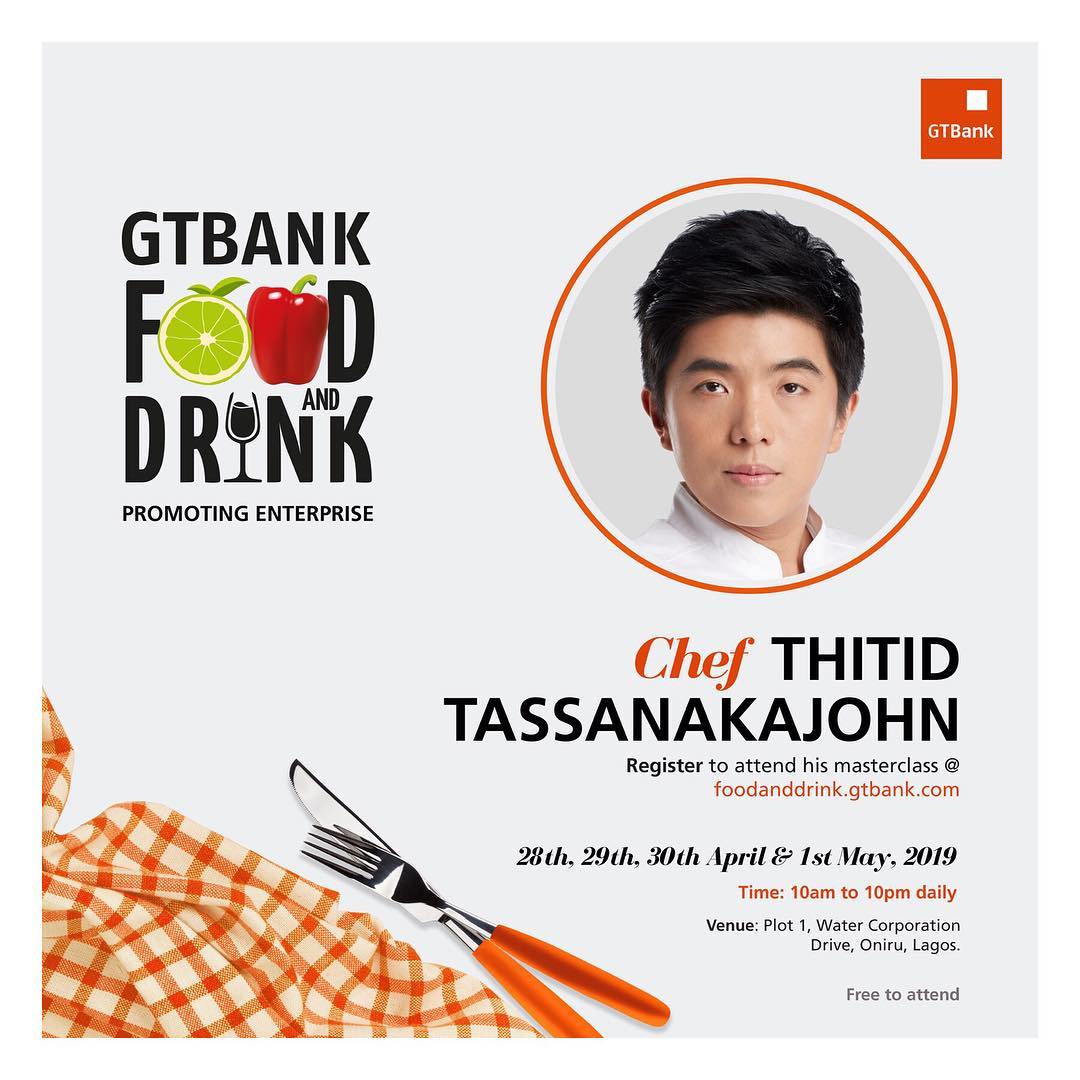 Thitid Tassanakajohn, also known as Chef Ton, is the rising star of Thailand’s culinary scene and runs one of the most exciting kitchens out of Bangkok. His restaurant, Le Du, is ranked seventh in Thailand Tatler’s Top 10 Best Restaurants and 37th in the annual Asia’s 50 Best Restaurants list.

Chef Ton’s professional career as a chef started when he left Thailand to the United States of America (USA) to pursue his passion for cooking at the prestigious Culinary Institute of America. Right after graduation, he worked in several Michelin-starred restaurants in New York City, including Eleven Madison Park, The Modern, and Jean Georges, before going on to open his restaurants, BAAN, and Le Du in Thailand.

Chef Ton is also a wine connoisseur and a Certified Sommelier (CS) from the renowned Court of Master Sommelier, which was established to encourage quality standards for beverage service in hotels and restaurants.

Chef Ton will be at the GTBank Food and Drink Festival on Wednesday, May 1st, 2019, to demonstrate Reinventing traditional recipes. 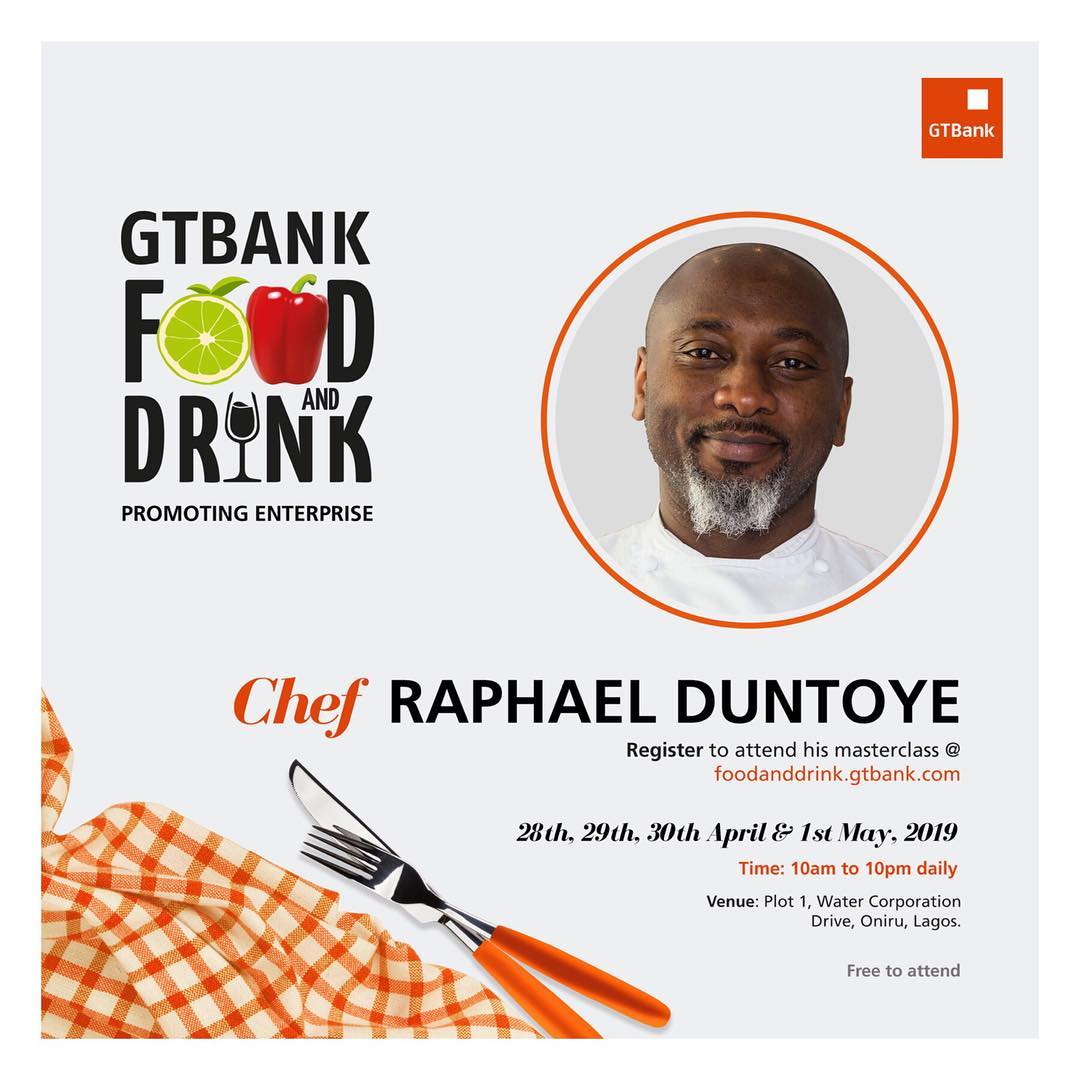 Renowned for his lightness of touch and reverence for the best fresh produce, Chef Raphael began his culinary journey in 1995 when he left a career in engineering to follow a life-long passion for food and cooking that would lead him to become Chef Patron of an award-winning restaurant at La Petite Maison.

Chef Raphael joined the Butlers Wharf Chef School in 1995 and following his graduation, spent the next five years earning his culinary stripes under the mentorship of Pierre Koffman, one of the United Kingdom’s most celebrated Chefs of all time. Raphael credits Koffmann, with teaching him how to “really cook”. He later served as Executive Sous Chef at Sketch in Mayfair and as a Senior Sous Chef at the Japanese restaurant Zuma in Knightsbridge, London.

In 2007, Chef Raphael opened the first La Petit Maison in Mayfair, London and has since then expanded the award-winning restaurant to 5 other major metropolitan cities across the world.

Chef Raphael will be at the GTBank Food and Drink Festival on Wednesday, May 1st, 2019, to demonstrate how to Achieve the Ultimate Sophistication Through Simplicity. 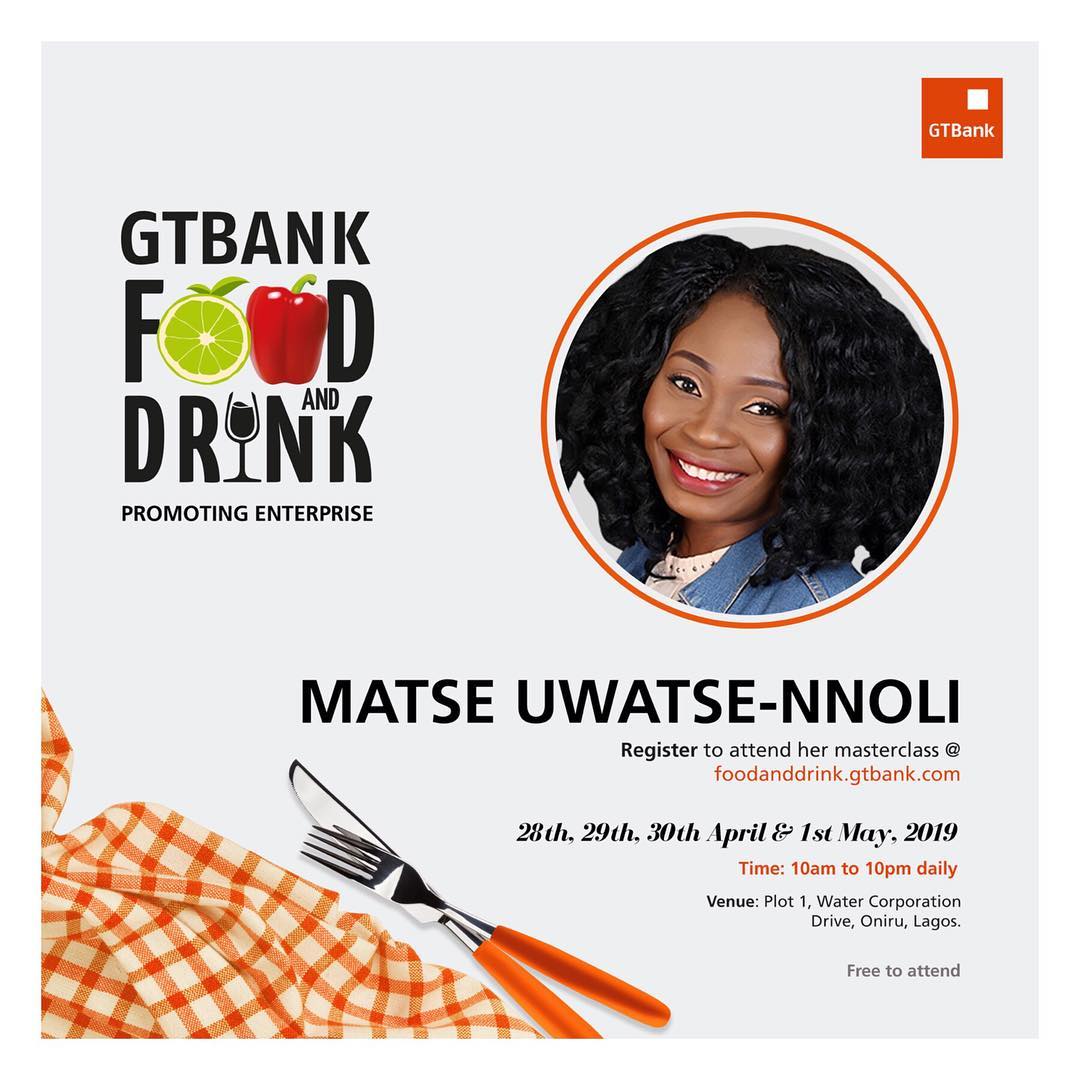 Matse Uwatse-Nnoli is an award-winning radio presenter and prolific food blogger renowned for her innovative African spices and stunning food photography, which she regularly shares with thousands of her followers.

Matse began her career as a radio presenter and made a name for herself as an On-Air Personality with Wazobia (OAP) and Nigeria Info Fm. After her stint as a radio presenter, Matse returned to her first love–cooking, and created MatseCooks Limited in 2014 to educate and start conversations around food and drinks from all around the continent.

The positive reception of her food blog led Matse to launch her own spice range, MatseCooks Seasonings, which is stocked across Nigeria and several countries. In 2016, Matse was named Ynaija and Leading Ladies Africa’s top 100 most inspiring women in Nigeria.  She is currently working on her first Cookbook.

Matse will be at the GTBank Food and Drink Festival on Monday, April 29th, 2019 to share with her audience, The Secrets to Blending Seasoning to Perfection.