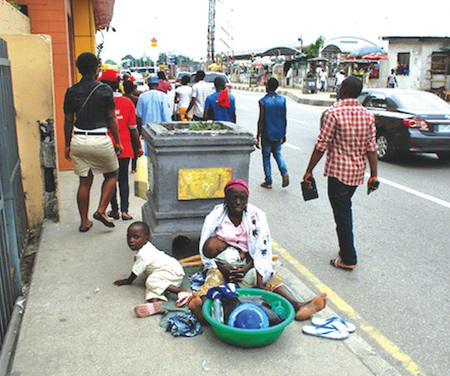 It’s crazy just how much goes on under our noses, all of us unaware of it. We see these child beggars everywhere, on major roads and on our streets, but their real lives are alien to us.

In a piece for the BBC, writer Adaobi Tricia Nwaubani shared the story of one of such beggars, Samuel Abdulraheem, who was abducted in Kano at the age of seven and hired out to blind beggars weekly or monthly as a guide around the dusty streets that make up the outskirts of Lagos.

Samuel, sharing his story, said those years remain a blur to him, and maybe he was given something that made that so. He didn’t think of his family while in captivity, he said. He shacked up with a one-armed woman who rented him out, he said, and slept on a mat. When he was rented out, though, like a piece of furniture, he slept on the streets with whatever blind beggar was his current master.

I am not sure I had emotions then. Just a zombie that knew he had to wake up and lead a beggar out. Make money, eat food and sleep, and the same routine the next day.

Samuel wasn’t found until five years later. His sister, Firdaus, had visited Shiloh where she applied for a stand to sell some tie-dye fabrics her mother had made. There, she saw her brother leading a blind beggar. She screamed.

Firdaus’s scream attracted a crowd, including church officials. Shocked and unable to properly articulate her joy, she managed to explain that the gaunt boy with bent shoulders is her long lost brother. They termed her finding her brother a “miracle,” and the officials bathed the boy, dressed him up, and the pair climb the altar to give a testimony.

Samuel is thirty now, and works as a supervisor on construction sites. He generally holds no grudges, and sees everything that happens to him as a part of life. And, because of his experience, he refuses to give beggars money. Instead, he prefers to buy them food.

I’d rather buy them food. Because, back then, it was better giving me food than money because the money went to the beggar and none came to me.

Read the full story on BBC.