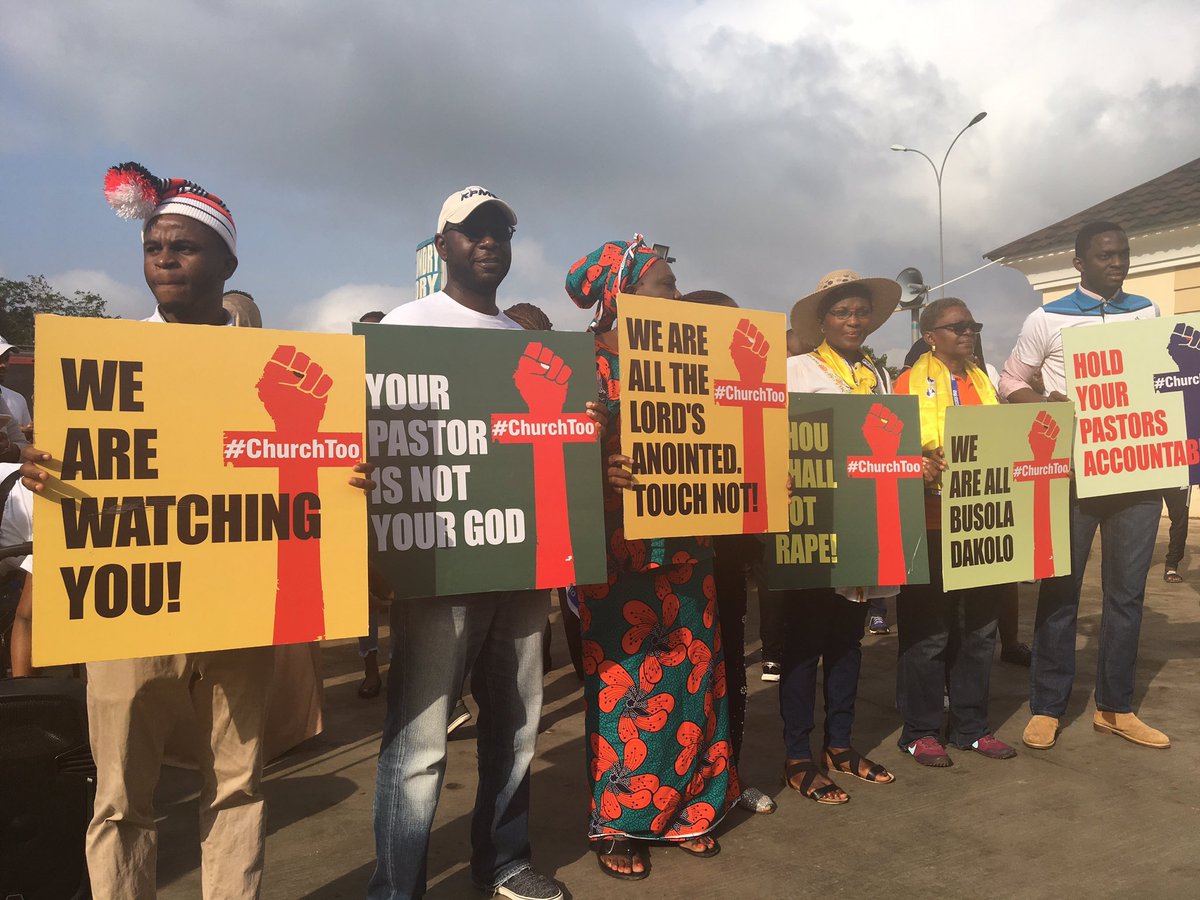 Instigated by the rape allegations made against Pastor Biodun Fatoyinbo of Commonwealth of Zion Assembly (COZA) by Busola Dakolo, Nigerians are protesting sexual abuse in the church.

Social media, this Sunday morning, is filled with photos of folks in white carrying placards proclaiming #ChurchToo – a play on the #MeToo hashtag.

The protest, which is said to be a silent one, has protesters with black tapes making Xs over their mouths, carrying placards saying “Your pastor is not your God,” “We are all the Lord’s anointed. Touch not,” “Thou shall not rape,” and “We are all Busola Dakolo.”

The protest is ongoing in both Abuja and Lagos, with the meeting point in Abuja at NNPC Filling Station, Guzape, and in Lagos at Hubmart in Isaac John.

The protest is supposed to reach the premises of COZA, but protesters report the roads leading to the church have been blocked with buses and cars, so protesters cannot pass.

See photos from the protest.

The Protest is On at COZA church Abuja. Nig. ❤️❤️❤️

For those that couldn't make it, kindly RT to support the justification movement! ✊?#ChurchToo#PastorStepDown#IStandWithTheTruth #IStandWithBusolaDakolo pic.twitter.com/TfNJsUP1IX

I see alot of you attended the protest behind your phones…#ChurchToo pic.twitter.com/NE6Ew86Myw

Yess! Our voice matters, rape is a sin and a crime #PastorStepDown #IStandWithTheTruth #ChurchToo pic.twitter.com/uETBlwGRAm

We refuse to be provoked! We’re here with a clear message and we’ll send that message peacefully. #ChurchToo #MeToo #SayNoToRape #IStandWithBusolaDakolo #ThouShallNotRape#CrimeNotJustSin pic.twitter.com/LXBJsUdp31

COZA has hired thugs to intimidate people at the march. We are on alert and #ChurchToo insists on a peaceful protest this morning. We are seated in front of the church. pic.twitter.com/YWcbZEKmUT