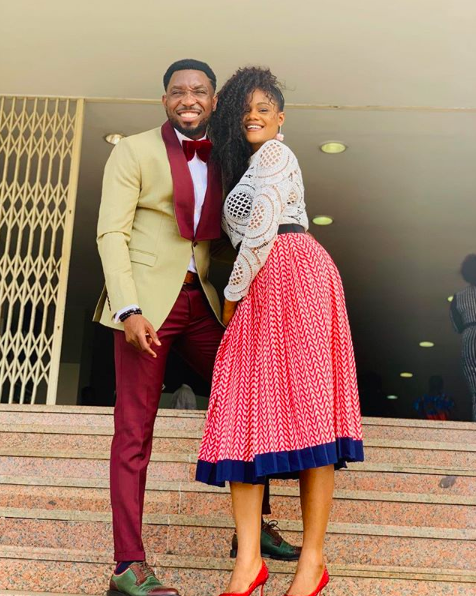 On Sunday, singer Timi Dakolo and his wife Busola Dakolo had a press conference where the singer narrated the events that have followed since the release of the interview where Busola accused Pastor Biodun Fatoyinbo of COZA of raping her twice when she was 16.

Timi released a public statement thereafter. See the highlights below:

Timi also responded to questions, debunking rumours that he said he married his wife as virgin, adding that he had to share a video from his wedding after rumours saying he got married at COZA.

Timi Dakolo answering questions to clear some rumours that had been going about his supposed relationships or activities with COZA church.#ChurchToo #StandtoEndRape pic.twitter.com/UbKVmKeV7t

See the full press statement below:

PUBLIC STATEMENT ON POLICE OPPRESSION AND VICTIMIZATION: OUR COMMITMENT TO TRUTH AND JUSTICE

Gentlemen of the Press –

My wife and I have called this press conference because, as a man, I have done what I am supposed to do – I stood by my wife when she decided to go public with her truth. It was not an easy decision but I was raised by my Grandmother – I saw that woman go to heaven and back for me – she used to trek kilometres to go to church to pray for me and sold everything to make sure we ate. From loving my Grandmother, I have a deep respect for women; I took the decision boldly as a man should. I stood for her when she came under attacks from the ill-intentioned members of society. I have fought for her even when I have been abused, lied against and accused of unspeakable things.

As a Father however, I could not have foreseen the events of yesterday when an attempt was made to abduct myself and my wife – FOR TELLING HER TRUTH.

All we have asked is for this matter to be duly investigated. I did not expect that our residential address – where our children live – will be released to the public AND SINCE THEN, I have noted with increasing alarm, how my life, my wife’s life and the lives of our children have been put at risk by unscrupulous persons. We have been followed, our home has been watched, people have been standing in corners pointing fingers at our home – we have been unable to do any work; the children have had to be explained to several times why they cannot go outside and play.

As a Father and as the protector of my home under God, I have decided to come out and speak publicly against the harassment, bullying and maliciousness we have received as law abiding citizens of Nigeria – BECAUSE my wife decided to tell her truth and I decided that I trust her, I believe her and stand by her. I will never leave her side now and I will do my best to protect her. However, the good people of Nigeria, who have shown us so much love, deserve to know what has been happening.

On behalf of my family, I would like to share a few highlights, especially about the attempted abduction of yesterday, Saturday, July 20th, 2019:

a. We have since been to the Police Station in Lagos several times on invite by the Police to respond to various questions in the course of their investigations. WE WERE THEREFORE SHOCKED TO BE INVITED TO ABUJA – WHEN NO VISIBLE ACTION HAD BEEN TAKEN TO INTERVIEW MR. FATOYINBO.

b. On Thursday, July 4th, Y!TV published another video with a former employee of COZA alleging that Pastor Biodun also raped her. My wife broke down crying as she listened to her interview “There are other women – this recent?!” she kept saying as she cried. What surprised us was how Modele Fatoyinbo, who asked my wife to come and help her look after their newborn child – which is what led to the second rape – is the same person that asked this lady to come and look after her children – again? 15 years after?! It is strange. We do not know this lady, we have still not met her, but we would like to thank her for lending her voice to this truth.

c. As far as we know, Mr Fatoyinbo has not been questioned on the strength of my wife’s petition – even after several invitations by the Police that we have honoured. However, we have been invited to go to Abuja to respond to queries on actions that are not crimes known under any Nigerian law – “mischief” and “falsehood” are not crimes; we were not given details of the supposed case, THERE WAS NO ADDRESS FOR THE POLICE INTERVIEW and NO RESPONSE HAS BEEN GIVEN TO US ON OUR OWN PETITION THAT HAS BEEN FILED ALMOST A MONTH AGO.

d. On Wednesday, July 10th, our address was shared online  by Kemi Olunloyo in the most careless, reckless and wicked manner. To think she is supposed to be a woman and a mother and had no regard for the safe keep of our children and she has infringed on our Fundamental Human Rights to Personal Dignity and Privacy and is risking the lives of my 3 little children! This was callous! I decided not to engage with her, but I want Nigerians, the Armed Forces, Amnesty International and the good men and women of the Nigeria Police Force to know that SINCE THEN people have been following myself and wife in tinted unmarked cars, TO OUR HOME! AT different times, in the last week we have been trailed. The last event is what happened again yesterday and this time an attempt was made to abduct my wife and I. I had to park our cars and stay indoors. My wife and I have been unable to work and my children have been unable to go out freely even in this holiday period.

a. The letters the Policemen said they had when they heard us speaking to the lawyer were then presented. We noted that the letters are dated Thursday, July 18th. Why were they being delivered on a Saturday afternoon by a bus full of armed policemen and a car trailing my wife into the estate? Why did they not deliver the letter and leave when neither myself nor my wife were present? And why did they only step back when they became aware that lawyers were involved? These questions have been on my mind. I do not have answers for them.

b. The letters made no reference to any case or matter and it states that we are being investigated for a case of falsehood and mischief – two offences that are not known in law.

c. In the police’s press release yesterday, they claim a Police Invitation Letter is “… a polite investigative tool used in eliciting information voluntarily from parties to aid in police investigation.” If they were just delivering a letter, the manner in which they intentionally tried to instill fear, intimidate us with guns and insist on our coming to their bus – was neither polite nor trustworthy.

d. How is the Nigeria Police pursuing justice when Pastor Biodun Fatoyinbo, who is the accused in my wife’s matter, is not being treated in this manner but the authorities I expect to pursue justice are attempting to intimidate myself and my wife?

e. My children were at home!!!! They could also have been in their mother’s car!!!

f. We have never threatened anyone on our lives. Rather, we are now the ones who feel threatened. That is why we have Falana & Falana Chambers representing us and they have reported this matter to the police.

g. We receive the information from our lawyers, Falana & Falana Chambers, this morning that both our petition and the petition of Mr Biodun Fatoyinbo will be moved to Lagos. We acknowledge the effort of the Nigeria Police to ensure that our confidence in their impartiality, professionalism & good sense in this case is not shaken.