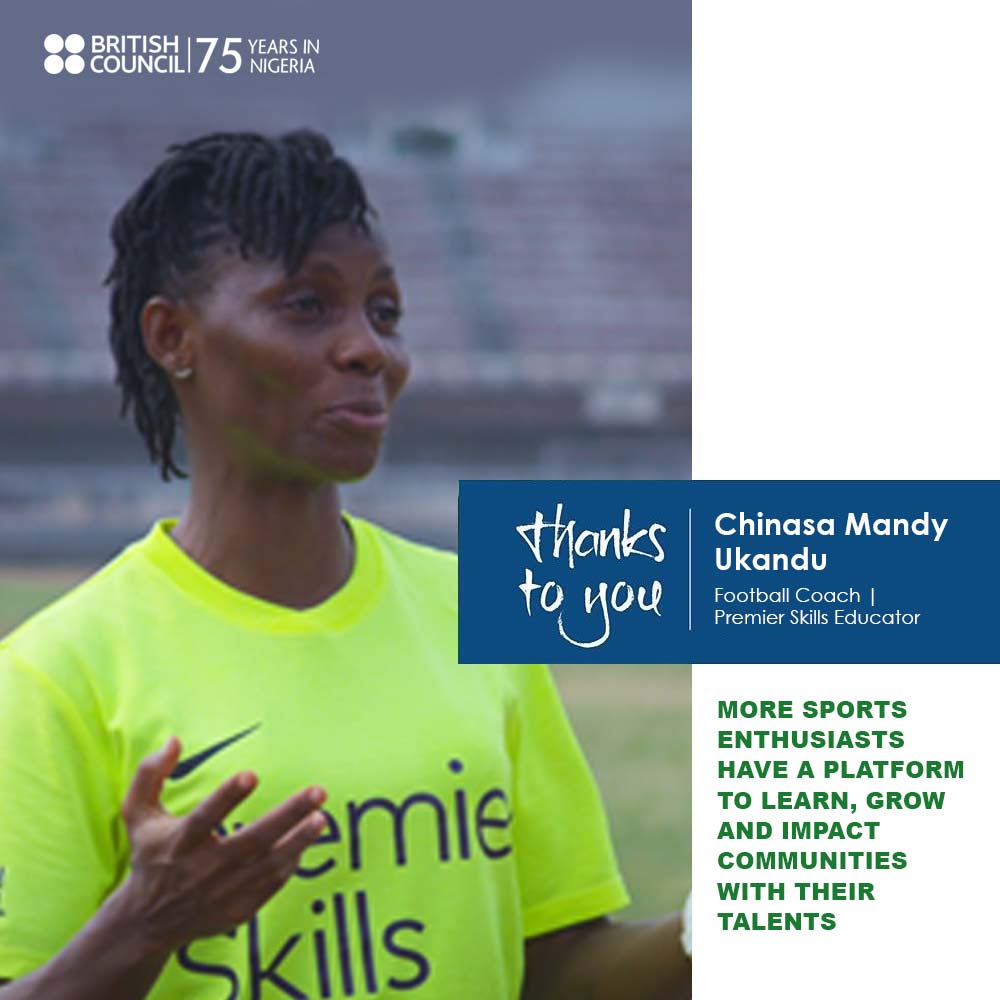 75 years!!! That’s 75 years of stories, of change, of lives transformed. Ever since the British Council launched in Nigeria, on June 9th, 1944, in the old Exhibition Hall in Marina, Lagos, we have stayed true to our mandate: to change the lives of Nigerians through a variety of programmes that would appeal to the public. And we have succeeded, helping to change the lives of millions of Nigerians in the 75 years of our operations.

We’ve partnered with Nigerians, across ethnic groups, socio-economic class, religion and in various sectors, one of such sectors being football and one of such persons being Chinasa Mandy Ukandu: a football coach, a Premier Skills coach educator who works with children that share her love and passion for football.

From childhood, Chinasa has had a passion for the game of football and decided to pursue her dream by playing for different clubs in Nigeria, including Sunshine Kings. As a young girl, she had to deal with the dismissal and surprise from family members who couldn’t understand why a girl would be interested in playing football. But she persevered, and got invited to play for the National Team: the Super Falcons.

After an injury that would have had anyone else discouraged but instead helped Chinasa focus on recovery, she came to the British Council and we trained her. We encouraged her to join the British Council’s Community Action Through Sports (CATS) Project where she saw how football can be used to make an impact in the lives of youths, and to join the Premier Skills Programme which has so far trained 800 coaches on the skills they need to make positive contributions and give back to their communities.

With both her work in the CATS Project and the Premier Skills Programme, Chinasa works both with kids and with adults and is a positive influence to the community and the world all around her. You can find out more about Chinasa and the work she does by watching the full video of our documentary, detailing her life’s work and journey below:

If you’ve also benefitted from a partnership with the British Council or know of anyone who has, you stand a chance to be featured in our events and win fantastic prizes.

Record your story in a video, upload it on Instagram or Facebook and tag us @ngbritish using the hashtags #thankstoyou #75stories #BePartOfTheStory or you can write your story and upload it HERE

Here’s to 75 more years of bringing positive changes to the country and to the world.