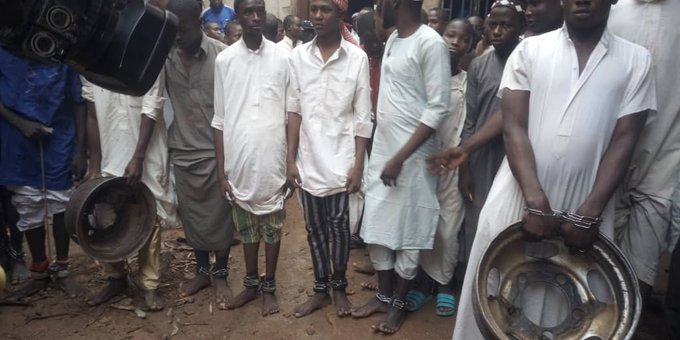 Some parents of the freed 300 male children allegedly chained, tortured and sexually abused at an Islamic school in Kaduna have kicked against the police for putting their children in protective custody.

The protesters, mostly women said the allegation by the police that the children were being sexually abused at the Islamic school was untrue.

The protesters who supported the operators of the school and their methods demanded the immediate release of their children by the police.

According to some of the mothers, there was nothing wrong with the Islamic school’s methods, and the police had no business raiding it.

The Kaduna State Command of the Police had on Thursday stormed Rigasa, Igabi Local Government Area of the state, to free 300 male children who were allegedly maltreated, sexually assaulted in the Islamic school.

The police said some of the victims were from Burkina Faso, Mali and other African countries, adding that the students alleged to have been abused.

According to Daily Trust, on Friday some mothers of the freed children protested against the police, saying they wanted their children reunited with them.

One of the women, Shafa’atu Zakari, said she has six children in the school who were drug addicts and were uncontrollable, which was why she took them to the school to acquire Qu’ranic knowledge. She said:

We brought the children to the school because we don’t know what to do with them. Presently, four of my children are among the children evacuated by the police. We demand for their release because the founder of the school is doing everything possible within Islamic teaching to rehabilitate them for us.

Related Topics:KadunaNigeria Police
Up Next