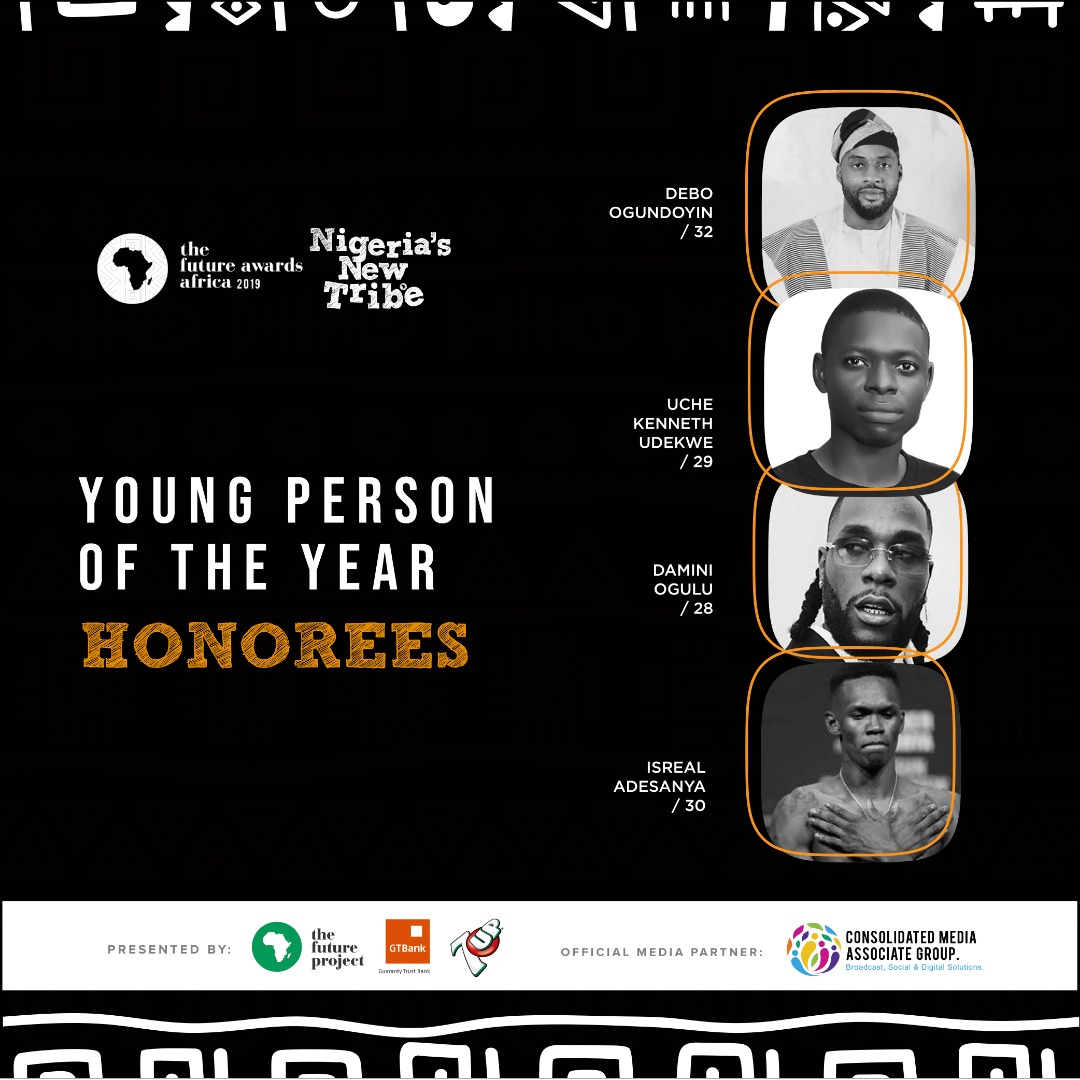 Celebrating their excellence and distinction regardless of barriers in tribe and religious differences, Damini ‘Burna Boy’ Ogulu, Debo Ogundoyin, Kenneth Udekwe, Israel Adesanya and the #NigeriaMeTooMovement pioneers: Khadijah Adamu, Damilola Marcus and Kiki Mordi, have been nominated for the ‘Young Person of the Year’ category of the country’s biggest youth awards, The Future Awards Africa (TFAA).

The Central Working Committee (CWC) describes the category as an exceptional award bestowed to any young person who has become a force for change, an individual who has demonstrated creativity, intuition, innovation, initiative and always ready to lead change in his/her industry.

The awards event, which will hold on 24 November, 2019, at the Balmoral Center, Victoria Island, celebrates young persons between the ages of 18 and 31 within the year under review, that has inspired and made a difference through innovation, social good, social enterprise, arts and culture, media, agriculture, and more.

See their profiles below:

Under the political party PDP, Debo Ogundoyin broke through the political glass ceiling to convince the Oyo state House of Assembly to nominate him as their house speaker, making him the youngest Speaker ever democratically elected into office. His nomination was unanimous, another first for the Oyo state House of Assembly. Ogundoyin who graduated from Babcock University epitomizes the change young people in Nigeria have been yearning for pertaining to the appropriate representation of youths in politics and hope that it can be achieved.

His ascension as speaker of the Oyo State House of Assembly, in tandem with Governor Seyi Makinde’s appointment ushers in a new political dispensation for Oyo state and especially his youth. Ogundoyin’s reign will usher in political reform, administrative restructuring and tangible proof that politics is evolving in Nigeria.

A multiple Future Awards nominee, Ogulu has captivated the nation with his signature sound ever since he released his debut single ‘Like To Party’, a sound that showed while he was influenced by contemporary pop music, he was also strongly influenced by his family’s history in shaping classic and contemporary Nigerian music, a legacy he was set to continue.

Burna Boy followed all this success with international collaborations and a proper album called African Giant. The album was featured on the Youtube Platform, feted by late night television in America and called divisive for its blatant call outs of whitewashing the West’s colonial history. Burna Boy is a true champion for the cause and a phenomenal artist; and his recent MTV EMA and BET Awards wins are all the validation he needs.

Healthcare is abysmal in Nigeria. The average Nigerian population is grossly underserved by a system that punishes doctors for choosing medicine and punishes patients for not being able to afford private care. In response to the abysmal state of healthcare in Nigeria, some Nigerians have committed their time, resources and expertise to understanding the pain of both parties and finding solutions that provide a sustainable solution. At the forefront of this innovation is Uche Kenneth Udekwe.

Adhering to and believing strongly in his notion that “No human life is too big to be saved and none is too small to be lost” Uche Kenneth Udekwe offers medical facilities that special in administering appropriate health care to pregnant women in rural regions across the country where otherwise is beset with inadequate medical resources. Using his talents as a polyglot to build trust with women across the country and guide them towards better healthcare.

Israel Adesanya is a Nigerian-New Zealander professional mixed martial artist, kickboxer, and boxer. As a mixed martial artist, he is currently signed to the Ultimate Fighting Championship (UFC), where he is the UFC Middleweight Champion. In kickboxing, he is the former Glory middleweight contender winner and King in the Ring, two-time cruiserweight and heavyweight champion, which is the most titles in King in the Ring history. As of October 7, 2019, he is #8 in the UFC pound-for-pound rankings. 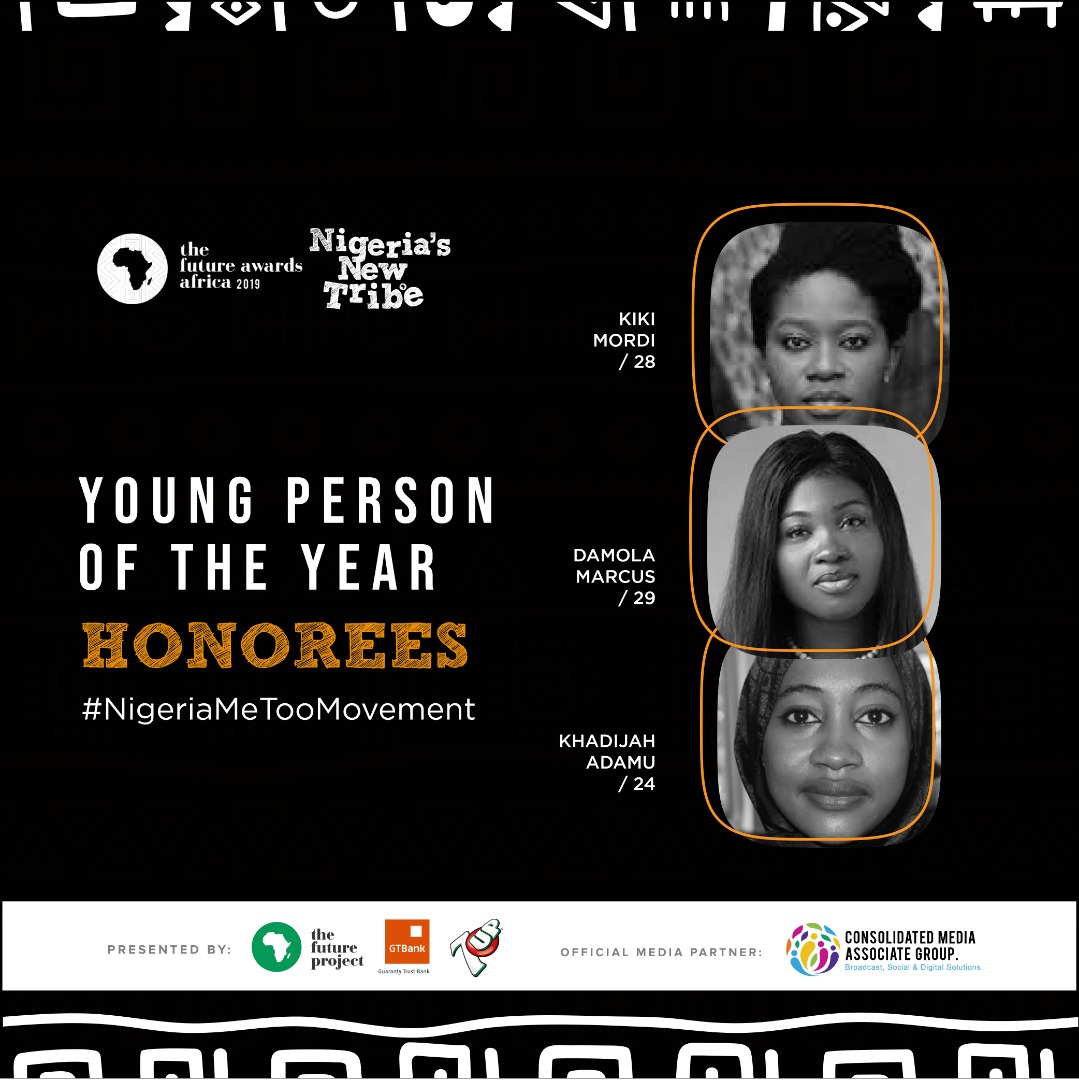 When the global #MeToo movement began in the US, it was started by a black female activist, Tanara Burke. The phrase expressed simply the unpleasant truth that sexual assault and violence was a commonality among women across the world.

But perhaps it was difficult to imagine a Nigerian version of the #MeToo movement, our culture of silence and our open support for patriarchal structures have gagged even the most fearless of victims. That culture of shame that turns against the victim and punishes them by ostracizing them. This is why The Future Awards Africa is recognizing the efforts of a group of defiant young women who stripped away our collective excuses for condoning rape culture and challenged institutionalized gender-based violence.

They have created safe spaces for people to boldly come forward to tell their story, thus encouraging them to heal.

Khadijah Adamu became the symbol of #ArewaMeToo movement in the north. It took her two years to name the man who abused her, and by doing so, she turned her back against an age-long entrenched system of silence and intimidation, which makes it almost impossible for victims to voice out. Khadijah’s story became the beacon of hope for other northern women who have been victims of sexual abuse in the past but never had the courage to voice out, it created a chain reaction that stimulated new conversations around sexual abuse in a usually closed northern society thereby encouraging those that came out to heal, at the same time creating safe spaces. Khadijah’s story led to the formation of the #ArewaMeToo movement which now has active chapters in Kano, Maiduguri, Niger, Sokoto, and Zamfara.

Kiki Mordi had a difficult story to tell and real consequences for telling it. Choosing sacrifice for the greater good, Mordi put her very life at the service of dismantling the institutionalized coercion of girls and women in forced sexual encounters in exchange for a passing grade had denied her and thousands of other young Nigerian women access to a university education. Mordi’s labour of love is #SexForGrades, an investigative documentary done in partnership with Charlie NorthCott of the BBC African Eye project. Her story got us talking about sexual violence and threat in the university, thereby compelling university authorities to seek extra measures to protect female students and regulate student/lecturers relationship.

The #MeToo movement extends beyond acts of violence and sexual assault, it also encompasses the subtler, more insidious ways in which rape culture delegitimizes the sovereignty of a person’s body, commodifying it for the consumption of others. Dismantling this idea is the motivation behind Damilola Marcus’ activism and the reason she started the #MarketMarch, a simple idea that sought to solve a persistent problem.