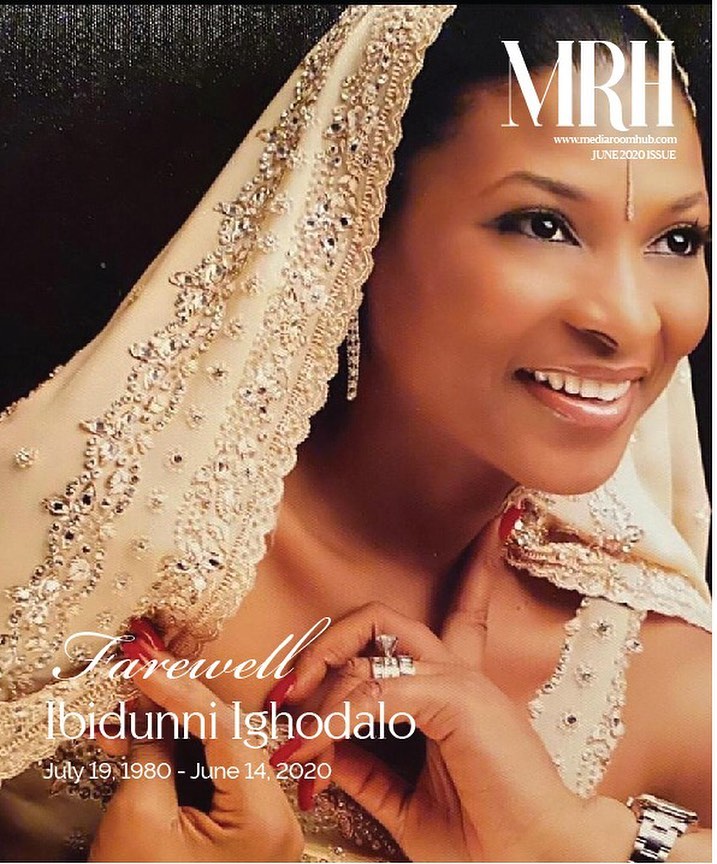 The news of her sad passing came as a shock to many, and her legacies will continue to live on. They live through whose lives she touched directly and those she inspired through her work ethics and by just being an angel on earth.

The quality of life she lived reflects on the thousands of eulogies pouring out on social media since June 14th, when she was announced dead. Ibidun is the reason why many homes have children and why many businesses thrive as well as why many people can even put food on their table.

In this issue, Media Room Hub points out her journey on event management, her foundation, IVF and her marriage.

Read excerpts from the magazine.

“First, I didn’t set out to marry a pastor,” she said amidst laughter. Recalling how she met Pastor Ituah Ighodalo, flawless-complexioned Ibidun opened up:

I was outside of an event venue and wanted to pick something inside the hall when I bumped into a man. ‘Oh, sorry,’ I said and went inside but something in my spirit told me that he was my husband! I didn’t believe the voice because that was the last thing on my mind. Later, we became friends, and I saw in him, a father and a confidant. P.I (she referred to him as that throughout the interview) fitted into my late father’s shoes and did (still does) all that my father did to me. I lost my father early but he adored me and I had a strong relationship with him. So, when I met P.I, I connected to him.

Did he know I contested in a beauty pageant? Yes, he did and understood what the Miss Lux pageant was all about—no indecent exposure. Before we got married, he asked me a lot of questions because it was important to him that I was spiritually fit and ripe for him.

Wondering what her mother thought of her daughter marrying a popular pastor, who was quite older than her? My mother had always told me that I was too mature for my age and would end up marrying an older guy. She was not surprised at my choice and seeing us living happily ever after is enough joy for her.

In an interview with Channels Television during her lifetime, she narrated how she waited for the fruit of the womb after her marriage to no avail.

But the fact that she was waiting did not deter her from supporting women that had similar challenge.

She said, “The foundation to support women waiting for the fruit of the womb was born out of pain. When I got married I expected to start having children. But nothing was happening. Two years went by and I began to get worried. My husband said to me that we have to wait on the Lord. He said what God would not do, let it not be done.. But as a woman I began to get worried and did all I could within medical limits but nothing happened.”

She said the period of her waiting was quite traumatic. “When you are waiting on God, things people do just get at you. When you see those who were your mates in marriage having children and talking about school runs of their children, it makes you also want to have your own children. Your husband is your friend, but somehow you feel that you also need the company of children.”

Her Ibidunni Ighodalo Foundation (IIF) with the slogan ‘Touching Lives and Fulfilling Dreams’.

Then, there was the Baby’s Day Out.

This is another novelty that brought to manifestation the slogan of the IIF, ‘Touching Lives and Fulfilling Dreams’. The Baby’s Day Out activities pointed at the IIF’s sustained efforts to bring fulfilment and happiness to couples.

The Baby’s Day Out was conceived as a platform to celebrate the birth of children from one-day-old to one-year-old by presenting gifts to mothers and babies at a party which always held in Ikorodu. Lagos.

As event planning was Ibidunni Ighodalo’s most visible occupation, the IIF created, during the December festive season, a perfect baby shower including themes, ideas, games and foods; which merged seamlessly into the Christmas festivity.

Following the Biblical tradition of Wise men from the East who brought gifts to Jesus Christ whose birth is being commemorated at Christmas, there was no restriction.

Tens of hundreds of babies and mothers would throng the venue between midday and 6.00pm to benefit from the IIF largesse which included mini furniture such as play table or rocking chair, toys, dolls, stuffed animals, picture books, keepsake boxes and cute clothing.

The cost of these items and the logistics of taking them to Ikorodu (venue of the event) run into tens of millions of Naira, which officials of the foundation refused to disclose.

The IIF statement does not discriminate on the social status of babies and mothers who can attend the event, suggesting that everyone is welcome.

That is the Ibidun we knew—always bringing laughter.

You came, you saw and conquered, Ibidun Ighodalo. Now rest gracefully and in peace, amen.

Denola Grey is on the Cover of MC! Magazine’s Debut Edition