The housemates have gone four weeks in the house and a familiar freaky vibe seems to have taken over.

The conversation in the house has gotten a little freaky and no matter how often they change the topic, they always find themselves back at that same freaky conversation. So why fight it, let it all out. 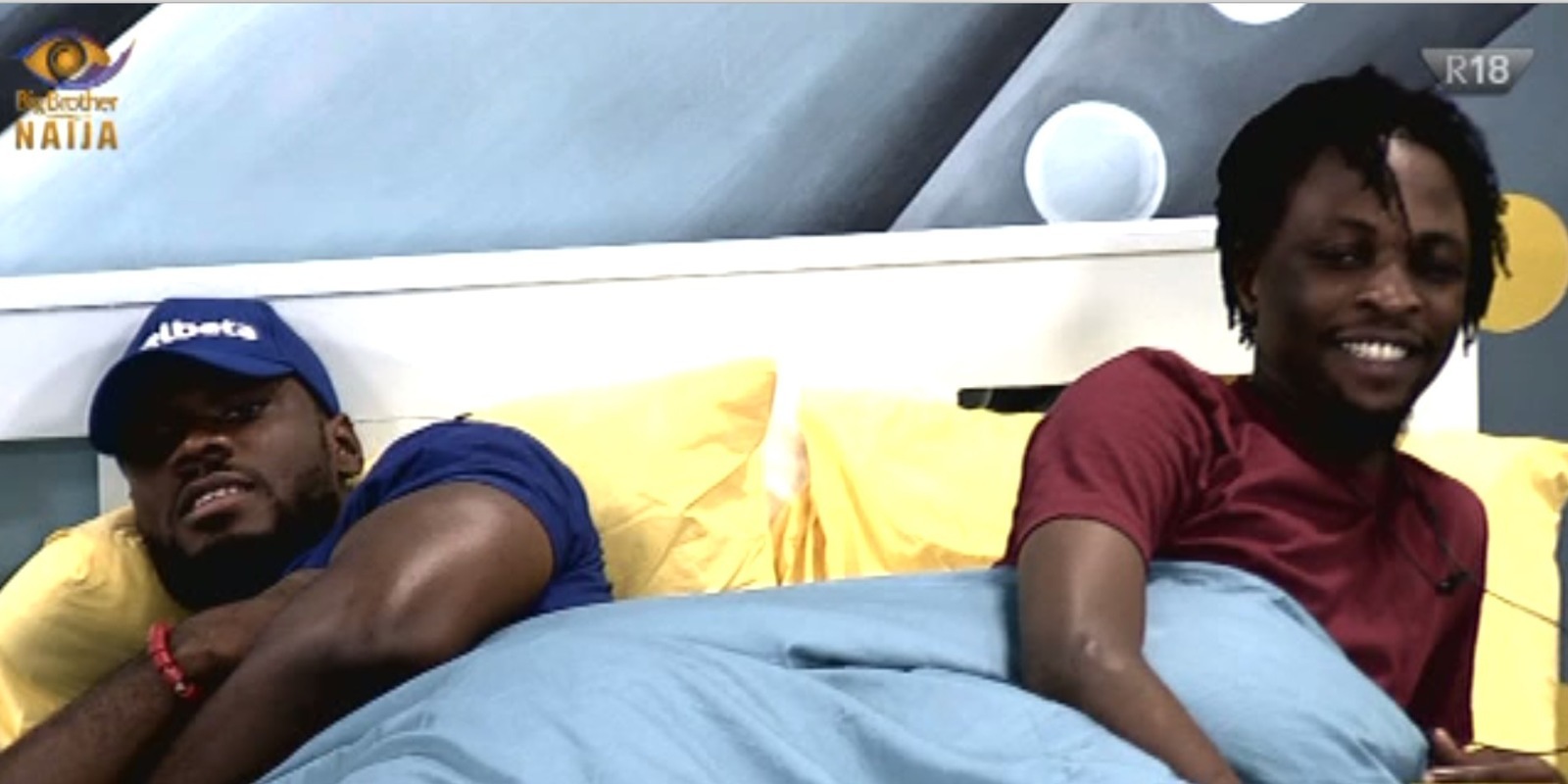 Praise sure has some of the freakiest stories for days and he tells them quite well. First, he teased Vee that the first time she and Neo ever get intimate, it was going to be fire and brimstone implying a volcanic eruption. Then he had a good time sharing some of the most explicit jokes as told by his favourite comedians. But he wasn’t the only one, the housemates had a swell time talking about self-pleasure and getting intimate in the house. Prince and Trikytee were pretty adamant that they would never have any form of intimacy in the house and would rather wait it out. There was the talk about bringing self-pleasing devices into the house and when to use them. Laycon suggested risking a fine for not going to the morning workout session and staying back to get a little pleasure in privacy wasn’t such a bad idea. Lucy expressed fear about being caught with a device in the house and maybe that’s why she didn’t bring any.

Put you on the game

Speaking about grooming, Kiddwaya shared a few tips about what it takes to look nice and found attractive by the opposite sex. Top on the list was the use of perfumes. “Perfume is what makes women attracted to you,” he said as he explained that smelling good is a big deal. Nengi approved of this as she reeled out some of her favourite perfumes.

The housemates weren’t done yet with the sensual convos. It continued as they prepared for the Saturday Night Party. As usual, they teased each other about how loud they’d sound in certain sensual situations with Wathoni being teased the most. Kiddwaya believed she’d be the loudest if she ever found herself in a situation of the sensual nature. Shortly after, Brighto became the target of the group when they asked him if he ate a certain delicacy. To which he responded, “how I go chow am, na food?” Sensing Brighto might be dragged into the world of explicit content, Tolanibaj spoke up and asked they do not spoil him with such content. It was all light humour, but we wonder if, underneath it all, certain regions of the housemates were beginning to feel the pressure and talking about it was their own way of calming the turbulent wave of hormones.

The housemates have just a few hours left as they prepare for the Saturday Night Party. Their attires are already here and from the way they immediately ran to the storeroom to get it, they are definitely ready to party.

Travelling to a win

To get the game going the housemates were divided into 4 teams named after iconic destinations in Nigeria. They were as follows 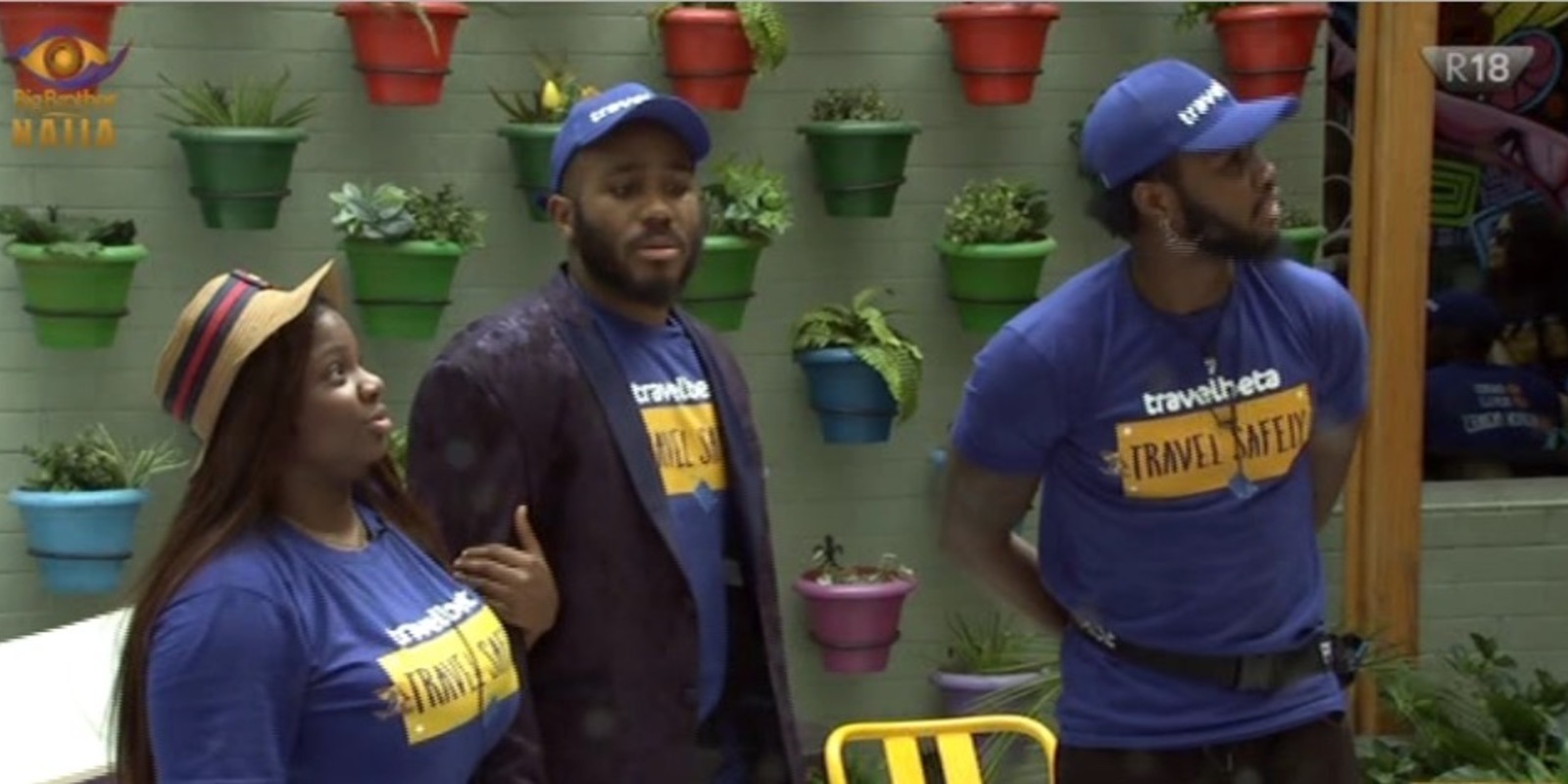 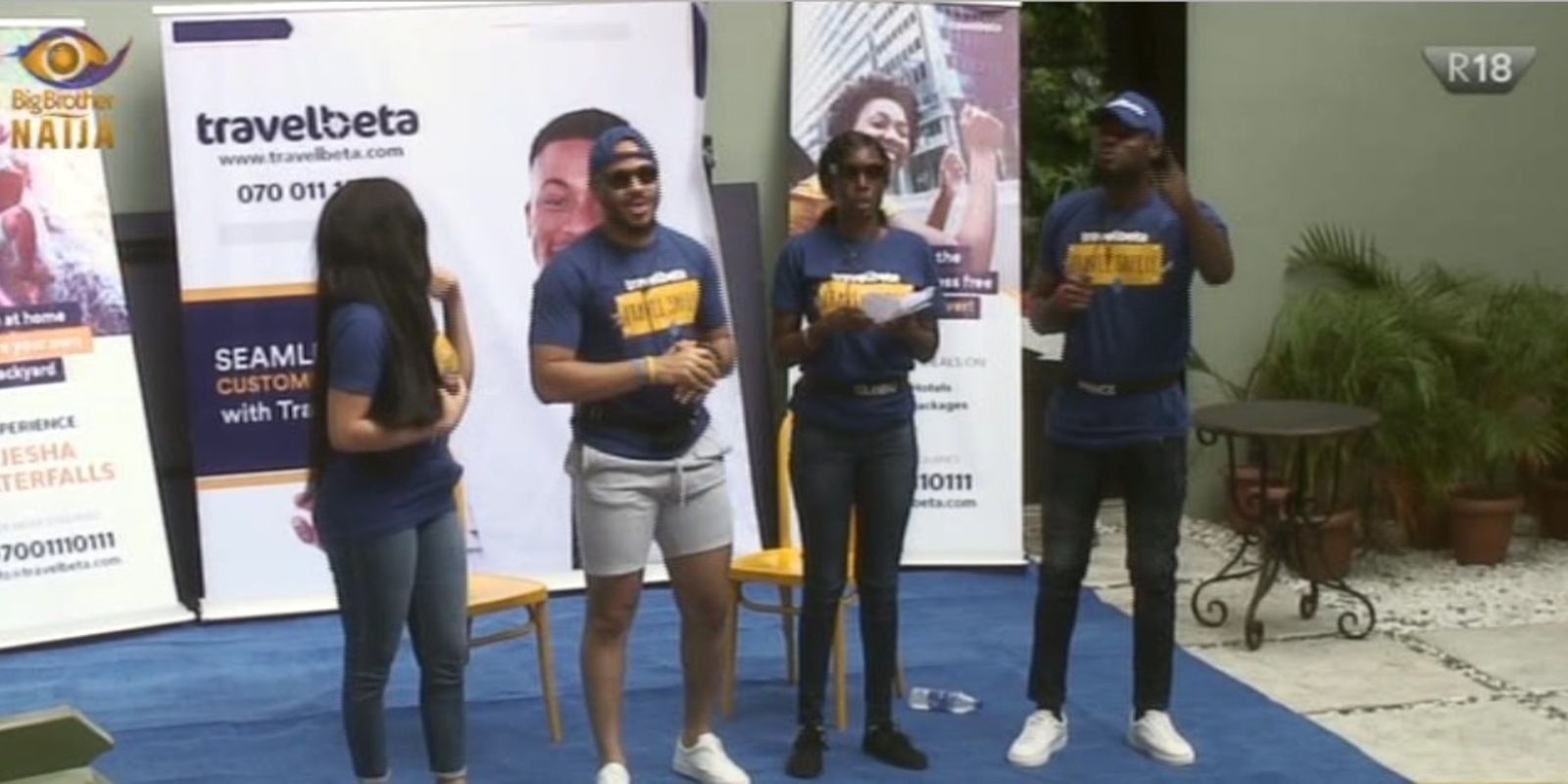 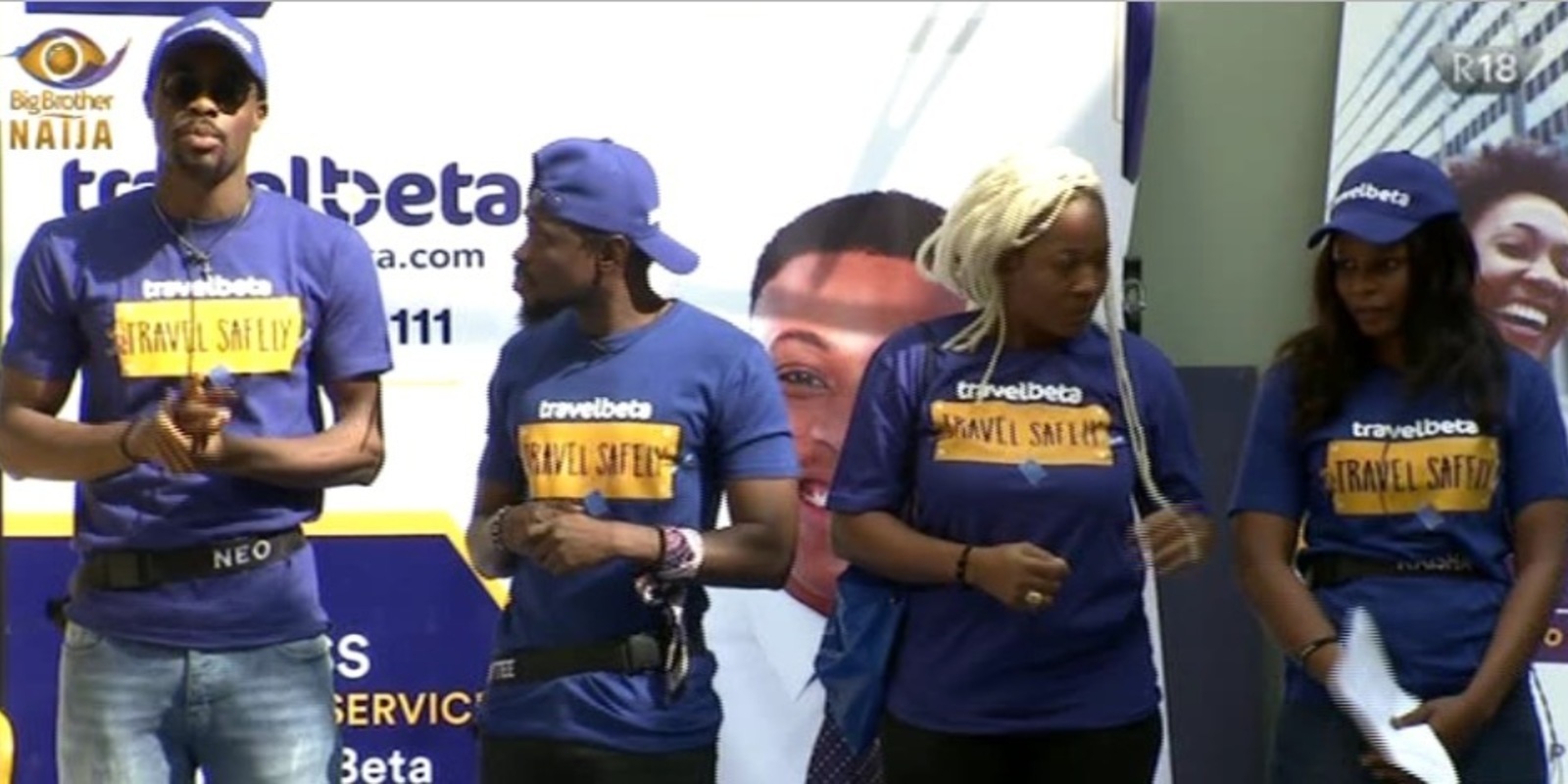 Part one: The crossword

The teams were given a crossword puzzle board, loose letters, and clues to fill the crossword puzzle. The blank spaces on the puzzle to be filled were 22 cities and states in Nigeria so the team with the greatest grasp of local geography was destined to be the winner. That team was Calabar Carnival who completed it way before the one hour of the allotted time.

For all their excellent efforts the two winning teams were each awarded One Million Naira to share. To thank the teams for their added creativity and sublime performances an extra prize of an all-expenses-paid trip to Abuja was added.

The successful completion of this task reversed all the negativity that had experienced in the morning and helped to set the mood for what will be another sizzling Saturday Night Party in the Big Brother Naija house.

The battle still rages on

It may seem as though the calm between Erica and Wathoni isn’t near yet.

Last night, Erica and Wathoni broke into a heated argument in Biggie’s House over an alleged boy-drama. However, according to Erica, her reason for being upset wasn’t centred around the guy in question, Kiddwya; however, she feels Wathoni has a problem with her because of the underlying triangle that exists between them.

If you missed it, watch it here

Today, they each continued with the rage as they discussed their different points of view to the rest of the Housemates.

First, Wathoni was found in the room talking to Nengi and Tolanibaj about last night’s drama. She made mention of the fact that whenever she talks to Kiddwaya, he doesn’t hesitate to spell it out that he is a free man, he’s nobody’s man. “Last night, she said she was done with Kiddwaya but the next thing she was already kissing man,” Wathoni pointed out. She also said she has had a conversation with Erica before and she told her that she didn’t like Kiddwaya, so seeing her kiss him and fight with her because of this same man really surprises her. “If I do stuff with a guy and he tells Ebuka that we’re just friends, no feelings, then I’ll just leave,” Wathoni said. She goes on to say she’s not taking Erica’s man but she’s quite upset that her son was brought into the fight.

Later in the afternoon, Erica and Tolanibaj were talking about this issue and just like Wathoni, Erica still seemed upset about what went down last night.

Erica expressed her hurt saying that she doesn’t understand why Wathoni keeps calling Kiddwaya whenever they have a problem, especially because she thinks that Kiddwaya is not the cause of the tension between them. However, she knows and thinks Wathoni wants Kiddwaya and looks for every reason to spite her. “I told her that I already have Kidd, and I don’t have to fight with anybody because of him, and if I’m tired of him I can tell him that he can go,” Erica told Tolanibaj. “…and Kidd he decides to leave me and go for her then he doesn’t have great taste and I can’t be with someone that is tasteless,” she added.

According to Erica, telling Wathoni to act her age last night was said only because Wathoni brought it up first. She goes on to explain how she didn’t even remember that she has a son until Wathoni kept referring to the fact that she’s focusing on winning the grand prize and that she has a son to be worried about instead of chasing men.

Unfortunately, the tea they were serving was being cut short by Biggie as he fined Tolanibaj for microphone infringement. Gist sometimes comes expensive in Biggie’s House.

We got some of your reactions

We still don’t know how things got this heated; this drama from Erica wanting to know why Wathoni seems to have issues with her, to insults flying all over the place. We’re anticipating a reconciliation tonight at the Saturday Night Party when the mood is a bit lighter and the Housemates start grooving so hard. Well, fingers crossed.

Dancing away the bad vibes

To rid the house of the negative vibes, the Lockdown Geng have turned to dance to usher in a bit of good energy.

Way too much has been going on and the House was almost turned inside out by the Lockdown Geng but all seems calm now thanks to cool heads and a brief dance session to liven the mood. 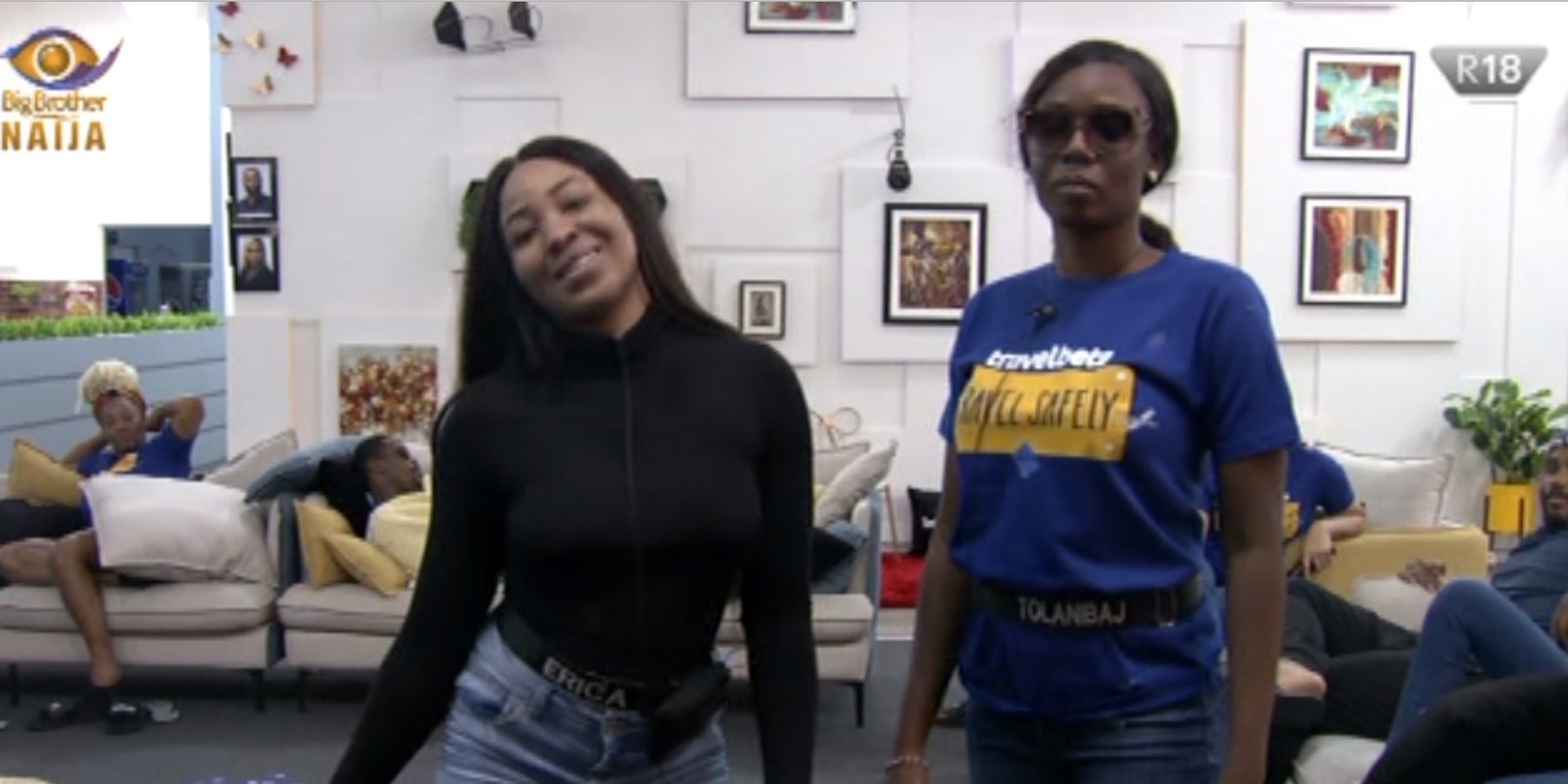 Working up a mood for tonight

In the past 24 hours, life in the House has been heated. The positive energy the Lockdown Housemates are usually known for has taken a hit. Fights and intense battle of words have unsettled the relative calm the House has been experiencing for a bit. From Erica and Wathoni, Nengi and Kaisha and Dorathy’s back and forth with Ozo, it’s been nothing but heated confrontations. No one likes altercations, but there seems to be a bit of pent up anger and keeping it tightly sealed has gotten harder. With the Saturday Night Party approaching, the Lockdown House needs all the positive energy it can get in order to keep the mood interesting and the groove just right for the Party. The Travelbeta Challenge seems to have broken the ice and lightened the mood. The quick dance session also helped out as the Housemates danced away the sullen vibes, but still, the cold war can still be noticed as warring parties kept their distance. Hopefully, everything changes later tonight.

Of course, there is a tomorrow and tomorrow comes with Eviction but for today, the Housemates will dance till they drop. As the Saturday Night Party draws near the Housemates have already picked up their dancing shoes and started vibrating to their favourite old Naija hits. It’s almost like Biggie paid attention while they sang their favourite old songs yesterday and decided to turn things up by playing the songs for them. As expected, the Housemates let down their guards and all the pent up anger and vibed to the groove.

Later tonight, the housemates will gather on the dance floor and party with DJ and Crowd Kontroller and Terry The Voice. Here’s hoping swords will be sheath and warring parties will make up.

Please turn up to our turn up 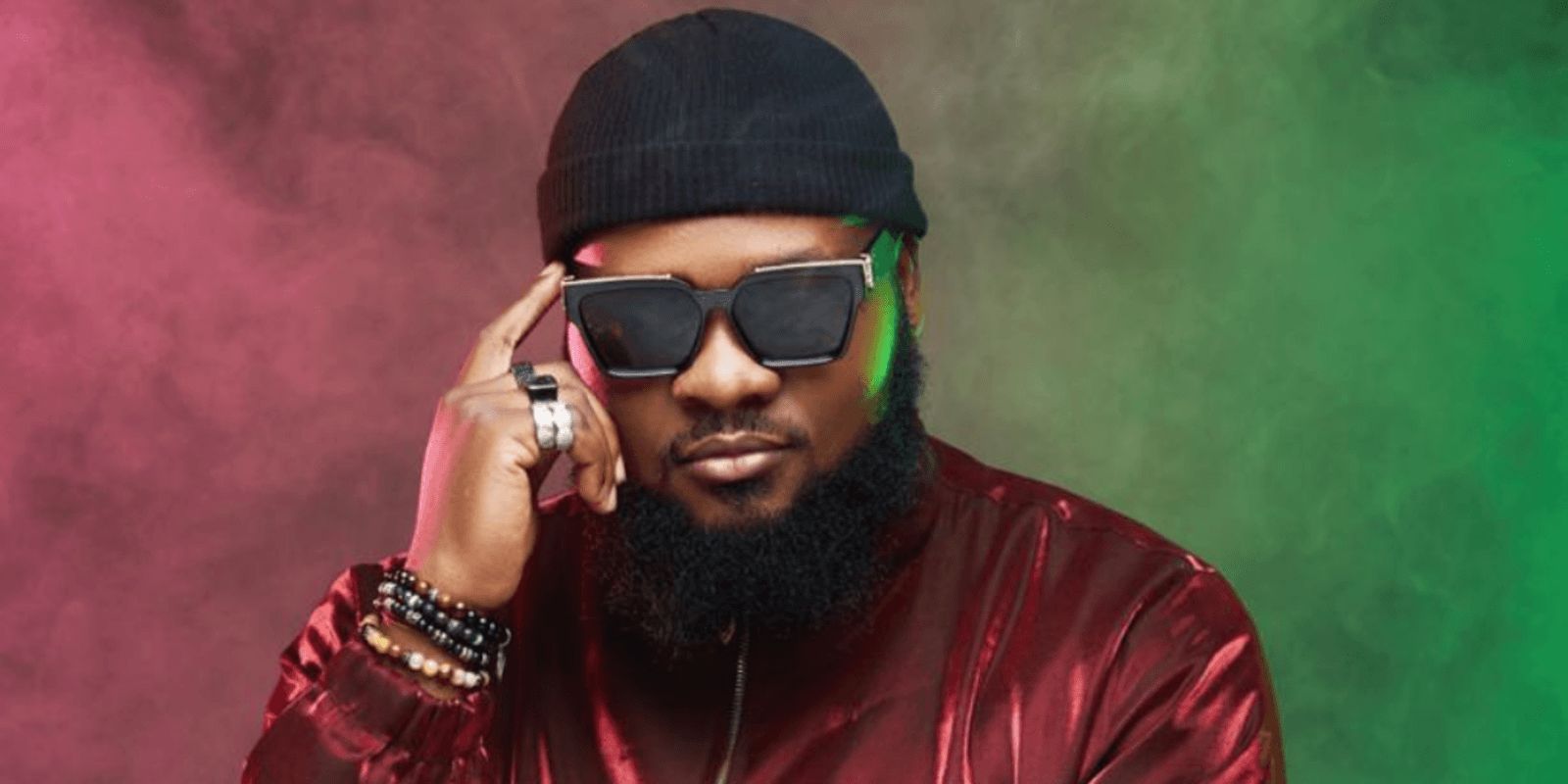 Tonight in Biggie’s House we will be joined by CrowdKontroller and TerryTheVoice, and if you miss them, you will miss out. Over the past weeks the Big Brother Saturday Night Parties have brought so many first-class artists to the House that tuning in has become the safest and best way to turn up. Tonight is no different as the finest Naija talent will assemble to get your booty shaking like there was an earthquake. 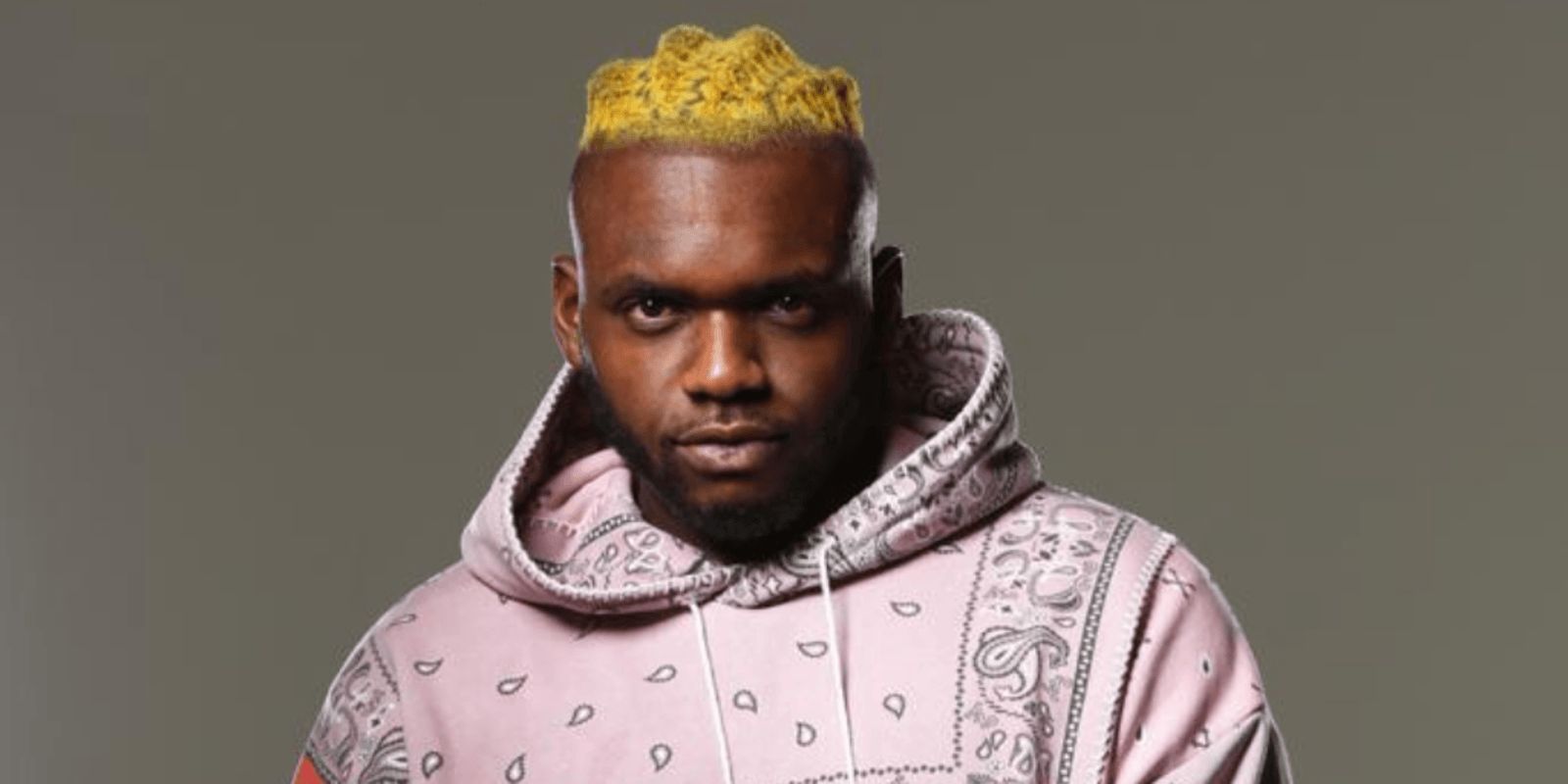 So if you want to enjoy the only party where there is no chance of catching anything other than a great beat, tune into Big Brother Naija tonight and make our turn up, your perfect night out.