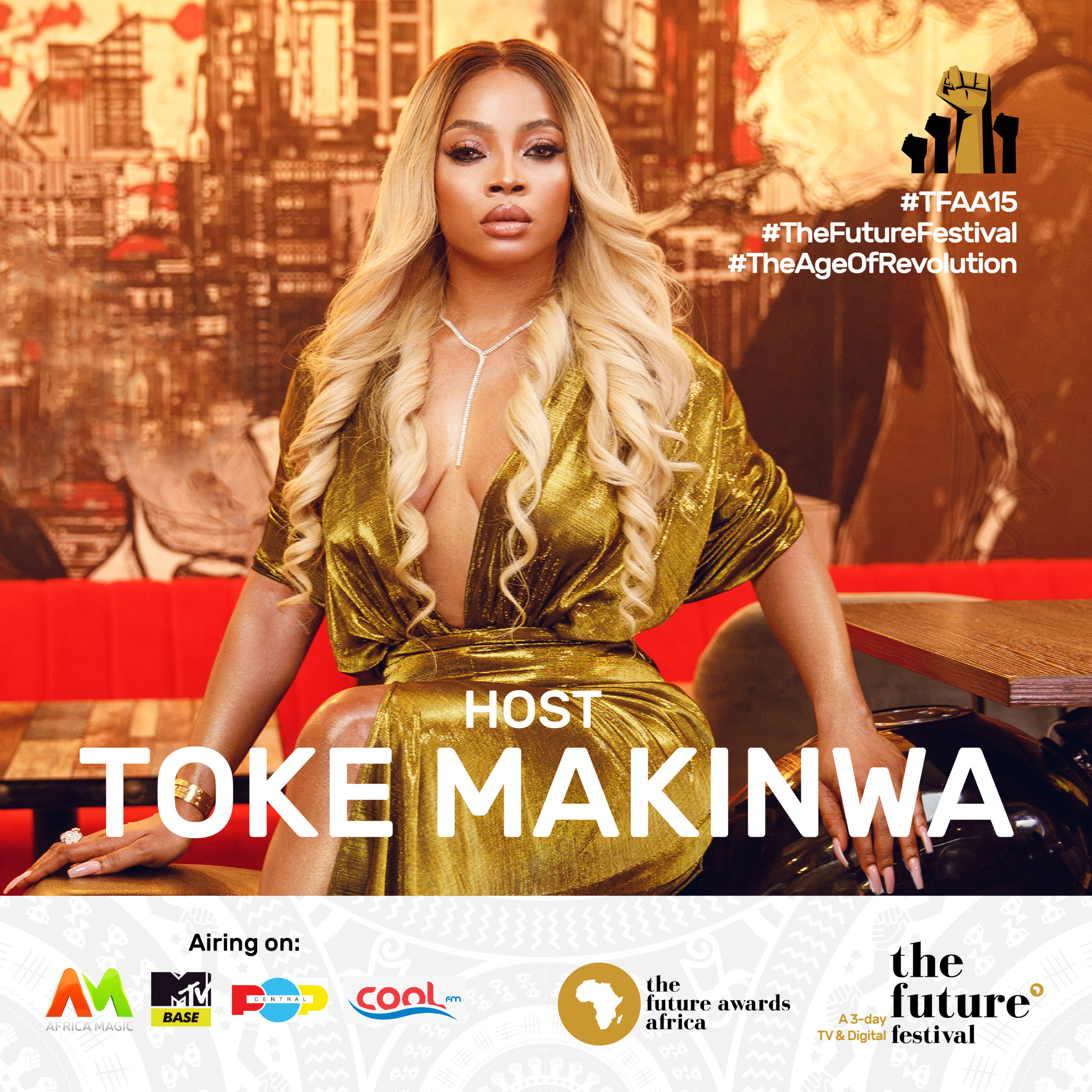 For its first-ever TV and Virtual event, The Future Awards Africa (TFAA) has announced on-air personality and one of Africa’s biggest social influencers, Toke Makinwa as host for the 2020 edition of TFAA in a cross-platform online exclusive event. It is also the 15th year anniversary of the awards.

The star will be taking the stage in the show’s first-ever virtual hosting arrangement, a move that is an homage to the tremendous feats accomplished in the year 2020 in spite of Covid-19’s global turbulence.

Hey people., I am excited to announce that I will be hosting the 15th edition of The Future Awards Africa 2020 @tfaafrica in partnership with @ynaija and @thisisyafrica. This is most special to me because for the first time, we are having a virtual (TV & Digital) awards show and the theme for this year, ‘The Age of Revolution’ resonates deeply with me as we all can witness the need for change in Nigeria and Africa, and the power we possess when we become one voice. The event will be airing on Africa Magic, MTV Base, Pop Central and Cool FM. In November I will be unveiling my co-host We’ll also be announcing the date and time then – for you to catch your baby girl in her element! Let the countdown begin. #TFAA15 #TheFutureFestival #TheAgeOfRevolution

The awards are part of the 3-day TV & Digital Festival presented in an exclusive partnership with continental giants Africa Magic and MTV alongside Pop Central TV. The event will hold in November 2020.

“There has been so much confusion this year that there have been times when one would not have been seen to be exaggerating if they said they see no hope for stability or a light at the end of the tunnel,” says Bukonla Adebakin who is the chief operating officer of RED | For Africa, presenters of the awards and Senior Advisor to The Future Project. “Yet one thing has remained consistent, and that is the power that the youth unleashed in 2020.”

“They haven’t just unleashed power, but they have forced important change, everywhere in the world, and across. The media campaign #TheAgeOfRevolution that we will unveil in November will underline the power and the magic of this historic moment. The Future Awards Africa will be celebrating what makes young people special and what keeps youth culture winning.”

Makinwa’s co-host will also be announced in November.

The Future Festival will be donating 25% of all accrued profits to a coalition of NGOs working to end sexual and gender-based violence. The NGOs are Stand To End Rape, The Mirabel Centre, Wine and Whine Ng, and Women at Risk International Foundation.

Updates on the festival can be monitored via @tfaafrica on all social media platforms.
The official hashtags for 2020 are #TFAA15 #TheFutureFestival #TheAgeOfRevolution

The Future Festival 2020 is delivered by The Future Awards Africa in partnership with Y! Africa. Other Official Partners are Cool FM, Wazobia Max, and BellaNaija.com