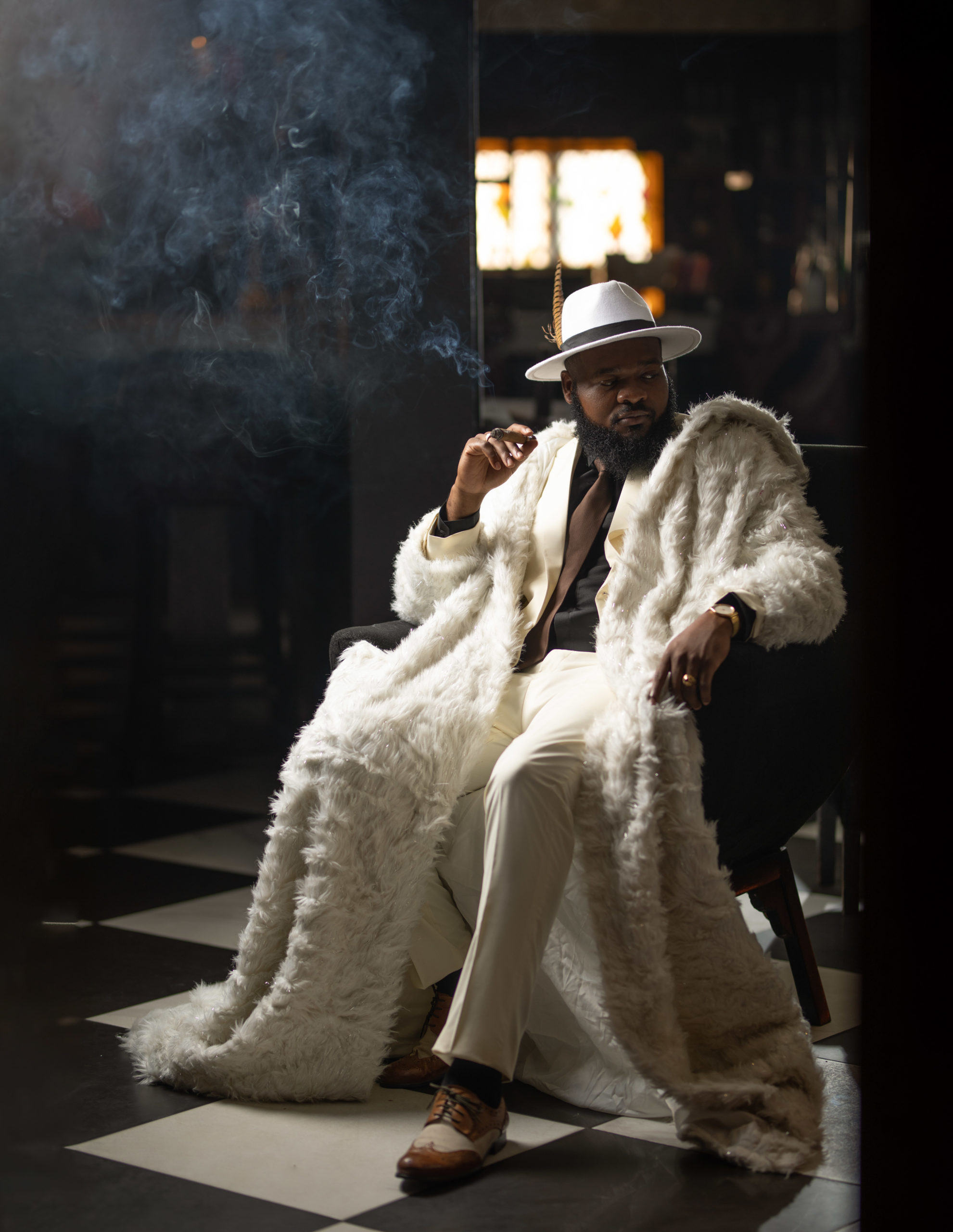 Draped in a fur coat, brogue shoes, and smoking a Gurkha Black Dragon cigar, it’s clear everything about Crowd Kontroller Is deliberate.

Working with the celebrity stylist @thestyleinfidel and the sought after photographer @kunmi.owopetu the imagery in style looks impeccable. 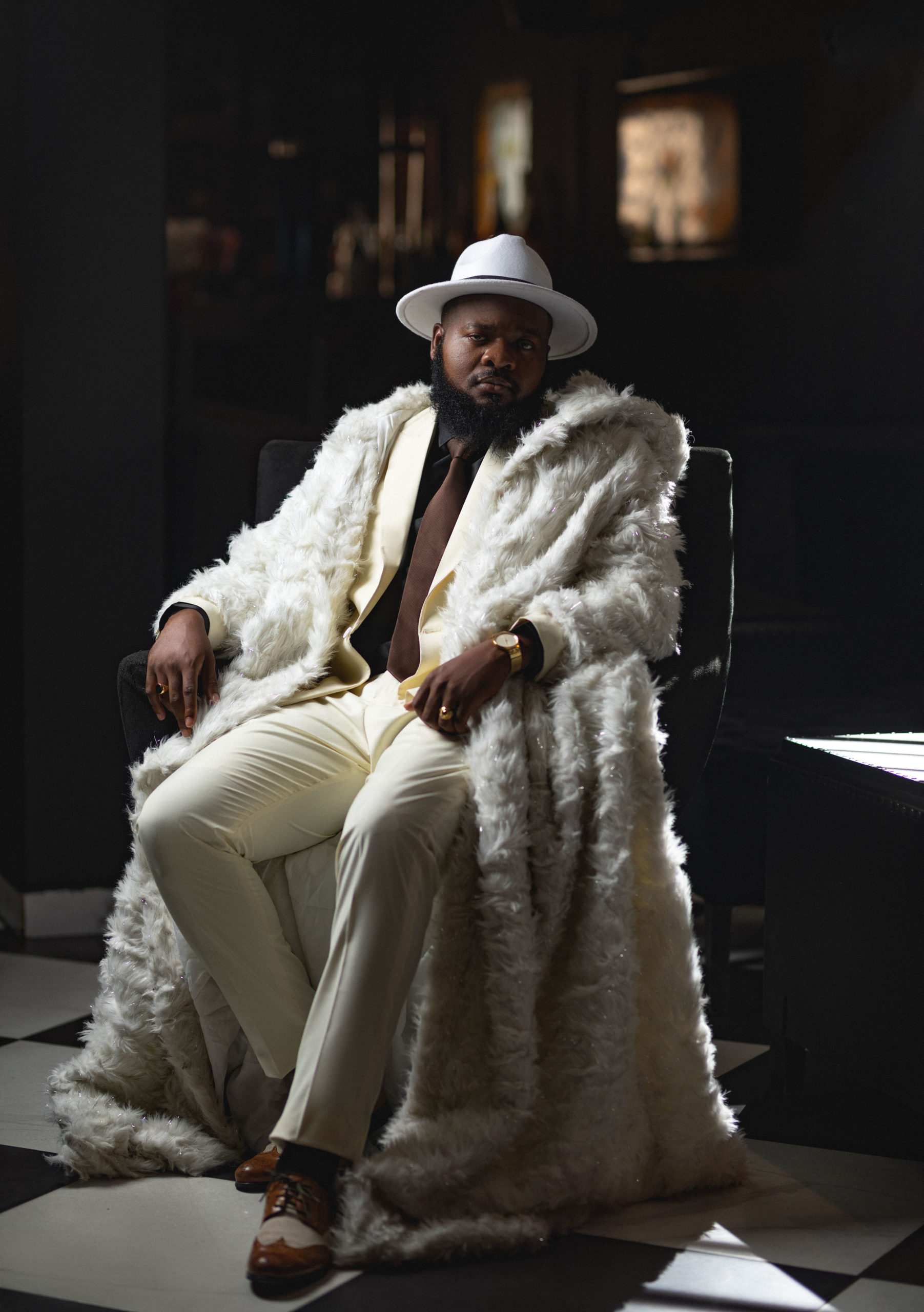 It’s no wonder that Crowd Kontroller has slowly grown to be one of the renowned DJs of 2020, a brand Ambassador of @budweisernigeria, the Official Dj @oneafrica_musicfest a resident Dj of @thebeat999fm and @vellvettlagos managed by @defearsmanagement it shows everything about Crowd Kontroller is deliberate. 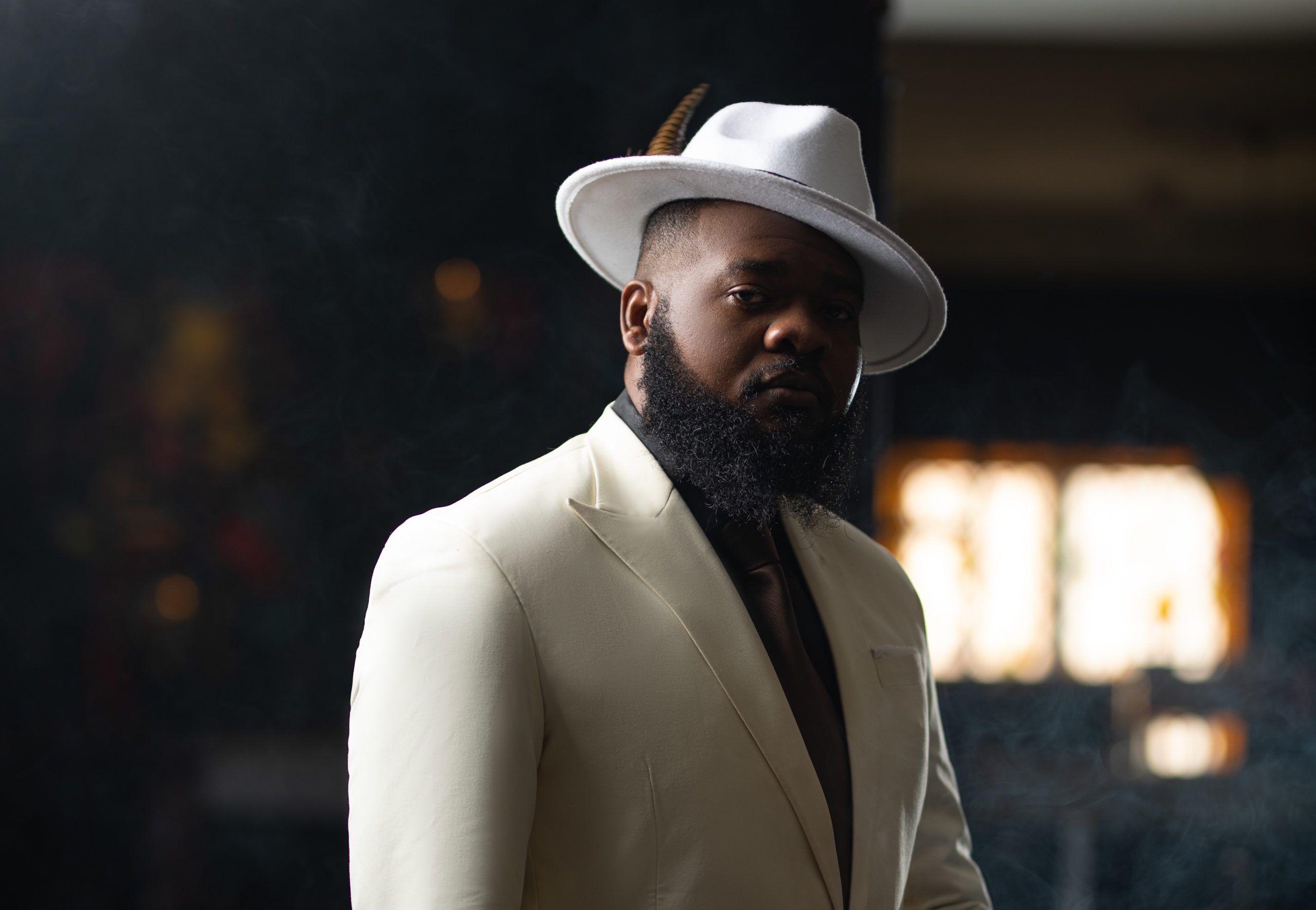 In 2014 Crowd Kontroller started learning how to DJ while in the university but only started professionally in 2015. He fell in love with the craft back while observing various DJ’s he used to bring to his parties he organized back in the Uk. Two key individuals have been DJ Keys and DJ Exclusive. As a result, his love for music expanded. 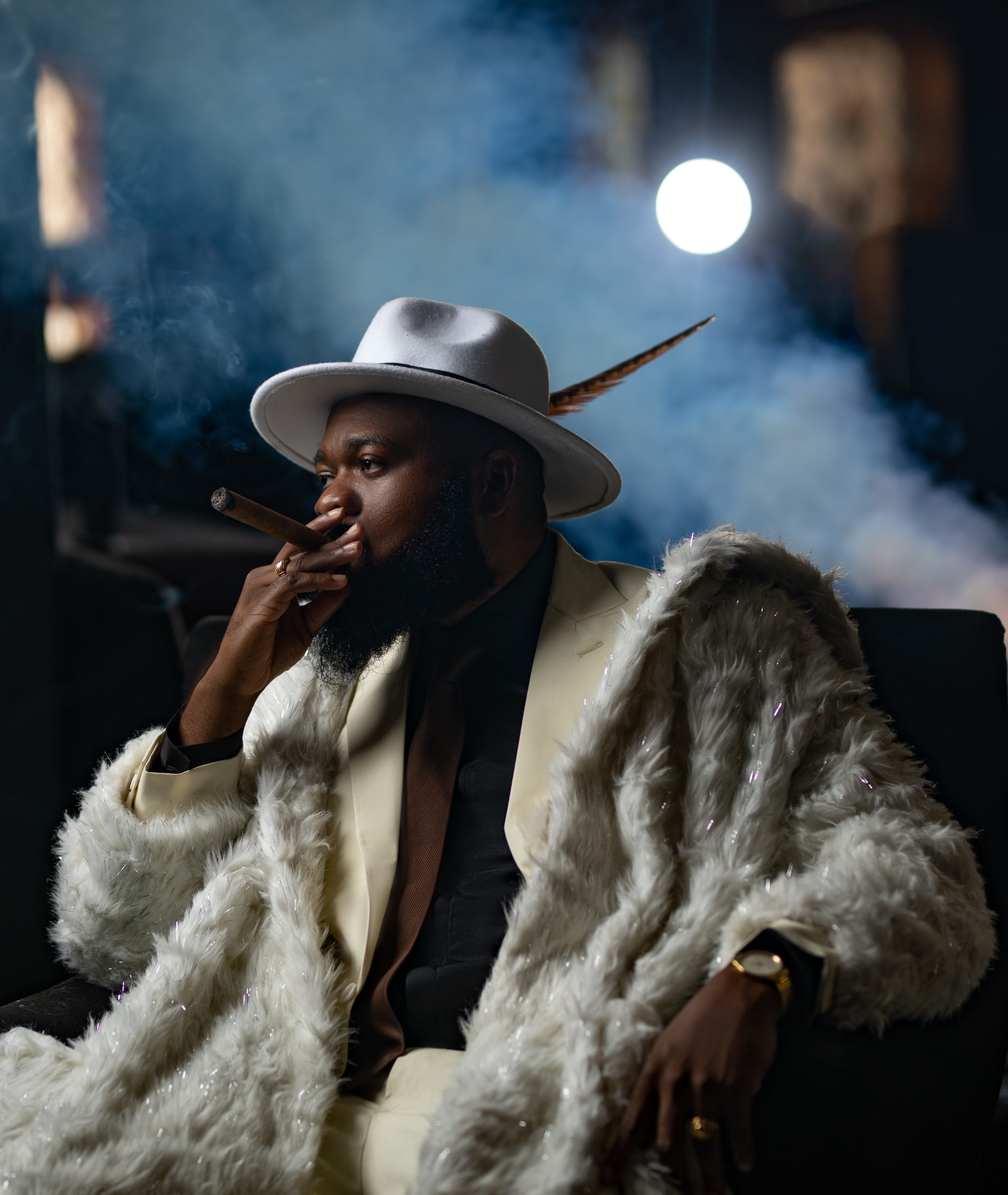 When he is in his space, he listens to a lot of mellow music from South-African house, deep house to trance, UK grime, and Afro-swing, but once it’s time party, he knows what to play. 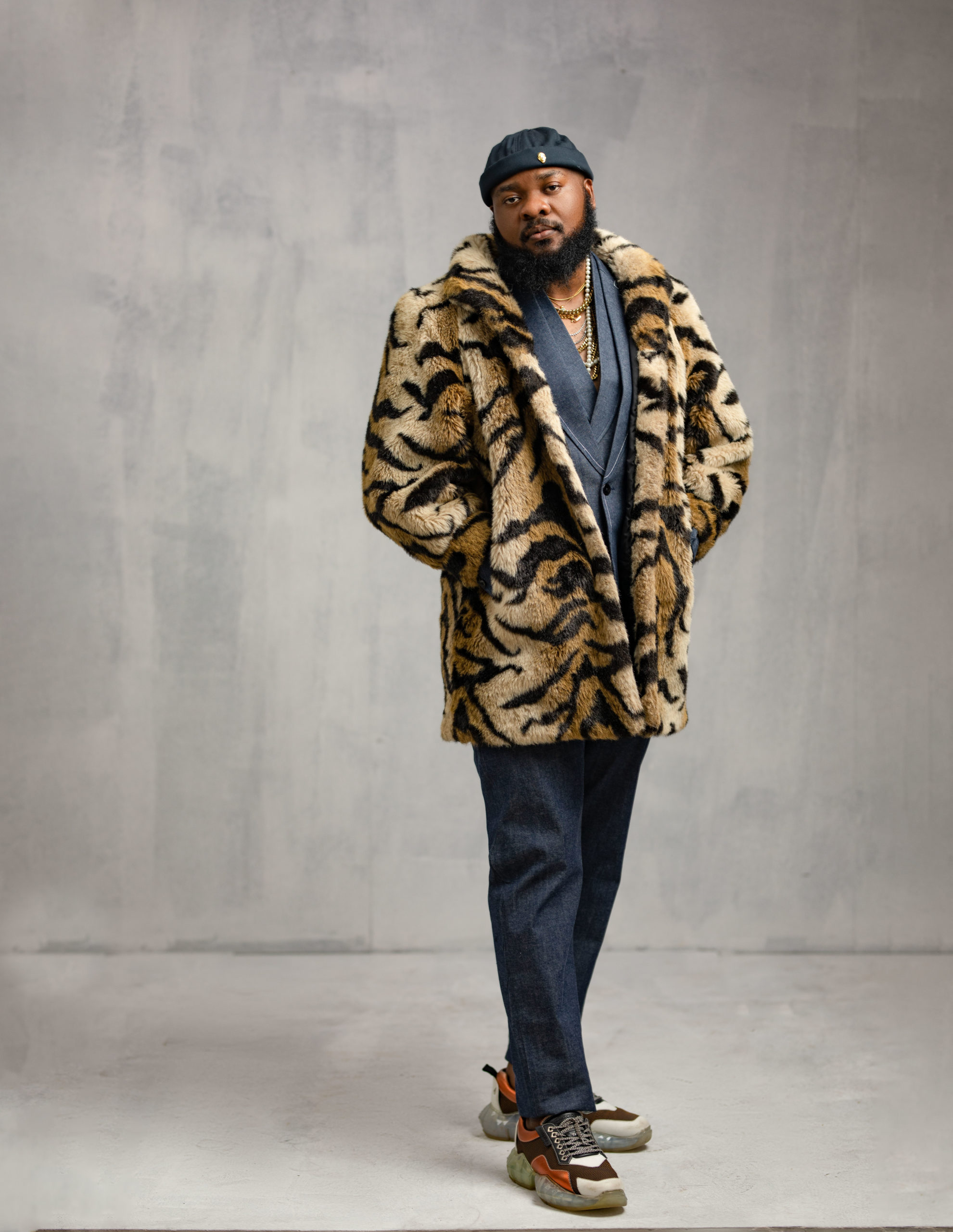 Crowd Kontroller is detailed with his love for music and has an uncanny ability to read the crowd. He walks into spaces and knows exactly what to play when to play, and how to play. Everyone has access to music but Ck boasts of his vast library of music specifically curated to bring out songs from any era or genre to create an experience with the crowd.

“Knowing and loving the music is very important. You can always tell when the DJ loves the music he’s playing or knows what he’s playing. There’s a clear difference” 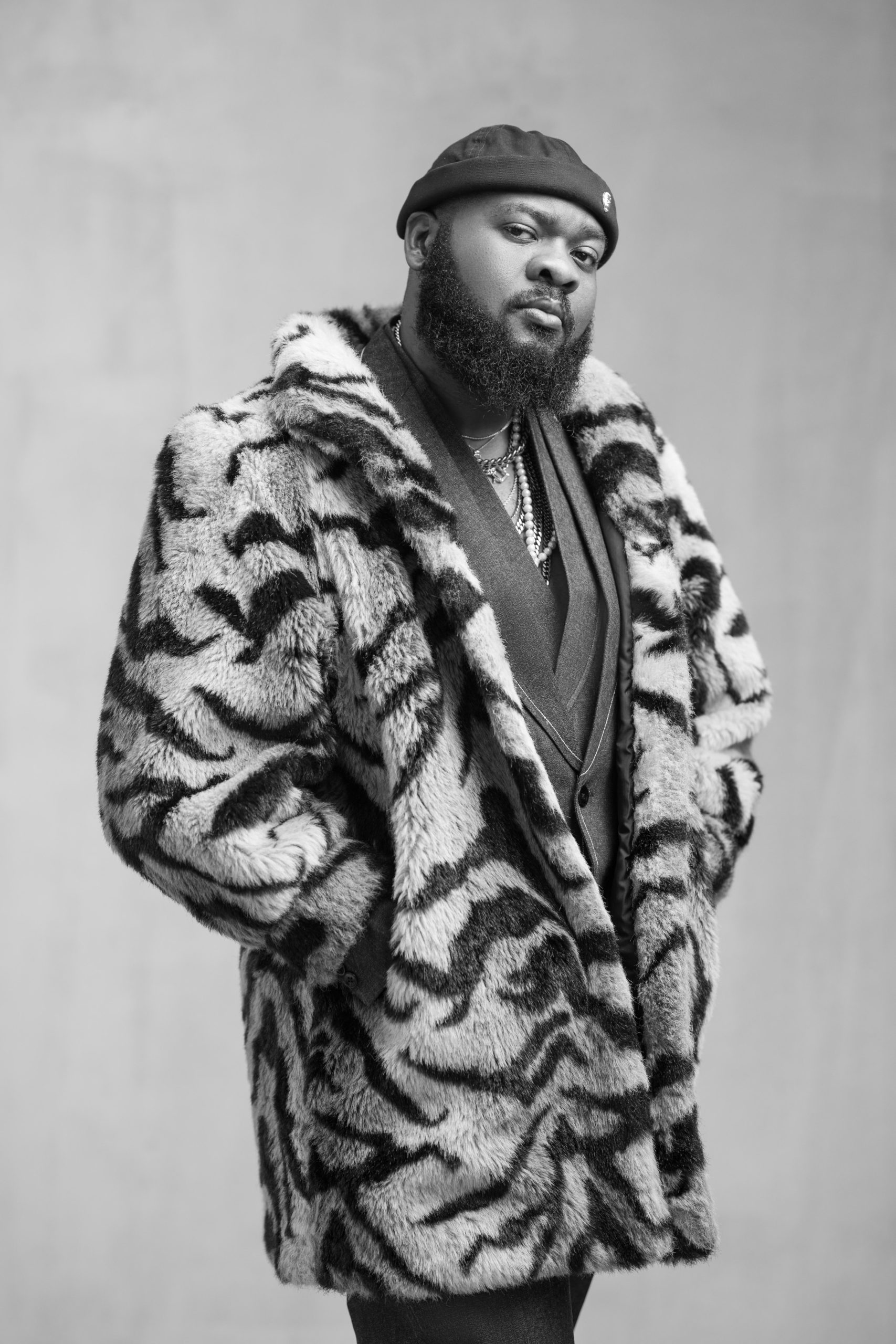 Crowd Kontroller is a nocturnal soul and gets inspiration late at night to create his mixes. CK Practicing every day for two hours a day to perfect his craft, one wonders how he has slowly crept up to our list of DJs to have at a show or event. In his earlier days in his words,

“It used to be five hours a day, but now that we are getting busy, In those hours, I come up with a mix. I don’t mix out loud, I mix in my head. I mix with headphones, not speakers, so I don’t disturb anybody”

The journey is still far ahead and the pinnacle for Crowd Kontroller is playing at international festivals and winning a Grammy as far-fetching as that sounds. He believes that a DJ can get a Grammy. With this goal in mind, he has been working on new music with various artistes like Dapo tuburna and intends to release some of his songs later this year.

Covid-19 was a huge factor in delays and bookings also got in the way of creating music hence why his milestone is to release something this year.

“DJs were not at the center front, but now they are. Last year, two of the biggest songs were from DJs. We are now getting endorsements, and also influencing what is going on in pop culture in our country. People are also beginning to pay top money to DJs and are understanding our value. I think more educated people should go into DJ’ing, we shouldn’t think DJs are street boys or whatnot. To be honest, I think DJ’ing is Physics. It’s calculations and engineering. You literally calculate sound and time”

What is next for Crowd Kontroller you might ask? He is releasing a new merch, currently shooting and creating more videos, definitely new music.

Crowd Kontroller prefers to put music last because everybody expects DJs to put out music, but he is doing the unexpected and carving a new path for himself and fulfilling his role in taking the craft up a notch.

So much to be excited for

Introducing the New Vivo V20: With its Exceptional Qualities, Now You can #Bethefocus