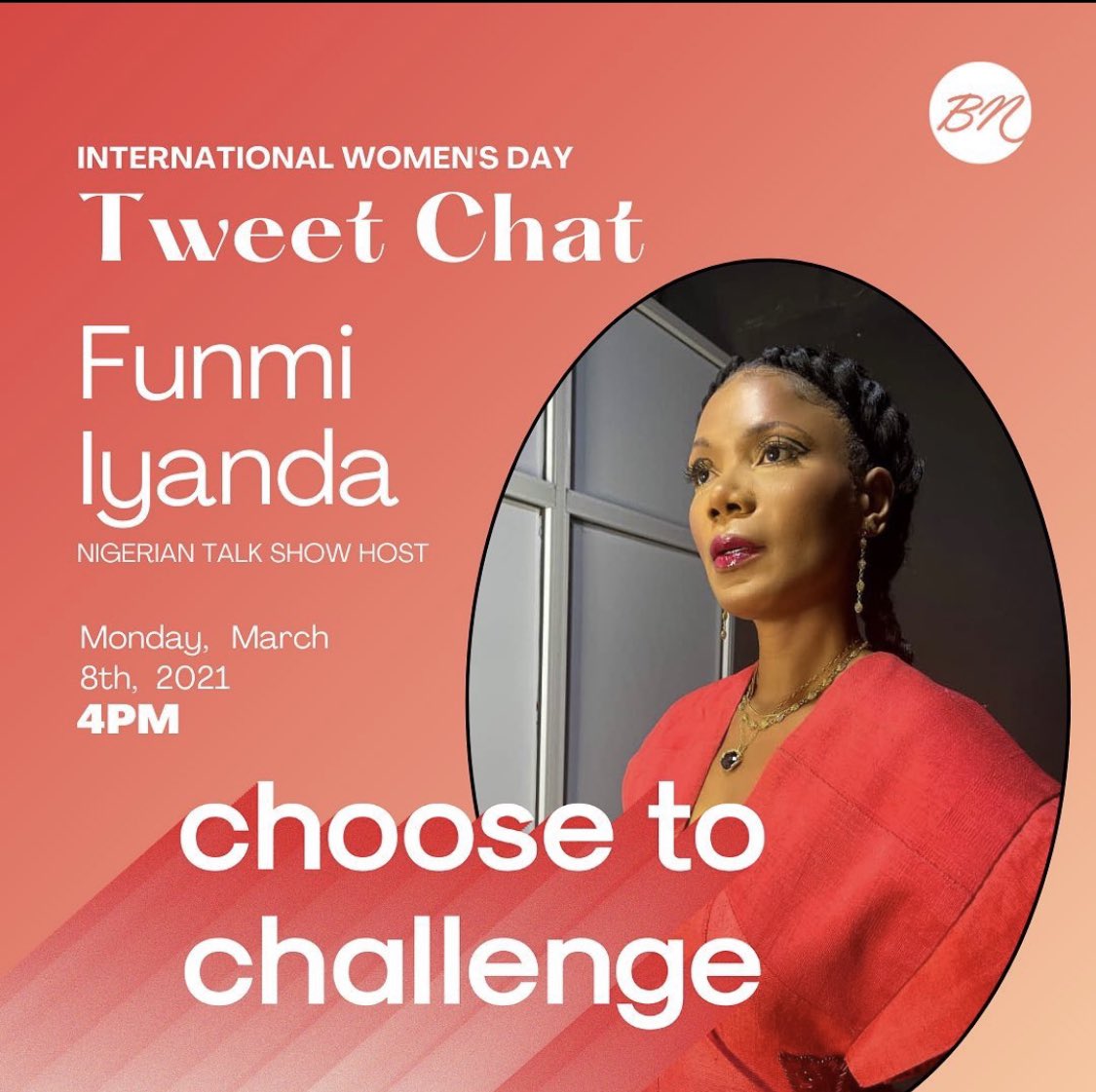 All through this month, we’ll be hosting a series of Tweet Chats with women who are helping to forge a gender-equal world; women who, in line with the theme for this year’s celebration – Choose to Challenge – are tackling gender stereotypes, celebrating women’s achievements and raising awareness against bias.

For the first series, we had a chat with media icon, activist and talk show host Funmi Iyanda about her work and how she’s challenging barriers to a more equal world.

Here are the questions we asked and what she had to say:

What does the International Women’s Day theme, “Women in leadership: Achieving an equal future in a COVID-19 world”, mean to you

The disruptions brought by Covid-19 show that the workplace can be a more accommodating place for women’s roles as mothers (if they chose it) as we can see now that a lot can be done from home or elsewhere and in ways that are more flexible but no less productive. This will improve earning potential and capacity so female capital can grow. What matters is self-determination for all humans, especially female humans. Having your own money helps a lot. That’s why so many cultures deny women the sort of education, opportunities, non-reproductive creativity, and validation that would support self-determinism and full self-expression.

In your opinion, why is it important that more women take up space in the media industry?

Thoughts are the operating tool of human consciousness therefore anyone who controls it owns and influences the process, institutions, and mechanism of shaping thoughts has immense control over large swathes of people. As half of the world’s population, it is important women shape how the world thinks of everything. It’s important that this shaping is done by wise people, especially wise women.

What barriers have you faced to becoming successful in the media? How did you overcome them?

Too many to count, too maddening to recount, too disempowering to duel on, especially as it is an ongoing entity. I overcome everything with the sheer force of my will to live fully expressed.

Do you think there’s a stereotype attached to women in media?

The common stereotypes attached to every woman in every field are victim, vamp, or vampire, the most dangerous of these is a victim because of its stealth and pervasiveness. No matter how successful or powerful a woman is, she is only “relatable” when she shows in some way that she “suffers”. As though we don’t all suffer for several reasons and at different points as a by-product of living, especially living fully expressed. This victim relatability, often disguised as being vulnerable, is a stealth hostile takeover. Resist it. Vulnerability is honesty, self-awareness, and courageousness, the very opposite. The less women suffer and the less glorification of women’s suffering, the better. This does not mean a vacuous sunniness which flattens but an allowance of the full range of human glory and madness for women as is given /allowed for men.

What’s the most important piece of advice you’d give to a woman thinking of starting a career in media?

Find your niche, affect the space and keep an eye on your money.

As women, how do our individual actions, conversations, behaviours, and mindsets have an impact on our larger society?

Everyone impacts everything and everyone else. The more self-aware, self-determined, and fully expressed women are, the better their impact on the larger society.

Perhaps the age-old relation of the existence of women to men rather than to self. Men and women are separate and whole units in of themselves but inter-relatedly complimentary of one another if one is not valued over the other.

Changing that will require raising men not to value themselves about women, so they stop being so fearful of the power of women. Similarly, once women do not position their existence in relation to men, they too would not overvalue men so much and come into more engagement with their power. From this point, all can share their free will.

It’s a tall order to re-write ancient evolutionary habits, but we are no longer in the wild so they don’t serve us much.

Our existence is much affected by our habits as determined by our thoughts, that’s why media is important, to speed up the habit of changing process.

How important is it for women to lift each other up and what does that mean to you?

Women should become conscious that most of our venerated institutions, systems, and thinking limit all women and many men, so more women must resist enforcement, coercion, and manipulation of these on themselves and others. If women participate less, men will make the necessary adjustments. The best way to change others is to change yourself.

What is the most important lesson in leadership you want young women to know?

Age is contagious don’t let anyone number you. Time is elastic and limitless. You have time, pay attention to what fires you at every point in life. Do that. Maybe some wake up wanting to be “leaders”, but most people lead by creating amazing things, following and enabling others to do the same. We are all leaders and followers, but we can be sublime at certain points on the spectrum. Superwoman is the woman who realises being human is super.