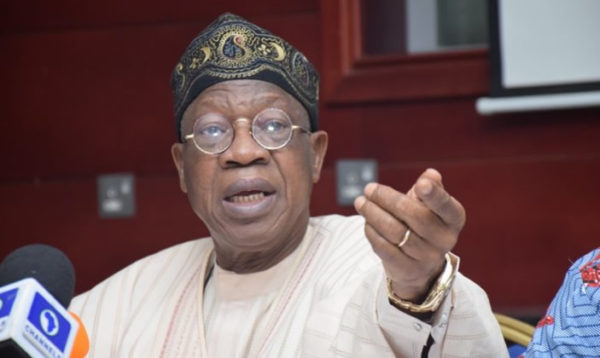 The Federal Ministry 0f Information and Culture via its official Twitter page has released a press statement, announcing the indefinite suspension of Twitter operations in Nigeria by the Federal Government.

According to the press release shared on Twitter by Segun Adeyemi, The Minister of Information and Culture Lai Mohammed, made the announcement in a statement issued in Abuja on Friday.

The decision was made because of the “persistent” use of Twitter “for activities that are capable of undermining Nigeria’s corporate existence,” the press release stated.

The Minister added that the FG has directed the National Broadcasting Commission (NBC) to begin the process of licensing all OTT and social media operations in Nigeria immediately.

The Federal Government has suspended, indefinitely, the operations of the microblogging and social networking service, Twitter, in Nigeria.

The Minister of Information and Culture, Alhaji Lai Mohammed, announced the suspension in a statement issued in Abuja on Friday, citing the persistent use of the platform for activities that are capable of undermining Nigeria’s corporate existence.

The Minister said the Federal Government has also directed the National Broadcasting l Commission (NBC) to immediately commence the process of licensing all OTT and social media operations in Nigeria.

Segun Adeyemi, Special Assistant To The President (Media) Office of the Minister of Information and Culture Abuja.

The Minister of Information and Culture, Alhaji Lai Mohammed,
announced the suspension in a statement issued in Abuja on Friday, citing the persistent use of the platform for activities that are
capable of undermining Nigeria's corporate existence.

This comes a few days after the social networking service allegedly took down a series of Tweet made by President Buhari concerning the security situation in Nigeria, and some months after announcing the set up of its office in Ghana for Africa operations.

See how everyone is reacting to the press release:

Must we kikiki about everything??
This Twitter in Nigeria ban is not funny! Federal Government does not rate us! Because what is THIS!!!

The banning of Twitter in Nigeria will send a message to the tech ecosystem in Silicon Valley.

This might also affect the "friendly place to do business' indices.

You mean the Federal Government released a press statement on *Twitter that they’ve banned Twitter in Nigeria. The comedian of the year award belongs to FG.

insecurities, electricity, health, education problems are there buh the only thing federal government can ever thought of doing is suspending Twitter in Nigeria ??? lmaooo

The Federal Government wants to suspend Twitter in Nigeria but uses the same twitter platform to make the announcement? Isn't this s!lly? The FG is just pissed they can't dictate what happens on twitter, anything this shameless govt can't control or manipulate, they try to ban.

But you're still here.?

I still don't understand why Nigeria is dancing backward on daily basis. All the countries out of Nigeria and they don't think for once. Anything that kicked against government is what they turned back at. Shameless people that did not hv deep thought and way forward. Zoo country

.daily, we see a supposedly democratic government swim in the ocean of dictatorship & irresponsibility… most unfortunate is that, these irritants used same platforms & vehicles to attain power… am glad history has a vast catalogue that shows the end of these tyrants!!!

I cannot mention all other services or business that are thriving because of Twitter but from the little I know, many are blessed by retweets of their posts through friends and followers. If the president decides to speak concerning the insecurity of the nation, no problem…

Give us the kind of government we want…

Does that mean we made mistake…?

Does that mean we are been fooled into believing in Him with all our heart that mr president is the right choice?

The most common method is the use of virtual private networks (VPNs). This encrypts data and making it difficult for service providers to block access.

While you can use TunnelBear & Hotspot Shield in free mode, you need a subscription for the rest. Good thing is, you can pay with Bitcoin or Perfect Money.