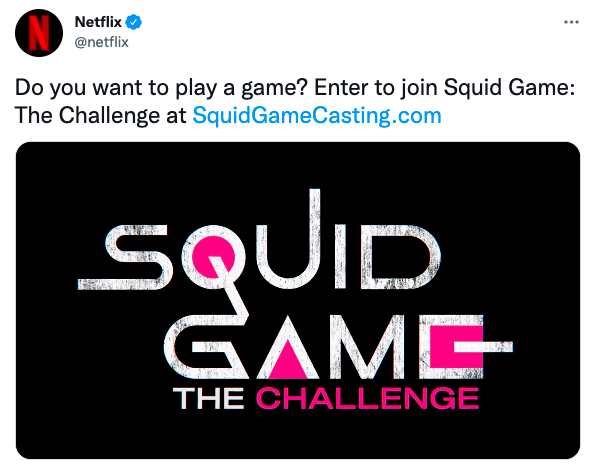 Netflix revealed on Tuesday that a new reality competition series based on “Squid Game” is in the works. “Squid Game: The Challenge” is the title of the show.

Do you want to play a game? Enter to join Squid Game: The Challenge at https://t.co/MaXfZnqmvb pic.twitter.com/6gYLXlplDC

In case you haven’t seen it, “Squid Game” is a fictitious South Korean series in which participants compete in a series of children’s games that would kill them if they fail, all for a huge amount of money.

The streaming platform announced casting for the new series in a teaser featuring the aforementioned “Red Light, Green Light” doll and a host of masked guards. In a statement, it said that “Squid Game: The Challenge” would award the biggest cash prize in reality TV history — $4.56 million — to one of its 456 participants.

According to Variety, players will attempt tasks from the show as well as new games, however the casting site guarantees that “all players will leave unscathed,” unlike Squid Game.

Casting for “Squid Game: The Challenge” is now open for applications at SquidGameCasting.com. However, while the original series was mostly a Korean-language production, Netflix is looking for participants from all around the globe who are fluent in English.

The news follows the official renewal of “Squid Game” for a second season by Netflix. The first season of the South Korean survival drama was launched in September, and it now holds the record for Netflix’s most popular series of all time, with over 1.65 billion watch hours in its first 28 days.

Speaking on the reality series, Netflix’s Vice President of unscripted and documentary series Brandon Riegg said, “Squid Game took the world by storm with Director Hwang’s captivating story and iconic imagery. We’re grateful for his support as we turn the fictional world into reality in this massive competition and social experiment. Fans of the drama series are in for a fascinating and unpredictable journey as our 456 real-world contestants navigate the biggest competition series ever, full of tension and twists, with the biggest cash prize at the end.”