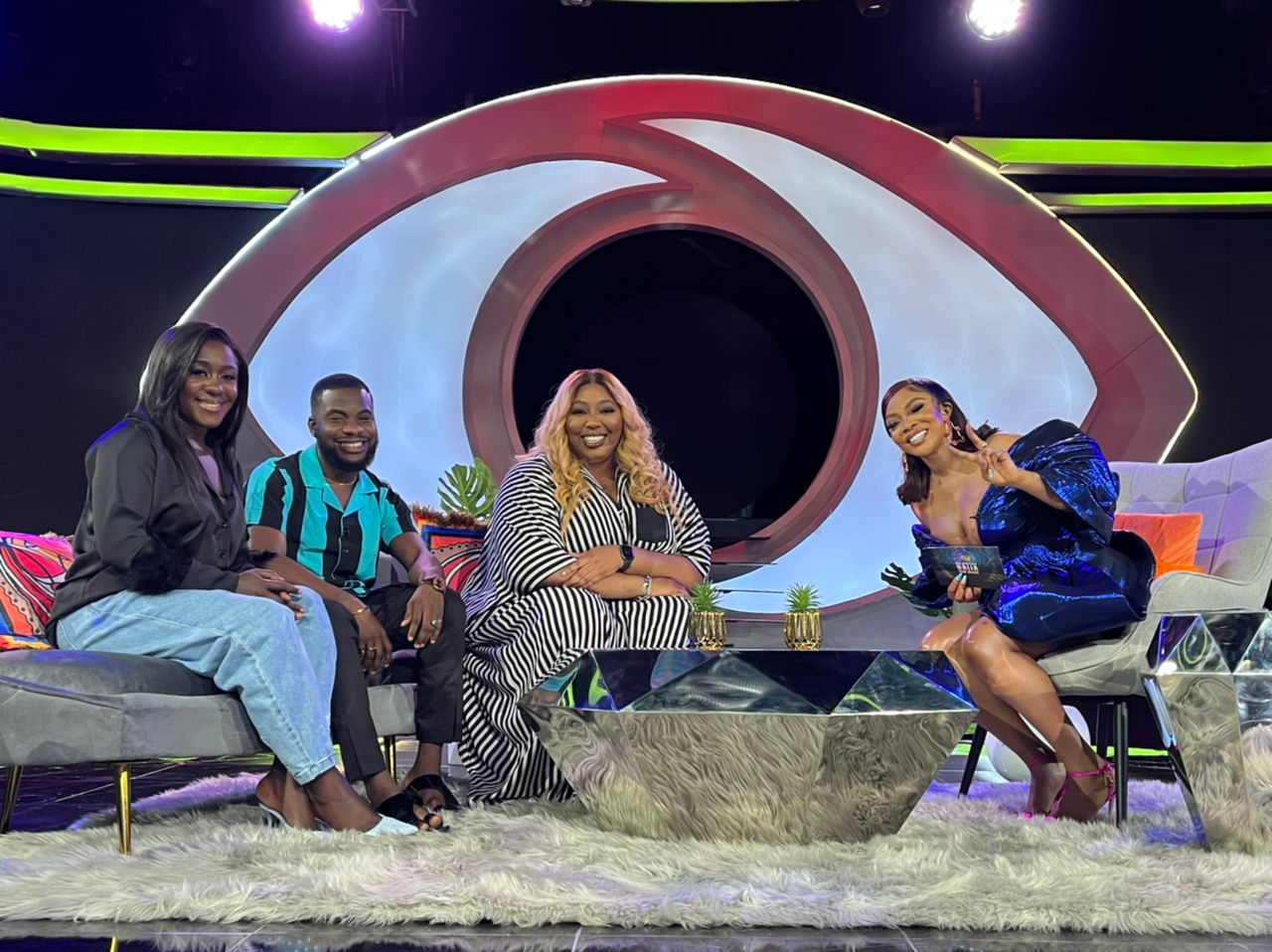 BBNaija’s most exclusive talk show, BBNaija S7: The Buzz, premiered on August 2, and it matched the Level Up housemates’ energy. The show was a vibe from the very minute it started till the last second.

The show’s host, Toke Makinwa, says fans are in for double the fun, the fights, the drama, and the romance. She was joined by content creators, Glory Elijah and Jay On Air, and lifestyle journalist and social commentator, Latasha Ngwube, as they discussed housemates, ships, fights, and some mic drop moments so far on the show.

The episode started with a quick look at the housemates and their entrances into the Big Brother house. Glory Elijah joined Toke as her first guest as they discussed first impressions. Glory mentioned that Hermes stood out to her due to his polyamorous side, which fascinated her. They also noted that the Level Up housemates are very vocal, which will lead to lots of fights this season.

Speaking of the ‘ships’ in the house and how quickly they are formed, Glory mentioned that the shippers are to be blamed as they have such a massive influence on the housemates due to their gifts and attention. The gifts and attention will make people participate and get into ships on the show regardless of whether they win or not.

Jay On Air joined the conversation about the ships; he described the situation between Bella and Sheggz as an interesting one. He sees Bella as a smart girl who wants to ensure she does not lose power in the relationship and let go of herself, hence she is not being explicitly vocal with Sheggz. This contrasts with Doyin, who specifically told Sheggz of her likeness for him but decided to stay back because of his relationship with Bella.

For Beauty and Groovy, the guests believe their relationship is exhausting and toxic as Beauty is very territorial and does not want Groovy to be with other ladies, which is such a big ask for one week.

Moving on to the tension and fights in the house, Toke and her guests reviewed the fights between ChiChi and Bella, which was the first fight of the season, and the fight between Beauty and Ilebaye, which earned Beauty her first strike on the show. Glory said Beauty went over the top with the fight and was uncontrollable, and it looked like she had a minute of madness as the cause of the fight cannot be equated to the reaction. Glory added that Bella is an alpha female who likes things to go her way.

The guests believe Biggie made a wise decision because it is more powerful and makes everyone desperate to win.

To discuss some mic drop moments in the house, Toke and her guests were joined by Latasha Ngwube to discuss Christy O and Pharmsavi’s interesting conversation, the dynamics of Hermes’ polyamorous relationship, and ChiChi’s declaration as a professional exotic dancer. Latasha wondered how the viewers would have received the polyamorous declaration from a super-rich kid as opposed to it being Hermes.

The episode ended with a conversation about the two fake housemates—Deji and Modella—Biggie introduced. Toke and her guests agreed it was a great idea and it would get interesting as the point of a fake housemate is to cause trouble and light the housemates up.

Toke promises to be back in the next episode with more drama, talking points, and a little bit of gossip.

The Buzz is exclusive to Showmax, and new episodes drop on Tuesdays and Saturdays at 7 p.m. WAT.

#CommonwealthGames2022: We’re proud of Chioma Onyekwere & Obiageri Amechi for their major win at the Discus Event