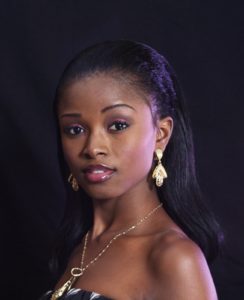 The results were surprising because wannabe fashionista Chinwe performed poorly while Shona who has been accused of ‘lacking fashion sense’ WON. The girls also enjoyed a visit from music star Banky W, Jay Jay and of course D’Banj.

Here is what Banky had to say “I think the show is a great show, I think it’s very entertaining, I’m glad I came on the show – I had a great time. And it’s good to see that the ladies are trying to make something of themselves.”

On Shona – “Shona, who is the lady that won, seems to have the strongest personality of the three, because she was really like coordinating the flow of the conversation and activities during dinner”.

On Chioma, Rekana and the rest of the girls – “Chioma still seems very timid –it’s like she’s not out of her shell yet, but Rekana was cool, in fact they are all beautiful ladies – I had a nice time –they have such pleasant personalities, really”
As Shona was the challenge winner, she got to nominate 2 kokolettes to enjoy her prize with her and she elected Rekana and Chioma to accompany her. The prize was to hangout with superstar Jay Jay Okocha. After the excitement of the reward, the next day the girls started fretting about evictions and no one could have guessed what came next!

In a surprising twist, Bidemi Jolayemi the 23 year old Olabisi Onabanjo University student was evicted from the Koko Mansion along with 21 year old musician Chioma Akuezue. Last week, Chioma was among the bottom 3 and was saved by D’Banj but this week, her luck ran out as she was evicted.  Goodbye Chioma and Bidemi!

Related Topics:koko mansion
Up Next