The 2009 edition of the Soundcity Music Video Awards (SMVA) were held on the 1st of August 2009 in Lagos, Nigeria and of course, BN was on the scene to give you the full scoop both on the red carpet and on stage! The night before, fans of Nigerian music had rocked out at the pre-awards concert the ‘Soundcity Urban Music Blast‘ so they were all hyped and ready for more on the night of the awards. 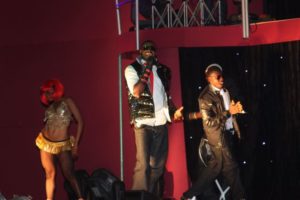 Darey Art-Alade was the host of the night. It seems as though Darey is now the popular choice to host awards show. The musician also hosted the Future Awards earlier this year.  He introduced the show and the performance  of the night was by new artiste – DIPP. He performed his smash hit ‘Dangerous’. The musician clinched his first ever major award by winning the SMVA for Best Special Effects Editing. The next performance was by Weird MC had on-stage issues mid-performance (we are guessing technical issues) but she was able to return to complete her set. Overall, she gave an energetic performance. South Africa’s Jozi who also attended the event last year – performed songs from their most recent album. Considering that the crowd was not very familiar with their music, they still managed to hold their own. Actress Mercy Johnson caused a stir especially amongst the male folk in the crowd when she got on stage to present an award with Big Brother Africa’s Uti Nwachukwu. Mercy was garbed in a skintight strapless black and leopard print mini. 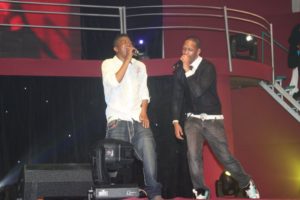 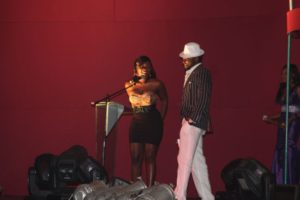 Mercy causes a stir in her mini

The performances and awards rolled on! The Mo Hits Crew thoroughly thrilled the crowd with Wande Coal, D’Banj and other members of the crew performing a medley of hits. Other highlights of the night include a rousing performance by Seun Kuti & the Egypt 80 Band, US Star MIMS‘ on stage appearance and the Eldee, Banky W, MI and WizKid performance. Overall, an absolutely thrilling night! That said, it is worth noting that the show started very late! This seems to be the bane of all Nigerian events. Hopefully a major event organized bucks this negative trend soon. Congrats to SoundCity…we’ll see how they do next year.

D'banj doing what he does best

Best R&B or Pop Video
Darey – Not the girl

Bolanle Okhiria is the KOKOLETTE