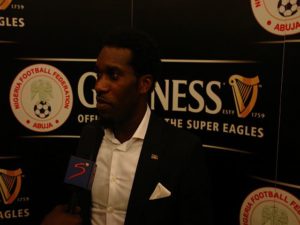 Guinness®, the Official Beer of The Super Eagles announced a Man of Greatness Award scheme to recognise the Greatness of the players during their forthcoming Africa Cup of Nations games and to inspire them to continue to Reach For Greatness throughout the tournament.

The scheme, which is part of the Guinness Power of Naija campaign, will represent the views of the nation’s football fans who are being called by Guinness to vote for players they believe demonstrate Greatness. An award will be made after every Super Eagles game and fans can show their support and vote for their player – as many times as they wish – during the match and up to 48 hours after the final whistle. Votes can be cast by:

After each match the player with the most fan votes for that match will be presented with the Award by Guinness Greatness Ambassador and former Super Eagle Man of Greatness – Jay Jay Okocha.

Adenike Adebola, Guinness Marketing Manager commented: “Through the Guinness sponsorship of the Super Eagles we are celebrating the Greatness of the players that represent our country and those around them who have inspired them to Reach For Greatness. We are confident that by uniting with the fans to recognise this Greatness we will be encouraging the team to step up and make the most of their potential during the tournament.”

Though the Power of Naija campaign, Guinness® is also demonstrating its support for the Super Eagles by encouraging all fans to stand behind the team in the belief that together 150 million fans, 11 players and 1 beer – Guinness® – can unite in the power of the Nigerian spirit.

Adenike Adebola added: “Guinness is the number one stout in Nigeria and is truly distinctive. It is a beer of substance for men of substance adored by millions here in Nigeria. It is the only beer of choice to show support for the Super Eagles and through our many football activations we will be ensuring that all football fans here in Nigeria will be able to enjoy an enhanced Guinness Greatness Football experience during CAN 2010.”

Other Guinness football activations include a national consumer promotion offering over N400 million worth of free airtime. All Guinness drinkers need to do is buy a Guinness FES or GES, check under the crown and text the unique special code to 1759. There is no limit to the number of times someone can win  the more winning codes found, the more can be won and the more Guinness drinkers can stay connected with friends and family to share football gist while enjoying a Guinness. The promotional crowns will be on the new limited edition Guinness bottle featuring the colours of the Nigerian Flag from 1st January.

During the tournament, the Guinness Football Fiesta fleet of mobile viewing vans will also be operated for the Super Eagles CAN games as well as all quarter, semi and final matches. Specially equipped with big plasma screens and sound systems they will bring together live CAN broadcasts and special commentaries as well as pre-match, half time and post match entertainment.

Related Topics:Guinnessjay jay okocha
Up Next

What’s it like to be FABULOUS, AFRICAN & BLACK? New Mag FAB launches in February