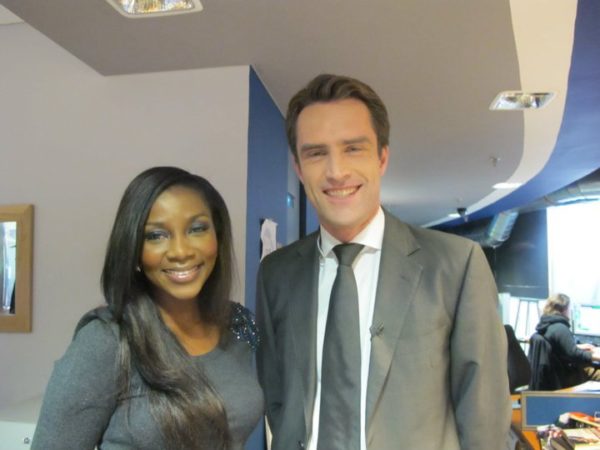 Nigerian actress Genevieve Nnaji has been chosen as a “Connector of the Day” on CNN’s programme, Connect the World. Genevieve filmed her segment yesterday, 28th October 2010 at the CNN Studios in London and viewers from around the world sent in questions via various social networking platforms. Nollywood Uncut editor, publicist and scriptwriter, Bola Aduwo was featured via telephone on CNN’s Connect the World – Brazil/Nigeria show, she maintained contact with the producers and suggested Genevieve as a “Connector of the Day” and it was done.

Connect the World takes viewers on a sweeping journey across continents, beyond headlines and into the stories that are changing our world. In the segment, Connector of the Day, viewers get a chance to connect with some of their favorite personalities by sending in their questions and having them answered. Genevieve has joined the ranks of recent “connectors” including Matt Damon, Condoleezza Rice, Roberto Cavalli, Jose Carreras, Sheryl Crow and Sean ‘Diddy’ Combs.

Though the air date is not confirmed, it will likely air during the Week of November 8th 2010.
Genevieve shared her excitement about the feature via social networking site, Twitter and also in a behind-the-scenes video which has been uploaded to the CNN Connect the World Facebook page. Also read Gene’s “Future Connector” profile on CNN.com.

Backstage at CNN Studios in London

Gene was styled by Zed Eye and her makeup  done by Stacey Okafor. Here are some more shots.

Photo Credit: CNN Connect the World via Facebook | Zed Eye
View exclusive photos of Gene getting ready for the show on NollywoodUncut.com

Related Topics:CNNgenevieve nnaji
Up Next