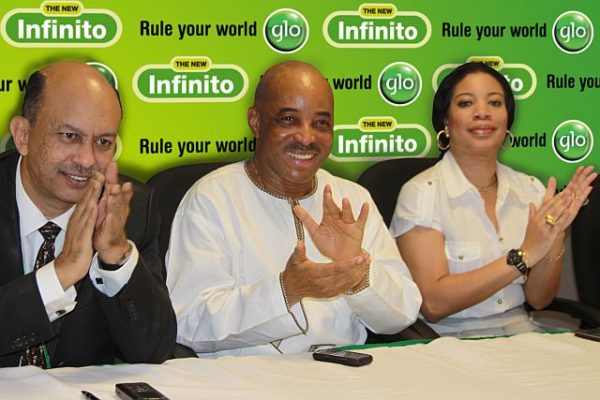 Rita Dominic, Ini Edo, Monalisa Chinda, Chioma Chukwuka-Akpotha and Uche Jombo, all Glo ambassadors, were on hand to identify with the package which charges subscribers only 25 kobo per second for calls made to any network in Nigeria. The new plan is devoid of any rental payments, hidden charges, and conditions.

It was not an entirely Nollywood gathering as the guests at the event included songstress Ego and Stereoman Ekwe.

Speaking at the event, Rita Dominic said she was thrilled that New Infinito, unlike other tariff plans in the market, charges 25 kobo per second flat rate for all local calls irrespective of which network is being called or time of day or which part of the country the call is originating from.

Ini Edo, on her part, described New Infinito as the best value offer in the country’s telecom industry. She commended Glo for introducing the package which also allows subscribers to call one Special Number at only 2 kobo per second. “It is interesting to note that no daily or monthly rental is charged to enjoy this very cheap rate,” she stated.

Glo Group Chief Operating Officer, Mohamed Jameel, who launched the product explained that subscribers have an option of registering 5 Glo numbers which he can call at 18 kobo per second. Registration is also free and there is no rental charge, he added.

The other stars at the occasion, Monalisa Chinda, Chioma Chukwuka-Akpotha, Uche Jombo, Ego and Stereoman Ekwe expressed optimism that the product will resonate well with subscribers and said they were proud to associate with Glo.