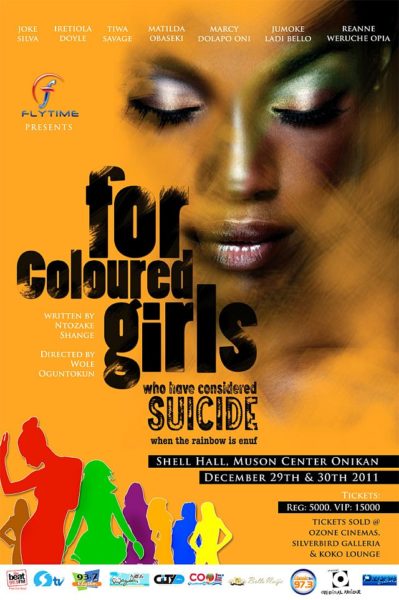 Nigeria’s premier entertainment solutions provider Flytime Promotions has teamed up with award wining Nigerian playwright and stage director Wole Oguntokun to bring to the Nigerian stage the critically acclaimed play “For Coloured Girls Who Have Considered Suicide/When The Rainbow is Enuf”. The multi-award winning play written by Ntozake Shange will be performed live on stage December 29th & 30th at the Shell Hall, Muson Center, Onikan Lagos.

For Coloured Girls depicts the interconnected lives of seven women, exploring their stories and struggles as black women in America. The play has been performed on Broadway, adapted as a novel, television series, and most recently as the movie ”For Coloured Girls” written, produced and directed by award winning producer/director Tyler Perry.

Now adapted for the Nigerian audience, the play features the all-star female cast of Joke Silva, Ireti Doyle, Matilda Obaseki, Marcy Dolapo Oni, Tiwa Savage, Reanne Weruche Opia and Olajumoke Ladi Bello. The Nigerian adaptation while remaining true to the original play will be a poetic exploration of what it means to be an African woman living in the 21st century.

Commenting on the social relevance of the play, producer Keke Hammond said: “This play presents an opportunity for the Nigerian woman to see her struggles through the lives of other women and also to birth a conviction within her to stand up for their rights. This year has been a trying one for the Nigerian woman, with many tragic stories becoming more prevalent. With this play, we want to evoke COURAGE in the Nigerian woman. Entertainment isn’t just music and comedy, it is art, it is life; it is interesting, while sending a strong positive message to women.”

For Coloured Girls has been lauded by many critics for the dialogue it fosters in its audiences long after the curtains are drawn and the lights are dimmed. In Nigerian society, issues of rape, homosexuality, abortion, physical and sexual abuse are generally considered taboo. As a result, thousands of Nigerian women –our mothers, our aunts, our sisters, our friends, our wives—have to bear this pain and shame on their own. For Coloured Girls raises questions and conversations surrounding these issues and womanhood in general in the hopes that subjects that are often swept under the carpet are confronted; strength is invited and healing can begin.