According to Mfonobong Nsehe, a Forbes Magazine contributor who compiled the list, it consists of a handful of young Africans in their 20s and 30s who have built businesses and amassed enviable million-dollar fortunes. While some are corporate animals; others are empire builders.

There are thousands of young and immensely successful entrepreneurs across the African continent. There’s a growing number of Africans aged 40 and under who are legitimately amassing multi-million dollar fortunes. They don’t inherit stuff; they build it themselves.

Here’s what Forbes had to say about the two Nigerians on the list: 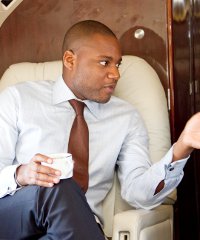 Ladi Delano
The jet-setting Nigerian serial entrepreneur made his first millions as a liquor entrepreneur while living in China. In 2004, at age 22, he founded Solidarnosc Asia, a Chinese alcoholic beverage company that made Solid XS, a premium brand of vodka. Solid XS went on to achieve over 50% market share in China and was distributed across over 30 cities in China, and pulled in $20 million in annual revenue. Delano subsequently sold the company to a rival liquor company for over $15 million and ploughed his funds into his next venture-The Delano Reid Group, a real estate investment holding company focused on mainland China. Today, Delano is the co-founder and Chief Executive Officer of Bakrie Delano Africa (BDA) – a $1 billion joint venture with the $15 billion (market cap) Bakrie Group of Indonesia. Bakrie Delano Africa serves as the investment partner of the Bakrie Group in Nigeria. The Indonesian conglomerate has provided over $900 million worth of funds to invest in Nigeria and Bakrie Delano Africa is responsible for identifying investment opportunities in mining, agriculture and oil & gas and executing them.

Jason Njoku
The maverick Nigerian Internet entrepreneur is founder of Iroko TV, the world’s largest digital distributor of African movies. Iroko TV has been dubbed the ‘Netflix of Africa’. Earlier this year, Iroko TV raised $8 million in venture capital from Tiger Global Management, a New York-based private equity and hedge fund run by billionaire Chase Coleman. IrokoTV enjoys lucrative content distribution deals with Dailymotion, iTunes, Amazon and Vimeo. Njoku is unwilling to divulge figures, but analysts believe IrokoTV could be worth as much as $30 million. Njoku is the company’s largest individual shareholder.

Only two woman made the list, Magatte Wade of Adina World Beat Beverages & Tiossan and Yolanda Cuba. Yolanda was 29 when she was appointed CEO of Mvelaphanda Holdings, a Johannesburg Stock Exchange-listed investment holding company.

What do you think about the entire list and the Nigerians that made it on the list?

What Do You Think About the Appointment of Nigeria’s First Lady, Patience Jonathan as a Permanent Secretary in Bayelsa State?