With the nominees for the first-ever AfricaMagic Viewers’ Choice Awards (AMVCAs) just days away from being announced, today marked another highlight for the film and TV initiative as it revealed a sneak peek of the elegant trophy designed especially for the prestigious event. 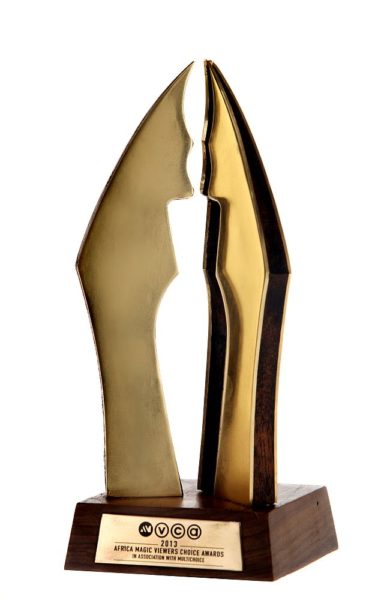 Merging the timeless potential of wood with the age old strength of bronze, the trophy is a curving sculpture of fluid lines that symbolizes movement while retaining a simple shape and a solid structure.

Mounted on a base of glossy mahogany, three separate polished blades, colored a warm glittering gold, converge and in doing so reveal the subtle silhouette of a woman. This feminine figure at the heart of it all has, in many ways, quietly become an enduring image of the AfricaMagic brand as it has evolved over the past decade.

With the blades representing the three key elements of African storytelling (place, personality and passion), the overall significance of the trophy is enhanced. And fittingly, the triple blade design also speaks to the three dimensional identity of the AfricaMagic brand – programming made in Africa, by Africa for Africa.

An original creation, it is hoped that the AMVCA trophy will speak to both industry professionals and television audiences says Biola Alabi, M-Net Africa MD.

“Internationally there are certain iconic entertainment trophies that carry the same weight with winners and audiences, loved both for its physical form and its emotional meaning. We hope that our trophy will do the same – be a statuette that motivates filmmakers and TV professionals while also inspiring those still to join their ranks and captivating those who watch at home.”

The AfricaMagic Viewers’ Choice Awards are being held in association with MultiChoice and are sponsored by Nigeria’s number 1 low sugar malt drink, Amstel Malta. Nominees for the first ever AMVCA’s will be announced during a special hour-long edition of lifestyle series 53 Extra on Monday January 28 2013 at 21:00 CAT.

For more awards info, visit www.africamagic.tv. Winners of the 2013 AfricaMagic Viewers’ Choice Awards will be announced during two gala ceremonies in Lagos on March 8 and 9 2013.