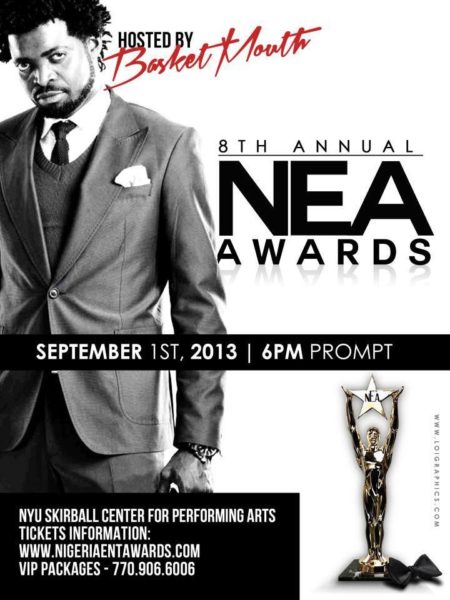 The Nigeria Entertainment Awards (NEA) is a few weeks away and all the nominees, members of the entertainment industry and the fans are looking forward to a great night of celebration anchored by a great host.

It is with great excitement that the producers announce that the host of the 8th annual Nigeria Entertainment Awards is non-other than comedian Bright ‘BasketMouth’ Okpocha. BasketMouth is a well-known comedian who has won numerous awards and hosted lots of shows. The comedian who recently concluded a US Tour titled Basketmouth Uncensored, is honored to be hosting the NEAs, and looks forward to a wonderful event that supports the industry.

The awards are scheduled to take place on Sunday 1st September 2013, at the NYU Skirball Performing Art Center in New York City. So far the line up of confirmed artists, actors, actresses and entertainers expected to attend include; Timaya, Wande Coal, Davido, Omawumi, Sean Tizzle, KCee, Iyanya, Chidinma, Burna Boy, Jaywon, Olamide, Denrele Edun and Bovi amongst others. Representing Nollywood are Rita Dominic, Funke Akindele, Ramsey Nouah, Uti, Ali Nuhu and OC Ukeje. With more names being confirmed and added to the list, this year’s award show is on track to be another fun-filled, star-studded show for the records.

Red carpet begins at 5PM, and the award show begins at 6PM prompt. To avoid last minute bookings, all attendees are encouraged to get their tickets as soon as possible on the website: www.nigeriaentawards.com and to arrive on time. The NEA Awards is sponsored and supported by BellaNaija, Arik Air, CoolFM, MTech, BeatFM, YSGHubs, Mayven PR, 360Nobs, Jaguda, Firematic, and a host of others. The producers are thankful to all current sponsors and partners, and will in the coming weeks unveil more details for the pre-events leading up to the awards.

Get Set for a Month of Breathtaking & Fabulous Weddings! BellaNaija at 7 presents BN Spectacular Weddings