BN Prose - Book Excerpt: Honour Among All by Vivian Kay 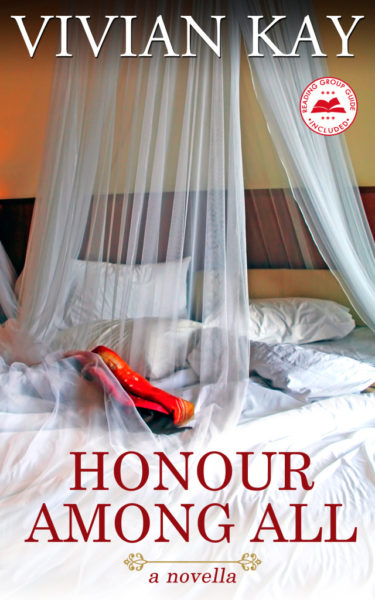 Yanked from a pleasant dream by the shrill sound of the alarm clock buzzer, Moni fought hard against opening her eyes. She would rather stay in bed all day.
Losing what had become a daily battle, she stretched her limbs, flinging aside the heavy down duvet.
Ladi grunted when the duvet landed on his face. “Watch it,” he mumbled.
“Good morning to you, too, Mister Sunshine,” Moni muttered under her breath, swinging her feet off the bed. Ladi was most likely still angry over the previous night’s argument. Too bad.
Moni, a soft answer turns away wrath.
Ignoring the familiar quiet voice, she reached for her night robe. After she’d showered, dressed and downed two cups of sweetened black coffee, Ladi came downstairs.
Without saying a word to her, he poured himself a bowl of cereal and sat at the kitchen table. From the way Ladi stared into his bowl with creased brows, it was as if he were waiting for the milk to part and expose one of life’s great mysteries.
Moni rolled her eyes. To think she had once found his brooding personality attractive.
A glance at the kitchen clock reminded her it was time to leave. With an important business meeting taking place first thing that morning, it wasn’t the day to be late. But Miss Shekinah had yet to make an appearance.
Tapping a foot on the cool porcelain tile, she stood at the bottom of the stairs. “Shekinah Ogooluwa Badmus! Don’t make me come upstairs!”
Five minutes later, she was still waiting.
Lord, what am I going to do with this child?
Her chest heaving, Moni’s voice rose with each syllable. “If you are not down here before I walk out of the door; you will not be attending your friend’s party on Saturday!”
She finally heard a bedroom door bang shut.
Dressed in the too-tight camouflage pants she was supposed to add to the Goodwill pile, Shekinah came bouncing down the stairs. With long gold braids piled on top of her head, untied high-top sneaker laces trailing behind her, she certainly didn’t look like she was dressed for school.
Shekinah had inherited Ladi’s tall, lean figure. Since she was only five feet two, as Shekinah walked around her, Moni was forced to look up.
Her blood pressure shot right up when she saw Shekinah’s heavy kohl lined eyes and bright red lips. She’d just had a talk with Miss 15 going on 30 about not wearing heavy makeup to school.
Walking to the fridge, Shekinah beamed at her father. “Good morning, Dad,” she said.
Ladi returned her smile. “Good morning, princess. How was your sleep?”
Shekinah grimaced. “Meh,” she said with a shrug. “I didn’t get enough.”
“Then, it’s a good thing you can sleep in tomorrow,” Ladi said in a soothing tone.
Moni rolled her eyes. Cry me a river. Shekinah had probably stayed up late surfing the internet even though she knew it was a school night. “Shekinah, are you now too grown to say good morning to your mother?” she asked.
Ignoring her, Shekinah opened the fridge and removed items for her school lunch sandwich.
“I’m talking to you!” Shekinah kept quiet. Trembling, she turned to Ladi. “You’re not going to say anything to her?”
“Moni, please don’t drag me into the mess you created,” Ladi said. “Why should Shekinah say anything to you when you started her day by yelling at her?”
The words stung. “Really? Well, I guess you’ll be taking her to school then,” she said.
Ladi sighed. “I really don’t want to deal with your passive-aggressive behaviour right now.” He turned to Shekinah. “Princess, please greet your mother so we can have some peace.”
“Good morning, Mother,” Shekinah said in a sweet tone without looking up from piling globs of mayo on a slice of rye bread. When she was done, Shekinah gave her a dazzling smile and an, ‘I dare you to send me back up to wash my face when we only have five more minutes to get to school’ look before walking out of the house.
Her mouth open, Moni stared at the slammed door.
What had happened to the precious child she’d fasted and prayed years for? It was as if someone broke into their home, stole her real daughter and left this angry, defiant teenager at their doorstep.
Heading out of the house, she heard Ladi’s voice. “Have a great day,” he said.
The words triggered an internal combustion inside Moni and her frustration turned into anger. As far as she was concerned, Ladi was responsible for Shekinah’s spoiled attitude. Their inability to agree on parenting rules was a huge part of the problem.
“Sure, dear,” she said in a syrupy tone. “After such a perfect morning, I guess it’s not far-fetched to expect the rest of my day will go great.”
She slammed the door behind her. She knew it was juvenile behaviour but it still felt good. Taking a deep breath, she tightened her grip on her briefcase and hurried towards their mini-van.
_____________________________________________________________________________________________________
Vivian Kay is a debut Christian author weaving stories in Canada’s banana belt. When she is not writing or daydreaming about writing, she’s cooking, playing Scrabble or snuggling up with a good book. Vivian loves to hear from her readers so please stop by at http://viviankay.wordpress.com/ . Honour Among All can be bought here on Amazon