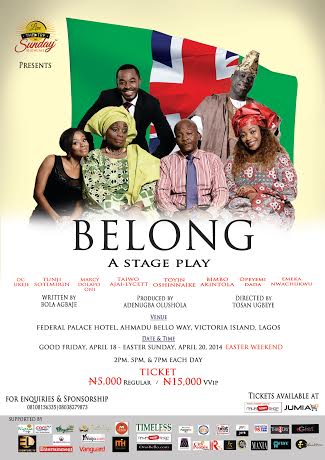 Written by Bola Agbaje, Belong is a light comedy about identity and stations in life. The drama starts out in the London with Kayode (Toyin Oshinnaike) and Rita (Dolapo Oni). The couple are at a low point after moody Kayode has failed in his attempts to achieve election to Parliament after an embarrassing Twitter episode, a theatrical first that will assuredly not be a last.

As if the depression isn’t enough for a man who has sacrificed his career to misguided allegations about the racism of his equally Black political opponent, along comes Bimbo Akintola’s Fola, the first of a pair of truly overpowering Nigerian women. Her job is to sell the country to émigrés and persuade them to come back “home”. And she carries it out with the kind of fearsome relish that makes refusal almost impossible.

Against his wife’s wishes, Kayode decides to take a reflective break to visit his Mother, Mama, portrayed by Taiwo Ajayi-Lycett. Mama has semi-adopted a former “area boy” Kunle played by OC Ukeje , and is trying to turn him into a local politician with a brief to modernize and remove corruption.

Sounds exciting right? Be sure to attend and make this Easter one to remember.

Ticket Prices
Standard/Regular: N5000
VVIP: N15,000
Tickets are sold on Jumia.com and Naijaticketshop.com and has sales points at Silverbird Galleria and Ozone Cinemas.

Move Back To Nigeria: “Keep Your Cool & Keep On Trucking!” Studio53 Extra Co-Presenter, Ozzy Agu Tells His Move Back Story