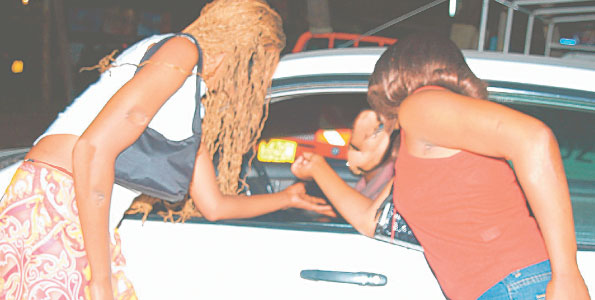 Since the Ebola outbreak, a lot of business owners including bush meat sellers have been open about a massive decline in sales.

Reporters at The Sun visited about six brothels in Ado Ekiti, Ekiti to interview commercial sex workers about how their business has been affected amidst the Ebola outbreak.

A good number of the ladies stated that men in Lagos are more financially generous, but because there are more cases of the virus in the city, they are refusing them, while the men in Ado Ekiti do not give much.

They say it has greatly affected their daily income.

A woman who goes by the name Lovie Baby from Akwa Ibom says she now runs away from customers from Lagos. “Bros, dis life no too sweet o, but no one wants to die. Nowadays, if any man comes to meet me and says he is from Lagos, I will run o! Because I don’t want to get that Ebola virus o!”, she said.

Chichi, student at a tertiary institution in Kano, says she came from Kano where she resides with her parents to do some “runs” with her friends and sisters in Ado Ekiti.

The undergrad who revealed that her school is currently on strike, said her sisters and friends have warned her to stop attending to men from Lagos.

“Although I know that men from Lagos pay good money for sex, my people here have warned me not to let them touch me, let alone ‘do business’ with me. I don’t want to die now, so I am not attending to any Lagos man now. I prefer the local people.

When Ebola is no more, then we can start thinking of playing with men from Lagos.” she adds.

Another commercial sex worker Joy from Benin, Edo, said she actually thought of leaving Ekiti for Lagos to get more clients but she changed her mind for fear of contracting the disease.

“You see, I wanted to leave this place for Lagos but this Ebola problem is causing me to have a change of mind. I am really suffering here because of that. But I have recently been turning down requests for visits to Lagos by my clients there because you don’t know who has it and who doesn’t, since they say mere kissing or body contact transmits the disease.”

Joy advised that it is better for all of them to steer clear of men from Lagos, “How do you determine a man that is suffering from Ebola? My brother, it’s better to keep away from any man you know is from Lagos, at least, for now.”