#CHOAMVASuperFan: WIN an All Expense Paid Trip with a Friend to the Channel O Africa Music Awards in SA 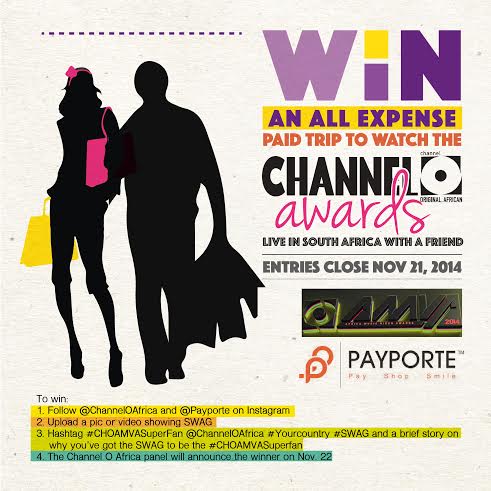 Wanna fly to South Africa as a VVIP for the Channel O Africa Music Video Awards 2014?

It’s a VVIP affair for a lucky fan and a friend as one of Africa’s biggest music channels – Channel O Africa searches for a Superfan who will win an all-expense paid trip to South Africa for the Awards on Saturday 29th November 2014. The winner also gets to attend the Awards with a friend and take home shopping money and vouchers from Payporte.

“The dream of one lucky fan is about to come true, ” remarked Leslie Kasumba (Head Channel O Africa). “The #CHOAMVASuperfan is about rewarding our most loyal fans online with the support of our Afro pop category sponsor Payporte”.

The #CHOAMVASuperfan contest will be taking place on the official Channel O Africa Instagram page @ChannelOAfrica where the first follower to answer all the questions correctly becomes the Superfan. A winner will be announced on Friday 22nd November 2014.

The 11th Annual Channel O Africa Music Video Awards will take place at Nasrec in Johannesburg, South Africa. It will be broadcast live on channel 320 at 8PM C.A.T

It’s The Rebirth! Join Bheerhugz Cafe as they Re-Open their Inner Lounge this Friday at Ikeja City Mall