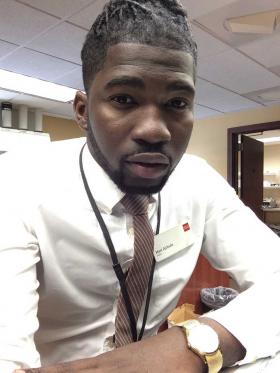 Two Sheriff’s deputies in Savannah, Georgia have been placed on administrative leave with pay for “inappropriate actions” due to the death of 22-year-old Nigerian student, Matthew Ajibade, who died in their custody.

According to Savannah Morning News, Ajibade who suffered from bipolar disorder, died in the isolation cell of a Savannah county jail.

He had been arrested for battery after the police were called over a domestic incident.

Local news reports state that it was Ajibade’s girlfriend who called the police, and when they arrived; she told them he needed to go to the hospital. However, a preliminary incident report on the arrest states that neither Ajibade nor his girlfriend requested to be taken to the hospital.

When officers arrived at the scene, Ajibade was said to be standing with his girlfriend, and holding her tightly. They both had a blanket over their heads.

The girlfriend subsequently removed the blanket when authorities arrived, and when she did so, her face appeared to be bruised and her nose was bleeding, police allege.

The police report also states that when an officer tried to pull them apart, Ajibade “started to resist apprehension in a violent manner, and was taken to the ground, so that he could be handcuffed.”

Ajibade’s girlfriend reportedly informed police of his medical condition, handing them a bottle labeled Divalproex, that contained pills. The drug is usually used to treat certain types of bipolar disorder or seizures.

Authorities say he was placed in an isolation cell because “he became combative with deputies while being booked and his behavior was deemed dangerous.”

Ajibade eventually died in the cell.

His family is demanding answers, and insists that he should have been taken to the hospital instead of jail.

An investigation into the cause of his death is currently ongoing.

Ajibade who studied film at the Savannah College of Art and Design before deciding on computer science and switching to Savannah Technical College, was born in Lagos, Nigeria.

“Matthew was going places, and they were good places,” O’Mara said. “And we need to know why he’s never going to get there,” says his brother, Chris Oladapo.

“It is a Day for Showing Love…It Will Discourage Violence” – INEC on 2015 Elections Feb. 14th Date