Amber Rose opens up on her Twitter Feud with Khloe Kardashian, ‘She Didn’t have to Tweet 11 Times and try to Humiliate Me’ 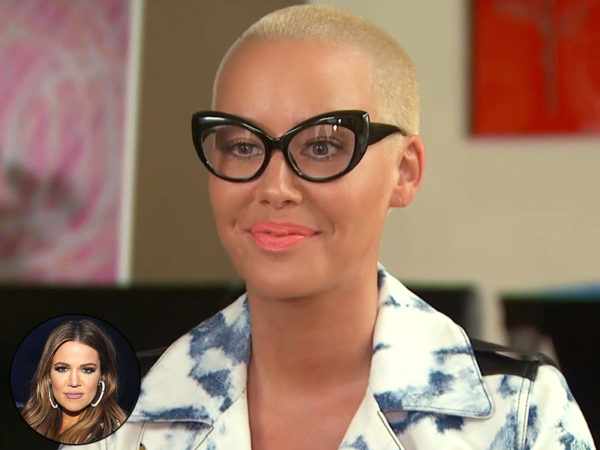 Amber Rose and Khloe Kardashian sure got everybody talking when they had their Twitter fight a few weeks ago.

Now in an interview with Entertainment Tonight, Amber Rose has opened up about it, saying that she really could have minded her business but that Khloe Kardashian didn’t have to try to humiliate her via social media.

She also addresses Kanye West saying that he had to take 30 showers after being with her.

Amber Rose talks about being ‘slut shamed’ on social media.

See excerpts from her interview below:

On Khloe Kardashian Feud:  ‘I don’t hate Khloe. I don’t hate her. I could have totally minded my own business when it came to her sister. But, me, being a dancer at such a young age, dealing with older men gave me the humility and knowledge to speak on such a subject. [But] I can understand why it came across the wrong way to her. I get it. But, that’s a phone call she could have had with me … She didn’t have to tweet 11 times and try to humiliate me.’

On Kanye West: ‘We were happy when we were together! And now all of the sudden, I’m getting slut-shamed because we’re not together anymore and it’s not fair.’ ‘I deal with it every day. I deal with it via social media. People out on the street. They don’t quite understand why I post what I post and how I speak on social media.’ ‘I’m sick of it and I’m here for my girls and we’re gonna do the Amber Rose Slut Walk this summer and it’s gonna be awesome.’

On Kim Kardashian: The only reason why these girls have careers is because their older sister had a little fun on tape. Let’s be realistic. Which I never ever hated on. I’m all for a woman making something out of nothing. You know what I mean? If you can do something and bring your entire family on and make millions of dollars, that’s dope to me. I love that.’

Rukky Sanda Shares a Message for her Instagram Critics, ‘If You Choose To Be Fat + Ugly + Unhealthy & Miserable, Well Don’t Blame Me’