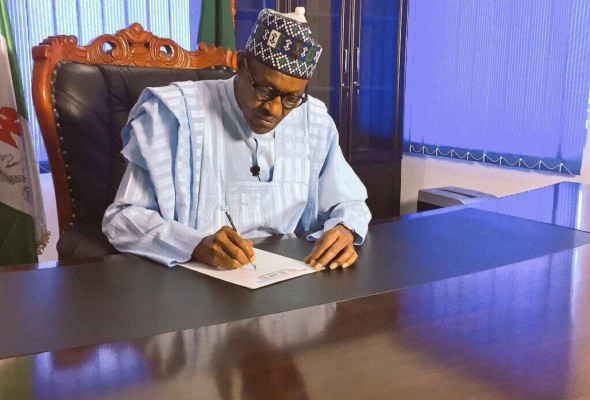 General Muhammadu Buhari has just been elected to be president of Nigeria, Africa’s most populous nation.

This is an historical event for so many reasons:

It is the first time an incumbent Nigerian president will be defeated in an election. The 2015 elections is perhaps the fiercest political contest ever witnessed in Nigeria, with many “analysts” predicting that Nigeria will not survive the 2015 elections.

For the first time, majority of Nigerians were united in their desire to put someone they had rejected not once or twice, but thrice into power.
However, I believe we can learn a lot more than political lessons from Buhari’s victory at the polls.

There are several essential business lessons you can learn from Buhari, and 5 of these lessons can make or break you as an entrepreneur.

Here are the lessons:

Don’t Ever Give Up
This is the fourth time Buhari will be contesting to be president.

Think about it. How will you feel if you went for a public debate and had to be judged by dozens of people; will you continue if you lost not just once or twice, but thrice?

Buhari contested in front of over 100 million Nigerians, and he lost thrice but he DIDN’T give up.

He could have given up after his first attempt in 2003, or his second attempt in 2007, or his third attempt in 2011 but he didn’t. Today, he has been elected as the president of the biggest economy in Africa.

Research has shown that 5 out of 10 businesses fail within 5 years of being started.

Just because your business idea or attempt at achieving something has failed doesn’t mean you should give up.

Unfortunately, unlike Buhari, you might have to try a lot more than 4 times. Even if it is 40 times, or 400 times, make sure you don’t give up.

Let’s face it, a lot of people were not happy with Buhari’s approach to government when he became Military head of state in 1983.

He has been criticized several times, with countless people telling him that he has no right to contest because of his past records. Several groups have even demanded an apology from him.

None of this matters, though, and as Buhari said, he can’t change the past but he can work on making the future better.

It doesn’t matter where you find yourself or what your past is; the past is the past, and what is most important is what you are willing to do NOW, and how you plan to approach the future.

You Need a Thick Skin to Succeed in Business
Think about it, what can be said that hasn’t already been said about Buhari?

People abused and insulted him in regards to his certificate, they said he was afraid and that was why he couldn’t participate in a debate and they tried to use his past to manipulate him.

None of that matters, though, and Buhari won’t let that get in his way. To succeed in business, you NEED to have thick skin.

At a point people will find something to use against to, no matter how ridiculous. Some will insult and ridicule you, but you have to endure.

Think about it, Buhari graduated from military college, took several courses abroad and became military head of state; he successfully contested thrice following due process, so why bring out the issue of certificate now of all time? It doesn’t matter whether what is being used against you is right or not, what matters is that you don’t let it break you. You NEED thick skin to succeed in business; this is not optional, it is critically essential.

Your Reputation is an Asset, Guard it With Your Life
If there’s one thing that was the turning point for Buhari this time around, it is his reputation.

Let’s face it, Goodluck Jonathan is one very strong opponent and even with majority of the populace thinking he would suffer worse defeat in this presidential election, he won over 40% of the votes which is impressive.

Buhari won against Goodluck Jonathan, despite all odds, not because of the people he surrounded himself with but mainly because of the reputation he has built over the years.

When you think about government in Nigeria, you think about corruption and profligacy until you get to Buhari; he doesn’t only have a reputation for not being corrupt, but he is widely known not to condone it.

If there’s one thing that convinced a lot of people to vote Buhari this time around, especially people in the regions that did not support his prior bids, it is his reputation for taking a strong stance against corruption.

The same rule applies for success as an entrepreneur.

For the most part, it might seems like it doesn’t matter but, when it really comes to it, the reputation you have built could make a whole lot of difference.

Also, according to Law #5 in Robert Green’s 48 Laws of Power, “So Much Depends on Reputation – Guard it with your Life“.

When campaigning for the presidential elections became really hot, the opposition would have used any available evidence to smear the person of Buhari but there was nothing substantial that can be used to smear his reputation for being against corruption.

Once your reputation has been built, be sure to protect it.

It is Never too Late
We hear it all the time “it’s too late”.
If you ask a 45 year old lady why she hasn’t started a business, you’ll probably hear her say “it’s already too late” or “I am too old”.

Often, you will even find people in their twenties and thirties complain that it is too late to pursue some entrepreneurial ambition or life dream.

No, it is NEVER too late.

If Buhari became president at 72, after trying 4 different times and waiting for at least 12 years, then it is never too late for you.

Related Topics:Bamidele OnibalusiEntrepreneurLessons to Be Learnt From Buhari
Up Next

Bamidele Onibalusi is a Nigerian blogger and entrepreneur, as well as the founder of Effective Business Ideas, a blog that shares practical business ideas. He has been featured in Forbes, Huffington Post, as well as in several publications locally and internationally. You can follow him on Twitter via @youngprepro.