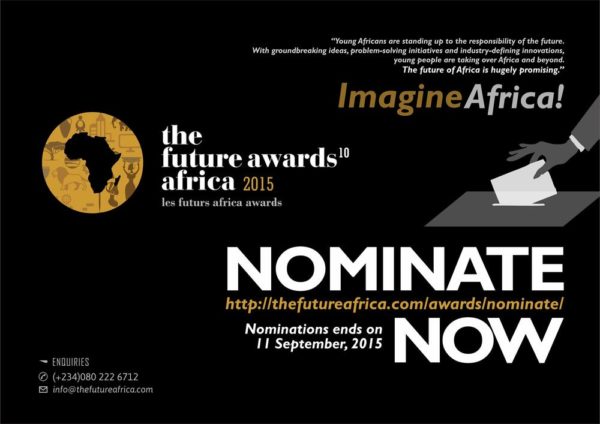 The 2015 season of The Future Awards Africa (TFAA) is nearly here!

The courtesy visits also announced the commencement of nominations for the 10th annual TFAA. The awards are seeking nominations from the public, for individuals between the ages of 18 and 31 who have created incredible impact and well documented accomplishments within their community and/or globally in the last year. These achievements should revolve around their results, potential for growth plus the ability to inspire other young people in Africans.

The theme for this 10th anniversary is Imagine Africa! This was chosen to highlight young Africans fulfilling the promise of the continent. TFAA is proud to demonstrate the richness and variety of positive change catalysed by these young ideas.

“Locally and globally, young Africans continue to reshape and redefine the narrative of just what it means to be a young individual in a developing country,” said Mfon Ekpo, Executive Director, The Future Project Africa. “They are demonstrating incredible resilience and resourcefulness, and in doing so are reshaping a continent and helping to create brighter futures for a continent of over one billion people. It really is an exciting time for us as we highlight the incredible things occurring.“

Check out the award categories for 2015 below!

For more information and to nominate a candidate, SMS +2348022226712, email [email protected] or visit www.thefutureafrica.com/awards.

Ladies, Come get a Makeover in Unilag this July!