House On The Rock & the US Embassy premiere Paramount Pictures’ 'Captive' to A-list Celebs & the General Public in Lagos | Thursday, October 1st 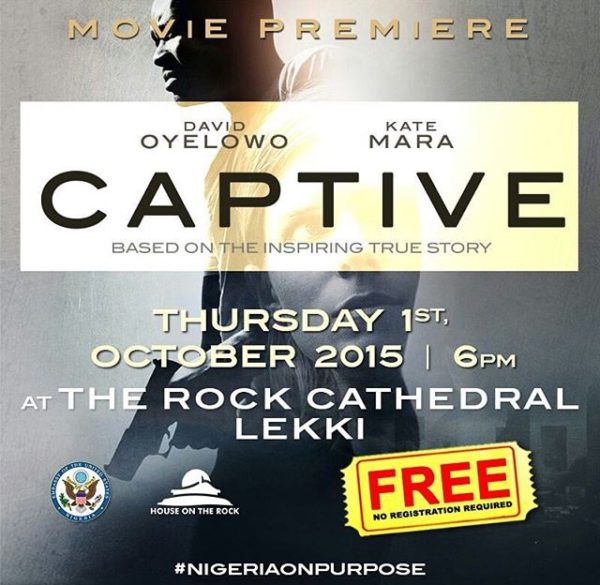 Arrangements have been completed by one of Africa’s fast-growing metropolitan church, House on the Rock, in partnership with the United States Consulate General, Lagos to screen for the first time in Nigeria, the all-new 2015 movie, Captive distributed by top global production company, Paramount Pictures at the Rock Cathedral, on Thursday, October 1, 2015.

The screening of Captive, which coincides with the celebrations of Nigeria’s 55th Independence Day anniversary, is aimed at further promoting peace, nation building and the development of minds and purpose towards achieving the Nigeria of our dreams.

The film medium has been deployed effectively by House on The Rock to promote orderliness, tranquility and purposeful leadership in Nigeria.

“At House On The Rock, we will continue to innovate and seek mediums to spread the gospel of faith in unconventional ways to inspire both the churched and unchurched people in the world“, commented senior pastor, Paul Adefarasin.

The star-studded thriller is based on the true-life story of Brian Nichols who famously broke out of prison in 2005 and went on a killing spree. This film, however, is more about the relationship he developed with one of his kidnapped victims and the road to redemption.

Captive is live on all Social Media platforms with activities such as tweetchats with select public figures and celebrities taking place daily. Follow the conversation using #NigeriaOnPurpose.