A Chef & Musician, Meet Davies Obiekea - Winner Knorr Taste Quest Season 3, Who Learned How to Cook from his Mum! 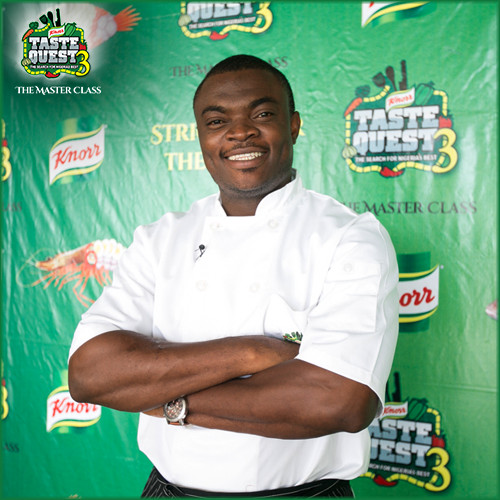 It was a war of aprons and knives at the Grand Finale of the Knorr Taste Quest MasterClass Season 3, as five remarkable home cooks battled it out in the kitchen to win 5 million Naira to be crowned Nigeria’s Culinary Best.

Davies Obiekea emerged the winner with a show-stealing dish of warm healthy salad with apple vinaigrette and deep fried chicken, which won the heart of judges and most of all, the bragging rights as Nigeria’s Culinary Best.

Obiekea, is the first of four boys from Okpanam in Delta State. A graduate of Library and Information Science from Delta State University in 2005. He is an actor, rapper and compere. He also does video and radio production.  And now, added to his cap is Nigeria’s best cook via the Knorr Taste Quest platform.

Davies has quite the modest of backgrounds with a strong belief in God. “Seeing as I have quite the staunch Catholic for a Mum“, he said.

“She, Mrs Ngbafor (as I fondly call her, hoping she won’t knock me on the head) was very instrumental to my kitchen exploits. She could really cook! In my formative years though, cooking was more of an obligation seeing as my mum bore no girls. For me this sucked plenty. Little did I know what was in store for me“. Davies added.

In 2010 and 2013, Obiekea released singles on radio titled “No contest” and “Nobody pass me” respectively. The latter gained quite the followership. In between he directed a TV series titled “Huzzle“. I thought finally, I would be heard. However, dwindling finances kept me from promoting my singles and “Huzzle” stopped airing, Davies shared.

“Be that as it may, in 2015, I participated in the Knorr Taste Quest cooking competition and by God’s grace won. It would still be this cooking that I dreaded and always complained about when my Mum would call me to the kitchen that panned out. I still am an entertainment head, but, cooking too is entertainment“. Obiekea concluded.

For those who missed the entire season, it’s not too late, click here to watch episode one to the grand finale episode thirteen: http://goo.gl/SME900

And if you were an ardent follower, spot your favorite contestants in the making of KTQ3 below:

Too Much or Too Cute? American Bride & Her Bridesmaids’ Sexy Wedding Dance for her Groom