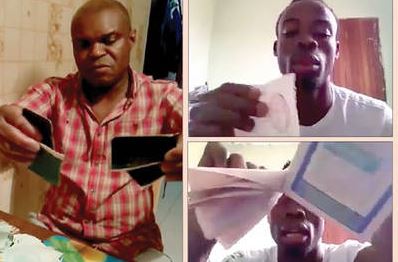 Ever since the arrest of Radio Biafra director, Nnamdi Kanu, pro-Biafra sentiments appear to be on the rise.

Just last week, it was reported that numerous people in Anambra and Port Harcourt took to the streets to protest Kanu’s arrest. Some were subsequently arrested and charged with treason.

And now, according to Sahara Reporters, some Biafra secessionists took to YouTube to post videos of themselves tearing their Nigerian passports.

Due to the incendiary nature of some of the dialogue in the videos, BellaNaija will not be posting them.

However, here are a few excerpts from one of the individuals, Emenike Michael Nwofor:

Videos of two other individuals tearing their passports and speaking against the Nigerian government have also emerged.

“There is a new Act called the Immigration Act 2015 which stipulates the punishment for any alteration or destruction of Nigerian passport; it is a jail term with conditions. Those who mentioned their names, if we find out that they tore their passports, will be taken to court. A process has to be followed.”

Dele Momodu on Amaechi: “Our Relationship was that of Mutual Love at First Sight”