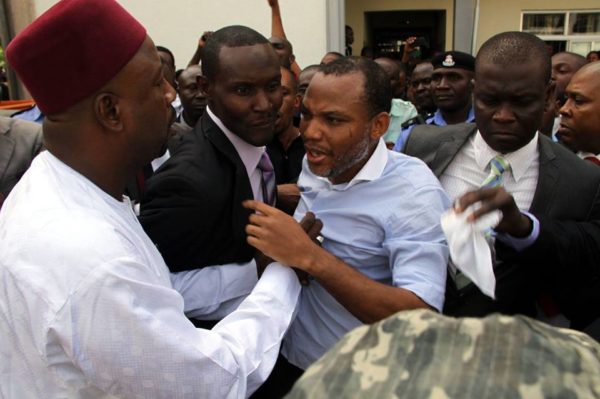 Following Radio Biafra director, Nnamdi Kanu’s appearance at an Abuja Magistrate Court on Monday and the pro-Biafra protests that took place in Abuja afterwards, activists under the umbrella of Indigenous People of Biafra (IPOB) have vowed to storm Lagos.

You will recall that following a court order instructing Department of State Services (DSS) to release Kanu from detention for arraignment, he was finally arraigned on Monday, in an Abuja Magistrate Court.

Some IPOB members who post via the Radio Biafra Facebook page put out a notice stating that Lagos would be the next scene for pro-Biafra protests.

The notice reads in part:

Every body should get ready for another ALMIGHTY upcoming peaceful protest, Lagos should also gear up because this time we will take our peaceful protest to every corner of Lagos state, Biafrans in Lagos should arise! the time has come to prove to the world that Biafra is not a terrorist or illegal organization…

Related Topics:BiafraIPOBNnamdi Kanu
Up Next

What Would You Do if N45 Million Was Erroneously Transferred to Your Account?