– The #AMVCA2016 have officially kicked off and this year the red carpet hosts are Eku Edewor and Ozzy Agu on one end, Helen Paul and Uti Nwachukwu on another while Veronica Odeka and Denola Grey are taking on the different styles in their Fashion Police corner.

– The official hashtag for the event has been announced as #AMVCA2016 and Eku Edewor and Ozzy Agu have taken the first red carpet selfie to kick things off. 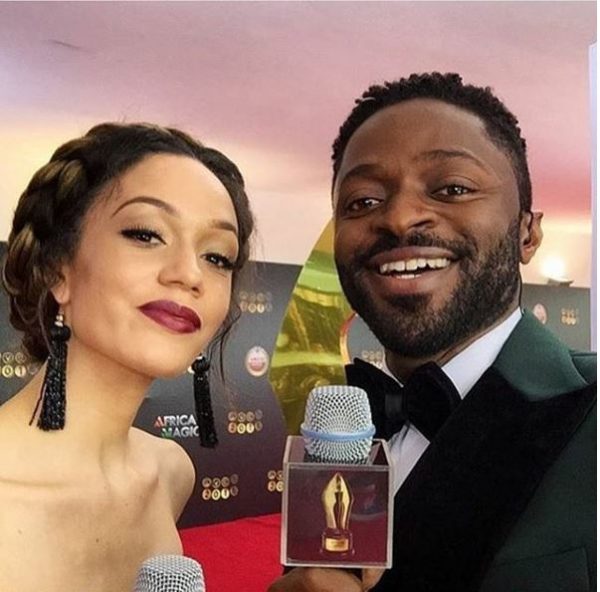 – Eku Edewor is having a chat with John Ube, who looks extra dapper in Tayor Gabriels

– Host of the night Ik Osakioduwa (in Mai Atafo) just walked the red carpet with wife, Olohi. Ik says “She looks better than I do” 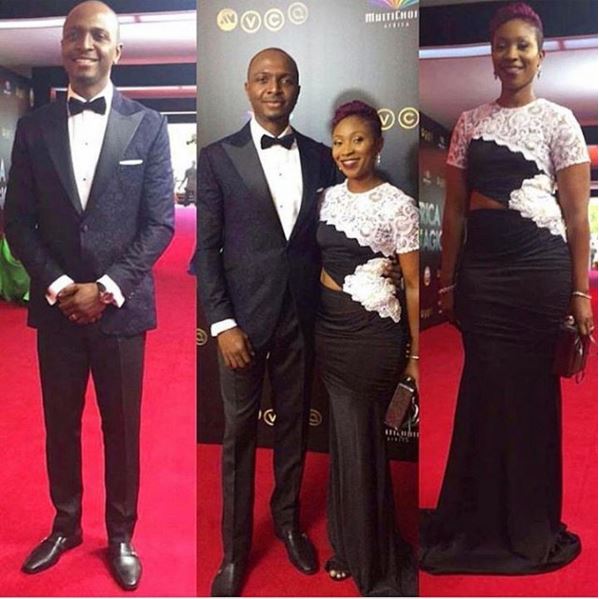 – The glam team, Veronica and Denola, have shared a quick recap of last year’s African looks from men.

– Meanwhile, on the inside, the final touches are happening. 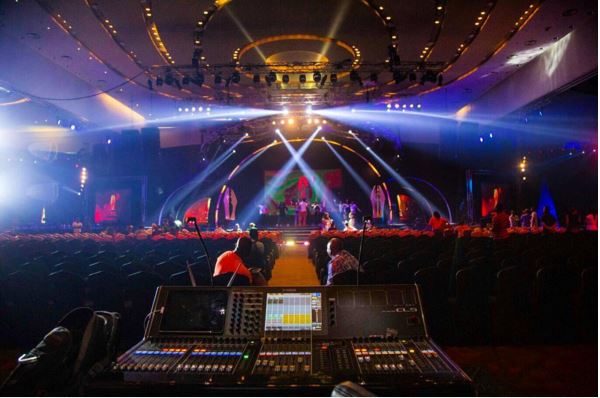 4:45 PM – Falz just stepped up on the red carpet in a mustard suit. He brought his hilarious accent along too.

5:02 PM – Another big star just stepped up on the red carpet. It’s Wangi Mba-Uzoukwu, the Director of Mnet West Africa. She’s styled in a gorgeous blue dress from Valerie Davis, accessorized with a Fendi clutch. On we should anticipate tonight she says a lot of work has gone into this year and it is a fun packed show.

5:02 PM– Helen Paul and Uti Nwachukwu are chatting with actress Mercy Aigbe Gentry who looks gorgeous in House of Liminee.

Wow! @mercyaigbegentry is stunning as she gets ready to walk the red carpet #AMVCA2016

5:06 PM – Opening act for the show Yemi Alade is on the red carpet with Ozzy Agu right now. 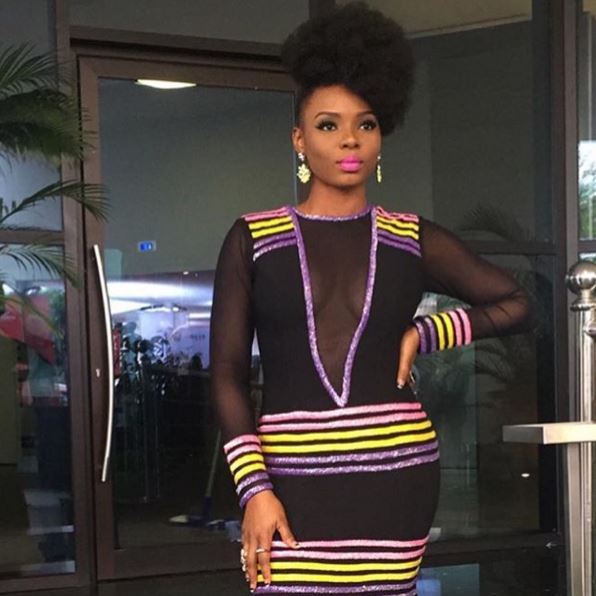 5:14 PM – And we are back with Mike Ezuruonye chatting with Eku Edewor on the red carpet.

5:18 PM – South African Minnie Dlamini is on the red carpet and she is dazzling. She will be co-hosting the show for the first time with Ik Osakioduwa. She says she can’t wait to feel the energy from the audience.

5:30 PM – Mai Atafo is on the red carpet with his famous tassled shoes. He’s talking about the men he has styled tonight – Ozzy Agu, Chris Attoh, Ik Osakioduwa and more.

5:34 PM – Be sure to keep up with all the fab styles on our Instagram page as well guys.

5:40 PM – Eku Edewor is chatting with Adesua Etomi who has been nominated for Best Actress for “Fallen”. Interestingly she already has her winning speech prepared, just in case. We love that.

5:47 PM – The red carpet is still going on. Blessing Egbe is chatting with Helen Paul and Uti about her movie “Iquo’s Journal” which is nominated. She says even if she doesn’t win, just being nominated is a win.

5:49 PM – Eku Edewor has Ramsey Nouah on the red carpet and she says he doesn’t seem to age. Is he a vampire? She wants to know.

5:50 PM – Ramsey Nouah just revealed he is doing a short film and a serial this year. Whoop!

5:53 PM – We just caught a climpse of Rita Dominic in Elvira Jude on the red carpet and she killed it. She looked so awesome that they are doing a quick recap of her AMVCA style. 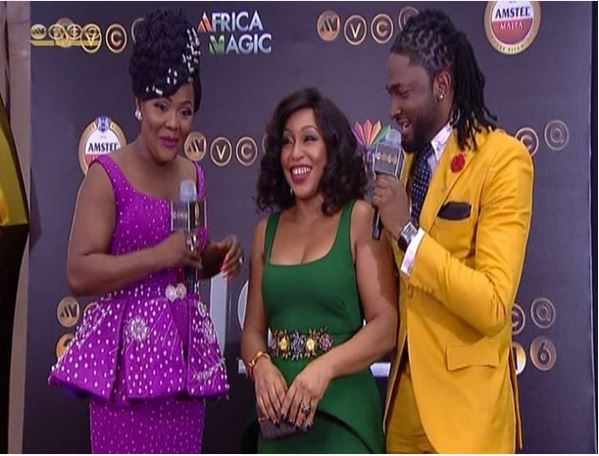 6:10 PM – Ego Boyo has a chat with Ozzy Agu, looking stunning in a piece from House of Deola. She will be presenting the “Merit Award” tonight.

6:16 PM – Stephanie Linus just made her first red carpet debut at the AMVCAs since having her baby boy 4 months ago and we have to say she looks gorgeous in a bedazzled green dress from Lisa Folawiyo.

6:20 PM – It’s a double does of hotness on the red carpet with Eku Edewor and Ozzy Agu as they interview both Desmond Elliot and Richard Mofe-Damijo. Trust us when we say they both look extra HOT. They two men are currently talking about their journey into politics.

6:25 PM – Blossom Chukwujekwu just stepped on the red carpet for the first time with his wife.

6:27 PM – Genevieve Nnaji is on the red carpet. She’s talking about her movie and her best friend Chinny. She says “Chinny is my strength when I’m weak and I’m her strength when she is weak”.  BTW, Genneveive is wearing a bedazzled dress from Tope FnR.

6:28 PM – The Fashion Police are giving their final opinions about the red carpet trends.

6:29 PM – Ini Edo is the last guest for the Jara team. She says her secret to a good laugh is a good joke.

7:00 PM – The main show has been kicked off with an African dance.

7:03 PM – Hosts of the night, Minne Dhlamini and Ik Osakioduwa are on stage to officially kick things off. Ik says Minnie is “unrepentantly sexy”.

7:04 PM – South African Minnie is showing us just how much she loves Nigeria by speaking Igbo.

7:15 PM …and the winner is Ariyike Oladipo for “Daddy’s Girls”

7:17 PM – Ozzy Agu and Stella Obinwa from Dubai Tourism present the award for “Best Makeup”. Dubai Tourism just announced they’ll be giving a business class ticket for two to both the Best Actor and Best Actress.

7:20 PM – The first performance of the night is from Tanzanian singer Alikiba.

7:33 PM – And we’re back as they present the nominees for Best Lighting.

7:35 PM … and the winner is Stanley Ohikuare for “Common Man”

7:37 PM … and the winner is Paul Michaelson for “Tell Me Sweet Something”

7:40 PM … and the winner is Marquez Jose Guillermo for “Dry”

7:42 PM – Presenting the award for Best Picture Editor are Yaw and Destiny Amaka.

7:43 PM … and the winner is Shirley Frimpong-Manso for “Rebecca” 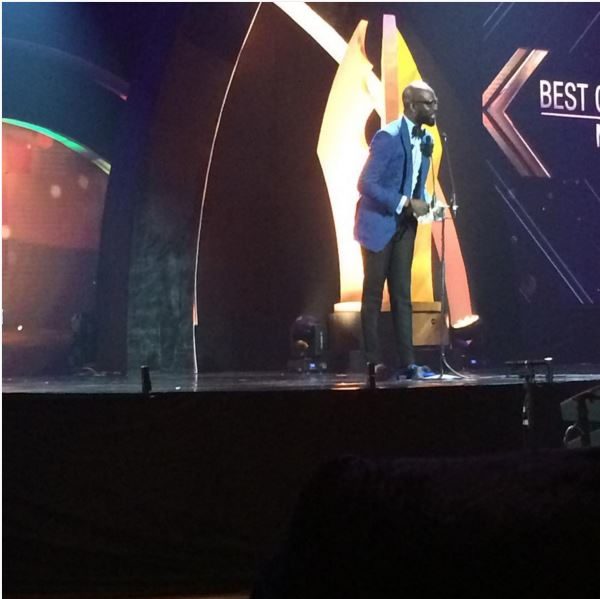 8:07 PM – And we’re back with the award for Best Documentary presented by Nse Ikpe-Etim and Femi Odugbemi. Unfortunately Femi did not make it to the stage so Nse presented alone. 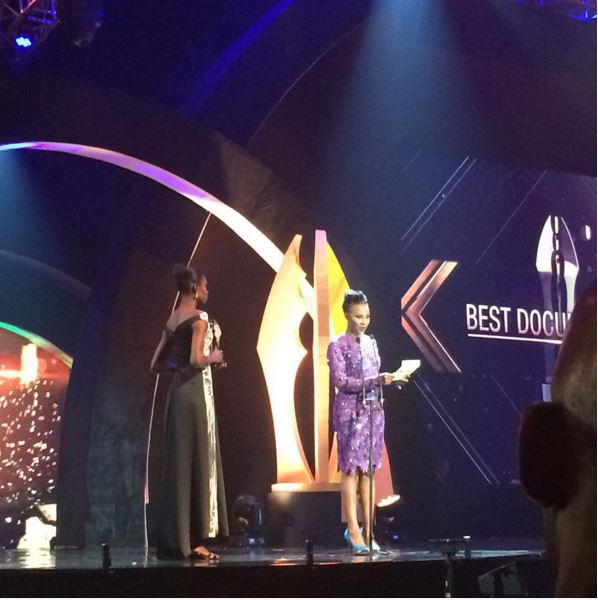 8:09 PM … and the winner is Remi Vaughan Richards for “Faaji Agbea”.

8:10 PM – The award for Best Supporting Actor in a movie or TV series goes to Sambassa Nseribe for “A Soldier’s Story”.

8:21 PM – Presenting the award for award for Best Actor (Comedy) are Chigul and Mr. Ibu 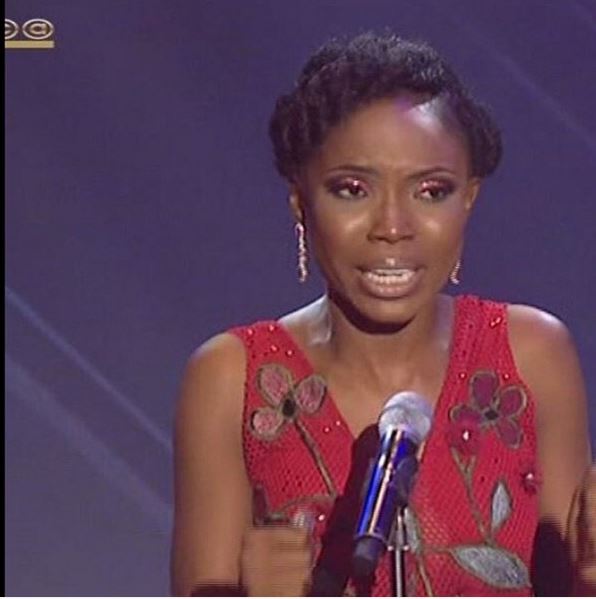 8:39 PM – Ego Boyo presenting the awards to two legends who have thrilled viewers in Nigeria for Decades. The 2016 AMVCA Industry Merit Award goes to Bukky Ajayi and Sadiq Daba.

8:44 PM – Industry veteran Bukky Ajayi is in tears as she gives her thank you speech. “I wish I could stand up. But if I stand up I will fall down. Are you all standing for me? Thank you. I am very very grateful to you.” – Bukky Ajayi

9:01 PM … and the winner is “Road To Yesterday” by Chinny Onwugbenu, Genevieve Nnaji & Chichi Nwoko

9:22 PM – With two awards to go, Flavour takes the stage for an energetic performance

9:29 PM … and the winner is Akin Omotosho for “Tell Me Sweet Something”

9:32 PM – Time for the most anticipated award of the night, Best Overall Movie.

9:33 PM … and the winner is DRY by STEPHANIE LINUS. She also wins a brand new car from GAC motors. Awesome!