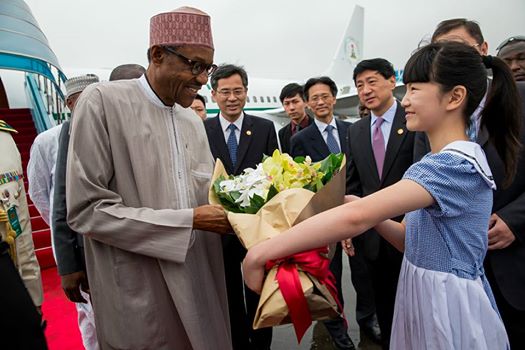 After Minister and former Governor of Lagos State Babatunde Fashola’s essay defending his boss’ foreign travel was published last week, today, the Minister of Foreign Affairs, Geoffrey Onyeama,  said the overseas trips embarked upon by President Mohammed Buhari were carefully selected in line with certain priorities and development objectives of the country.

The minister spoke in Lagos at a town hall meeting organized to brief the public on the activities of the government in the last 11 months.

He said the President was not embarking on the trips just for the fun of it, stressing that some of them were already yielding results for the progress of the country.

The minister also explained that some of the President`s trips to certain Western countries were at the invitation of these nations because they were moved by Buhari’s impressive credentials and goodwill.

The minister listed the United States, the United Kingdom and France as some of the countries whose leaders invited Buhari, based on his goodwill.

On Buhari’s recent trip to China, Onyeama disclosed that the purpose of the trip was to attract the much-needed investments in agriculture, solid minerals, as well as other important sectors of the economy. He added that in the face of falling oil prices, the country needed to diversify the economy and seek partnerships to strengthen it.
Onyeama said the trip was successful as it yielded investment commitments from the Chinese government and investors.

He said the Federal Government was committed to make Nigeria a strong voice in Africa and the rest of the world, and that the foreign policy of the present administration was to make the county a major player in the comity of nations.

#WorldMalariaDay – End Malaria for Good! Are we Winning the Fight? Share Your Stories