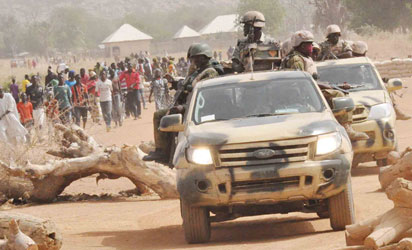 Some gunmen believed to be insurgents had on Tuesday morning ambushed the convoy of the Acting General Officer Commanding 7 Division Nigerian Army, Brigadier-General Victor Ezugwu and killed a soldier while leaving two others injured.

This is coming barely 24 hours after the attack on the 113 battalion headquarters in Kareto, Borno state. Click here if you missed it

The Nigerian Army confirmed the reports in a series of tweets from its verified twitter handle:

Although one soldier lost his life and 2 others were injured, they were able to clear the ambush, killing some of the terrorists and recovered  vehicle and weapons from them. The recovered items include a Toyota Hilux vehicle, 2 AK-47 rifles and several ammunitions.

The Acting GOC has continued his operational visit to Bama, while the body of the late soldier and the wounded have been evacuated to Maiduguri. The Chief of Army Staff, Lieutenant General Tukur Yusuf Buratai has also spoken with the GOC.

The Nigerian Army wishes to reiterate its unalloyed commitment and determination to continue to clear the remnants of the Boko Haram terrorists wherever they may be hiding.