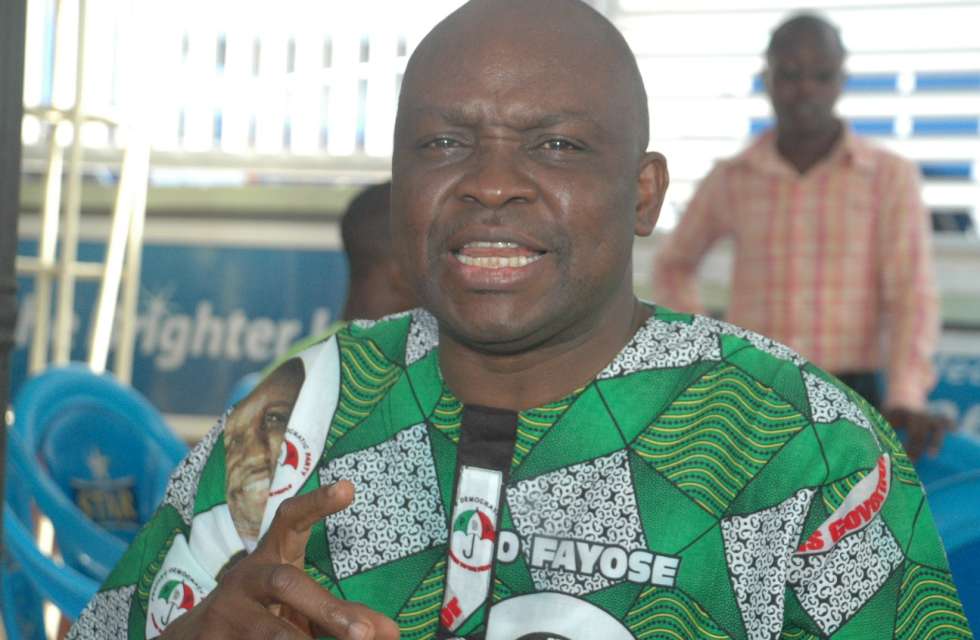 Reacting to reports credited to the Economic and Financial Crimes Commission (EFCC) linking him with funds funds from the Office of the National Security Adviser, Governor Ayo Fayose of Ekiti State has said that funds for his election was provided by Zenith Bank.

According to PREMIUM TIMES, the governor denied the report in a statement signed by his Chief Press Secretary, Idowu Adelusi.

“I have no financial transaction whatsoever with the Office of the National Security Adviser (ONSA) under Col Sambo Dasuki (rtd) and former Minister of State for Defence, Senator Musiliu Obanikoro either by cash, cheque or electronic transfer.

EFCC is only acting a movie scripted, produced and directed by the All Progressives Congress (APC) government of President Muhammadu Buhari just to silence me being a major opposition voice in the country,” Fayose said.

On the allegations he made against the wife of the president, Aisha Buhari, Fayose said:

It is on record that the President has visited USA three times and his wife did not travel with him. Equally. She ought to have visited USA last year September to chair a United Nations programme but she sent the wife of the Senate President, Toyin Saraki to represent her.

He went to to explain how Zenith Bank provide the funds for his election. The governor said:

The management of Zenith Bank, which majorly funded my election, called me to a meeting where I was assured that the fund would be provided for my election. I was asked to nominate a trusted ally to be related with and I nominated Abiodun Agbele.

All the payments into Abiodun Agbele’s account domiciled in Zenith Bank were directly from Zenith Bank.

Most of the funds posted into Agbele’s account were through the Ibadan, Akure and Lagos branches of the Zenith Bank and sometimes they brought cash.

Assuming but not conceding that cash moved from Lagos to Akure as being claimed by the EFCC in its usual manner of media trial, was meant for my election in Ekiti, why was the cash not moved to Ado Ekiti branch of Zenith Bank or the cash handed to me directly?

Why was it deposited into Zenith Bank, Akure and did the bank make any report
on the transaction to the appropriate authorities? Why did the bank send its bullion van to move the money from Akure Airport to their Akure branch if it was illegal money?

I must say it categorically that I don’t have any link financially with Obanikoro and I know as a fact that he (Obanikoro) has not; and cannot mention my name, as beneficiary of whatever money any company in which he has interest could have gotten from the ONSA if truly Obanikoro collected money from the ONSA as being claimed by the EFCC.

Therefore, bringing Obanikoro and his son’s narrative or that the Zenith Bank is telling different stories, having been blackmailed and coerced into submission by the EFCC is a joke that will not fly.

I wish to state further that if it becomes evidently clear that those who willingly provided money for my election can no longer stand by what they did, may be because of threat from the EFCC, I will not hesitate to name names.

Since we are now in the era in which financial assistance from Nigerians to fund elections is being criminalised, the international community, especially those funding EFCC must insist that the commission probes the funding of APC elections before further funds are released to the commission.

Most importantly, Nigerians are interested in the $60 million allegedly donated to the APC campaign by Sahara Energy, on which EFCC has been forced to suspend investigation.

I advise that they should keep their gun pounder dry and wait till the end of my tenure in 2018 and I want to assure them that I will be available to answer any of their questions, no matter how unreasonable.

Furthermore, Nigerians should know that I have been persecuted by the EFCC before, using phantom N1.2 billion poultry scam and I came out victorious. I was not only acquitted, I got N10 million judgment against the EFCC and my impeachment that was orchestrated by the EFCC was quashed by the Supreme Court.

Nigerians should recall that it was part of this plot to get back at me because of my critical stance on Buhari’s government that the Ekiti State House of Assembly was invaded by men of the Department of State Service (DSS), placement of travel ban on me and lately, illegal restriction placed on account by the EFCC.

I therefore make bold to state that in the overall interest of democracy and well-being of Nigerians, I will continue to speak my mind on issues bordering on governance in Nigeria. I will not be intimidated.