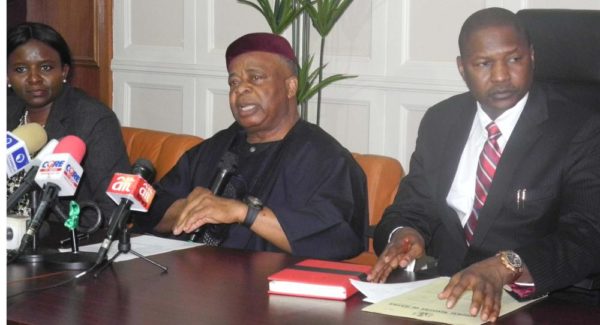 PIC 3. FROM LEFT: SPECIAL ADVISER TO THE PRESIDENT ON JUSTICE REFORM, JULIET IBEKAKU; CHAIRMAN OF THE COMMITTEE, SEN KEN NNAMANI AND THE MINISTER OF JUSTICE, ABUBAKAR MALAMI (SAN) AT THE INAUGURATION OF THE COMMITTEE ON ELECTORAL REFORM IN ABUJA ON TUESDAY (4/9/16)
7333/4/9/2016/DEBORAH BADA/ICE/NAN

The Attorney- General of the Federal and Minister of Justice, Abubakar Malami on Tuesday inaugurated a 24-member committee on Constitution and Electoral Reform.

The minister, who inaugurated the committee, said he was directed by President Muhammadu Buhari to set up a committee.

He said that Buhari had in his inauguration speech stated his desire to deepen the country’s democracy and entrench the culture of an enduring electoral system.

“It is important to evaluate our democratic journey thus far with a view to fashioning out a more enduring system that will serve present and future generations,” he said.

He said recent judicial decisions have shown that there is urgent need to scale up confidence in the electoral system in Nigeria.

He decried a situation where electoral officials were killed or kidnapped and where politicians make the environment for elections a war theatre.

The minister said that this had forced the electoral body to seek extra-security measures to protect their officials, noting that this called for serious introspection and bold legal, legislative and institutional action.

He said that the committee was expected to look into possible amendments to the Constitution and Electoral Act and come out with a more robust and generally acceptable electoral system.

“The committee is also advised to take a holistic look at the recommendation of Justice Uwais Electoral Reform Committee,’’ he said.

Malami advised the committee to consult far and wide, and in particular with National Assembly and judiciary in order to make recommendations that would stand the test of time.

He expressed the hope that the committee would turn in a report which depth and quality would resound for years to come and would facilitate the re-engineering of the electoral practice.

He said the terms of reference of the committee are to review recent judicial decisions on election petitions as they relate to conflicting judgments and absence of consequential orders.

The Chairman of the committee, a former Senate President, Senator Ken Nnamani, said he is confident that Buhari would enhance democratic structures in Nigeria