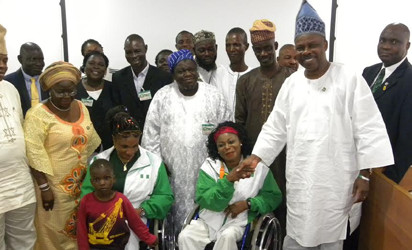 Governor Amosun in Handshake with Latifat Tijani after the donation

Governor Ibikunle Amosun of Ogun state has donated N1million and training kits to Latifat Tijani, an indigene of the state who won silver medal at the last Paralympics in Rio, Brazil.

The governor, who announced this on Wednesday during the State Executive Council meeting at the state secretariat in Abeokuta, also donated N500,000 to her coach, Kemi Oyebola.

On the request of the athlete, Amosun also directed the Secretary to the State Government, Taiwo Adeoluwa, to collect the curriculum vitae of her husband, Oyeleke Tijani, for consideration for employment.

Amosun described Tijani as a worthy ambassador who had done the state and the country proud.

He challenged the athlete to ensure that she wins the gold medal at the next Paralympics in 2018.

Responding, Tijani commended the governor for the honour and the donation.

“I thank the governor for this honour which has been bestowed upon me today. I had earlier lost hope in sports but the good God has revived that hope with my invitation to the national camp and my performance at the Paralympics. Now, I know I still have a bright future in sports and I will continue to work harder to improve on my performance and to ensure that I return with gold medal at the next Paralympics,” she said.

She, however, urged the governor to ensure that the training facilities for weightlifting at the Sport Council were upgraded to enable the athletes perform at their optimal.

Tijani, an indigene of Abeokuta North Local Government Area, competed in the 45 kg category in weightlifting at the Paralympics at Rio and lifted 106 kg to clinch the silver medal.

This comes days after Governor Rochas Okorocha of Imo state donated a saloon car and N1 million each to Roland Ezuruike, Nwosu Ndidi, and Orji Josephine who all won Gold during the Paralympic Games.