It’s the Biggest BBQ Festival in Nigeria! Jack Daniel’s “Brothers of the Grill" Music BBQ Festival is Back| Saturday, November 12 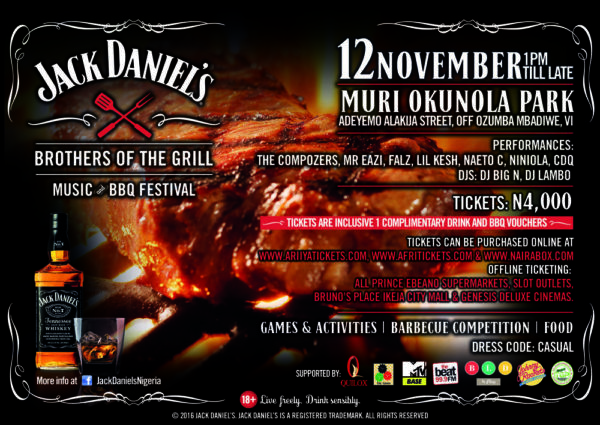 The Jack Daniel’s “Brothers of the Grill Music and BBQ” festival is back and will be way hotter!

It’s no secret that Jack Daniel’s hosted the biggest BBQ festival Nigeria has ever seen back in July this year with top acts like Timaya, Reekado Banks, Runtown, The Compozers (From the UK) and many more. The talk of the city BBQ festival also featured vendors who cooked all things grilled and smoked.

Come 12th November, 2016, Muri Okunola Park will be transformed once again for all friends of Jack. This edition will feature The Compozers (UK), Mr Eazi (Ghana), Falz, Lil Kesh, Naeto C, Niniola, CDQ, DJ Lambo on the music stage while the MasterGriller BBQ competition with N750,000 up for grabs will take place on the other stage.

With tickets for only N4000 (inclusive of Jack Daniel’s cocktails, BBQ servings) you can have the time of your lives!

Aside delicious barbecue and food available; the amazing cocktails from the Jack Daniel’s family of whiskeys will be available for purchase at the outlets Quilox, Grind Grill, BLD by Play, Johnny Rockets and Grasshoppers Place.

It’s about cooking meat with fire and smoke, chowing down together on a big table with family and friends while listening to great music.

Jack Daniel’s association with grilling has spanned over 25 years with The Jack BBQ Competition. For more info follow Jack Daniels on social media www.fb.com/jackDanielsNigeria or @JackDaniels_NG.

This event is supported by MTV Base, The Beat 99.9 FM, The Grind & Regno Media.

Related Topics:Jack Daniels
Up Next

From Feeling Unpretty to Faking Orgasms! We Had a Blast at Atoke’s “Friday Night Banter”