PA to the President on New Media, Bashir Ahmad Pulls out of New Media and Governance Conference Due to Statements made about Bobrisky's Attendance

Personal Assistant to the President on Media, Bashir Ahmad, has confirmed that he will not be speaking at a New Media and Governance Conference, the same conference that Idris Okuneye aka Bobrisky was scheduled to speak.

He had earlier alluded to his non-attendance when a twitter user begged him not to attend the Conference. 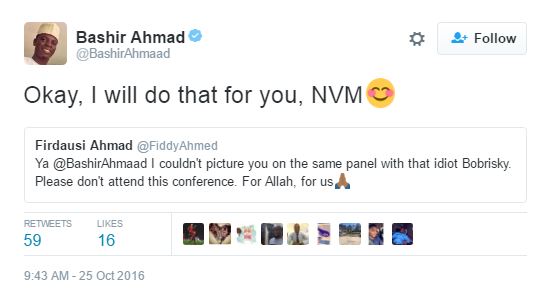 Via an official statement, Bashir says he will not be available for the event and has thanked them for the kind invitation.

I have received several messages and calls from friends, tweeps and even colleagues in the media on my attendance at the NMGC Conference.

Most commending me for ‘rejecting to share the same podium with Mr Idris Okuneye popularly known as Bobrisky’; others decrying my non-attendance.

Indeed, I will not be attending the NMGC Conference tomorrow, and have since communicated that to the organizers.

I thanked them for the kind invitation and they also respected the fact that I would be unavailable for the event.

You may contact the NMGC organizers for more details.

One of the personalities that was also supposed to speak at the event is Subomi Plumptre of Alder Consulting pulled out yesterday as they said “The inclusion of Bobrisky Sensationalises & Radicalises the Discourse”.

Gala Just got Even Bigger as Gala introduces “Gala Mega”