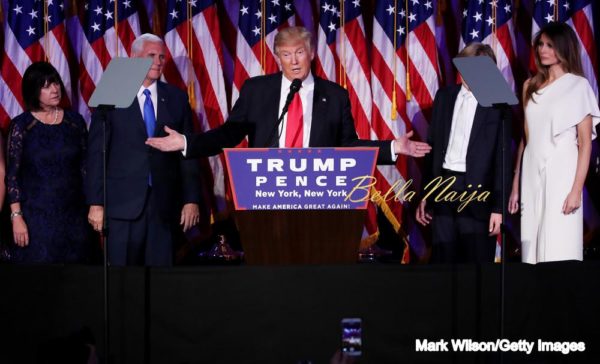 Russia’s president, Vladimir Putin has sent Trump a telegram to congratulate him, declaring his “hope to work together for removing Russian-American relations from their crisis state,” BBC reports.

Also, UK Prime Minister, Theresa May, in a statement on Wednesday, congratulated Trump on his victory.

“I would like to congratulate Donald Trump on being elected the next president of the United States, following a hard-fought campaign. Britain and the United States have an enduring and special relationship based on the values of freedom, democracy and enterprise. We are, and will remain, strong and close partners on trade, security and defence. I look forward to working with President-elect Donald Trump, building on these ties to ensure the security and prosperity of our nations in the years ahead,” she said.

Palestinian President Mahmoud Abbas and Egypt’s President Abdel Fatah al-Sisi have also congratulated Trump, who will be sworn in on January 20, 2017.

“Maybe it is time to stop running to America every time we have a problem in our own country” – Di’Ja weighs in on Donald Trump’s Victory in U.S Presidential Poll